It used to be so much easier to review superhero video games. It was a well documented fact that you could count on all of them to be terrible. Then, Batman: Arkham Asylum came out of nowhere and not only immediately established itself as the greatest superhero video game of all time but entered the discussion for best video game ever. Those types of surprises just don’t come along very often in an industry full of rabid fans and journalists who will chew the very bones of any news story related to their favorite characters and franchises. Before Arkham Asylum, the only thing less likely than the existence of a great Batman video game was that a great Batman game could come from an unknown studio. Now, here we are in 2011 and Rocksteady has followed up Arkham Asylum with Batman: Arkham City. We now exist in a world with 2 great Batman video games.

A Tale of Two Arkhams

Batman has gotten so effective and efficient at his caped crusading that Arkham Asylum is once again bursting at the seams with baddies and crazy criminal kingpins. Every villain a Batman fan can think of is currently incarcerated at Arkham. I’m guessing Dr. Hugo Strange used some of that logic to miraculously convince Gotham City’s finest to allow him to expand Arkham Asylum into an entire city. That doesn’t sound quite right to Batman either, so he decides to find his own way into Arkham City and get to the bottom of Strange’s peculiar plan. Along the way, Batman must confront a few of his famous foes from the asylum as well as those supervillains who were left out of the island fun the last time around. Batman has an entire prison city in the way of his investigation, and Arkham City is filled to the brim with the worst Gotham City has to offer. It’s time to break out the bat toys. 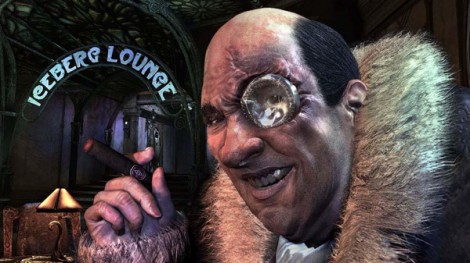 The setup is, thankfully, the most ludicrous plot point. In the end it serves as setup for the action and the necessary means to what is already my new favorite Batman story. I came to Arkham City for exacting Batman’s physical brand of skeletal augmentation, but it’s the narrative itself that left the real marks on me as a player. Without giving any specific highlights away other than advising you to finish the main story, I have to commend the writers for continuing to ground Batman in gritty realism while still being able to provide fantastical comic book moments.

Nothing better exemplifies the world of Batman: Arkham City than the gravity of Rocksteady’s version of the Penguin. Rocksteady managed to make that weird little man an intimidating villain, which is a feat in and of itself, as the character has had a lot of hits and misses over the years. We are granted a truly twisted gentleman who is despicable in all the right ways thanks in no small part to Nolan North’s voice acting performance. The variety of villains in Batman: Arkham City would have made it easy for Rocksteady to skimp on more than a few, but every single supervillain encounter is among some of the best conflicts I have ever experienced in video games or in other media.

Who is in charge here?

While it is tempting to wish for more out of each portion of the story, the real strength of Batman: Arkham City is its sense of balance in knowing how to keep the player entertained without being overwhelming. The fact that the beats of the main story manage to be individually interesting and weave together without one character outshining or weighing down the rest (outside of the final arc) is an enviable accomplishment. Rocksteady did well to build off of the weakest portion of Arkham Asylum by assembling a cohesive tale rather than a series of loosely connected encounters in the same general location. The only misstep is in the sheer number of Riddler trophies, but thankfully those are entirely optional. In short, Arkham City feels alive and dynamic as you progress in the story. Batman directly affects which supervillains are fighting with whom and which ones are in charge of individual territories within the city. 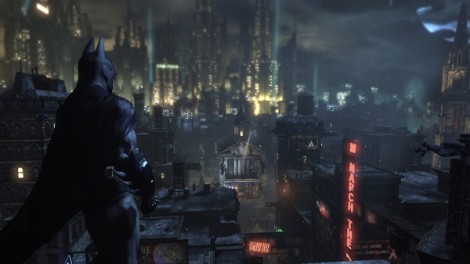 This is my kind of town.

So what the hell does all of that mean to the player? Simple. It has never been easier to lose yourself and become The Batman. The fundamental gameplay elements that made it so easy to get into Arkham Asylum are all here. The brilliant fighting system, gadgets upon gadgets, the detective work and now plenty of open rooftops to glide between as the Dark Knight. Initially, I was a bit worried, as the fighting system itself feels a bit floaty. Finishing moves and individual punches did not feel as impactful as I remember from Asylum, but soon enough, I lost myself in the flow of battle and the difference never crossed my mind again in game. Chalk it up as a necessity due to the increased scale of the game world. Whether or not the hits feel as heavy, the control and execution of each punch, quick gadget release, or counter is polished even further than I expected. Batman can take down 30 foes at once when you are focused, but get sloppy and just 2 thugs can bring you down quickly. That’s what makes the fighting system so brilliant: it pushes you to be a superhero while reminding you (without frustrating you) that you are human. There may not have been much room for improvement to the fighting system, but Arkham City succeeds in being better than its predecessor.

They are still wonderful

The true thrills of being Batman come only after a little practice. Mastering all of your moves and gadgets so that you can become the perfect fighter in-and-out of the challenge rooms still requires dedication. The mastery curve involved in flawless fighting is quite satisfying and is also complimented by a less-daunting but still necessary learning curve to Batman’s traversal skills. Gliding and grappling effortlessly through Arkham City will take an hour or two to get used to, but the payoff feels authentic to this iconic superhero. Being able to pick your perch and subsequently pick off your prey in the manner of your choosing is justification enough for a few early failures while learning to fly.

Awesome, but not really detective work.

The other side to being the Batman is his legacy as the world’s greatest detective. I did use a lot of the detective vision mode while planning my fighting tactics, but the detective missions themselves are an acquired taste (one that I love) that are mainly relegated to side missions. This is one area that could bring about a whole new type of Batman game; from scanning crime scenes to following a trail of a specific chemical compound to solving one of the Riddler’s puzzles, it is all a great change of pace. While I understand why more of it isn’t integrated into the main story arc, it does make your detective skills feel more like an afterthought in Arkham City.

This starts to reveal the minor flaw in Batman: Arkham City and the major difference between it and Arkham Asylum: the open world design allows the player to lose focus on the reason they are in Arkham City. This flaw is only truly displayed after the shining strength of the story comes to fruition. In the end, it comes down to a subjective opinion on whether or not the player wants a guided and linear game or  the freedom to explore. Batman: Arkham City allows for the player to play out the full scope of Batman’s abilities and it is thrilling to tactically and stealthily take down groups of thugs from the rooftops. It’s an experience that, as a gamer and as a Batman fan, I completely lost myself in in the best ways possible. However, while I’m off toying with Two-Face’s thugs or solving some random riddle, the main storyline and the side missions all wait for the player to progress. There is no sense of urgency, no sense of choice or threat of failure to your overall goals. You can blow through the main storyline in a handful of hours, or you can get lost in the city for days and come back to them when you are ready. In that sense, like other open world games, I did feel as if I was playing two different games, I was either on the main story track as Batman at his finest or I was playing around in Arkham City as Batman experimenting with his toys. This contrast does not prevent either side from being great, it only prevents the whole from being perfect.

Sidenote about the Catwoman Pass and upcoming/exisiting DLC – I played through the Catwoman levels and enjoyed them on their own and her as a playable character. These add-ons are just that: they are additions to the core game, not the game itself, so they do not enter into my overall opinion of the game itself. It is of my opinion that the sloppy delivery of this content and subsequent marketing of the pieces themselves should be noted but not held against the core game.

Where did he go?

Greatness is not something Batman: Arkham City takes lightly as it proves itself time and time again with its attention to detail. I was especially impressed with the level design of the major fight encounters throughout the game. Each new scenario forced me to break away from my previous tried and true methods of stealth to clear out a room. The stages with multiple floors and, in particular, one later in the game where you are fighting inside and outside of a building made for some memorable creative problem solving moments for tricking my armed enemies into isolation. Even the voice acting of the thugs was well done and varied. Scattered throughout the game are some genuinely entertaining enemy banter both when they are trying to find Batman and when they have no idea he is around. This is all brought together further by solid sound design (especially around explosives and noise making gadgets) as well as a fantastic ambient soundtrack that could work right along side its cousins from the recent Batman films. 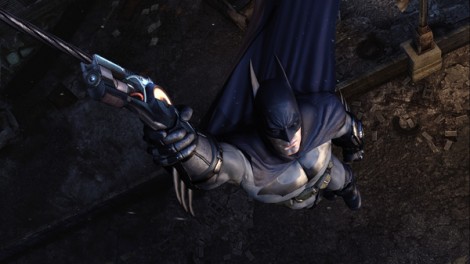 You know where to find me when you are ready.

Batman: Arkham City is everything a sequel should be and it also stands as a great video game that any action fan should try whether or not he/she played the original. While Batman: Arkham City does not succeed in dramatically breaking through the standards that its predecessor set for character action games, it did raise the bar again without having any competition in sight. Provoke the Batman, I dare you.