Being a subscriber to SEGA Channel had plenty of benefits. Not only was I the envy of my friends, but I was able to play a lot of titles over time. One of the titles I was most fond of was Mutant League Football. This game should be revived because the sports genre has become stale and, at times, boring. Who wouldn’t want to have a feature in Madden where you could take Tom Brady out via decapitation? I think, now more than ever, the entire sports genre needs a major change of pace.

I bring up Mutant League Football now because this series constantly gets overlooked in any discussion about 16-bit remakes. No other series allowed aliens, skeletons, robots, trolls, and super humans the thrill of victory. These odd world heroes deserve the chance to relive their glory days. You may be unfamiliar with the Mutant League because the game was a diamond in the rough. The concept is ridiculous but the gameplay doesn’t disappoint. The game is filled with pitfalls, traps, bribes, and plenty of death. Mutant League Football gave the term throwing a bomb a whole new meaning.

Give Zombies a Chance

First things first: what mutants we will allow into the newer titles. The original title was very limited with its mutant offerings. I like to think that our society has become more progressive in the last 20 years since its release. Therefore, I think that we should open up the arena to all monsters (at this point we should probably consider changing the game to Monster League Football). The game should expand upon the original’s gameplay elements by adding special abilities to each monster type. Each special ability would add a strategic element to the gameplay.  Say, for instance, we allow vampires into the league. Vampires would not be allowed to play games during the day, but would be able to change into a bat during the game, which would be very helpful if your vampire is playing running back. Werewolves would also be offered their shot at gridiron glory. They should be granted the ability of super speed, but can only play night games. Zombies would be given an extremely large amount of hit points making them very difficult to kill, but they just midlessly roam around the field. This could potentially lead to a lot of offside penalties due to their lack of understanding anything outside of consuming brains. 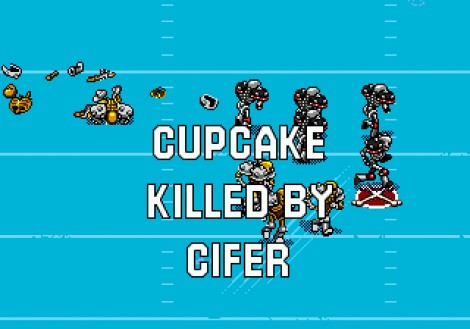 Cupcake will come off the IR once he is resurrected.

Here are some other additions to the rosters to help improve the diversity of this league:

When it comes to the overall gameplay, the new Mutant League game should run on the old NFL 2K football engine. Someone has to use it, right? This would make it very clear that this game is NOT a Madden title; the 2K engine had a great flow that would work well for this title. The play calling system would need to revert back to the simplicity everyone loved with games like Tecmo Super Bowl. This game is meant to be more about dismemberment and outrageous situations than it is about a 3″, 3-ring binder full of plays. The on-field traps would have to stay, though. (Yes, traps). The original featured traps that would take players out for the entire game should not only remain, they should be expanded beyond normal pitfalls. Just think about it: bear traps, fire pits, spikes, electrical wires in water…the possibilities are almost endless.

Each arena would have to be unique, too, like classic horror story locations with their own unique traits! There would be a stadium set in the shadows of Dracula’s castle with the occasional bats swarm, obstructing your ability to see and Dracula as a micromanaging owner (like Jerry Jones).  The swamp people would get their own swamp based stadium, which would include huge puddles for that would slow down monsters (with the exception of the swamp people.) If witches made it into the game,  their stadium would need to be, where else? Salem, Massachusetts! The hazard should be obvious – angry mobs with pitchforks and torches in hand. Even though Philly has its own NFL team, it should probably be featured as having a Monster League stadium populated with living, breathing Philly fans as the hazard. Why Philly and not New York? New York fans don’t throw batteries at Santa when their team is doing badly. 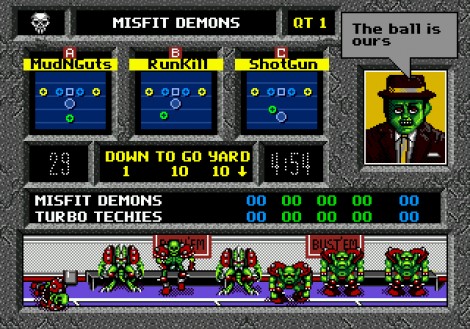 As for the football side of the game, we would include trades, free agency and retirements and the originals title’s ability to bribe or even kill the ref. (The dead referee was replaced by a much tougher and less forgiving ref.) Since each stadium has a special feature, I’d make sure that each team has a special feature related to its stadium. Regardless which team you use, though, if a player dies in the game, he’s not available for the next game. The resurrection process would take at least one week, but I’d remove the rule that a team must forfeit the game if you lose too many players to field the full team. It would be harder and more entertaining if players had to be come iron man athletes and with the additional possibility that teams would have to play a man down, which leads into integrating gradual injuries. For instance, let’s say your wide receiver took a nasty hit and lost an arm. He would still be able to play, but would have to continue with only one arm. This mechanic would take playing through injury to a whole new level. Each player would have a regeneration rating, which would govern how fast your wide receiver would get his arm back. If the regen rating is low, your receiver might play the next game with an arm and a stub.

Like in the original, trick plays would be more about destruction than deception – the original Mutant League Football had trick plays that would make the other team literally confused or result in throwing a football shaped bomb at a defender. Trick plays for the remake need to up the ante, but with the added strategy element that certain species would be immune to specific tricks. One trick play could be blocking out the moon for the rest of a drive, or making the sun come out for an entire drive, making werewolves and vampires completely impotent. Retaining strategic elements would also help keep the game challenging and add some depth while retaining the core experience of a football game, but keeping the title one-of-a-kind.

We shouldn’t force these ghoulish athletes to just play one sport – if Bo Jackson and Deion Sanders could be two sport pro athletes, then why can’t Frankenstein’s monster get his shot at multiple opportunities?! I love the idea of playing a baseball game and literally taking the head off of the batter with a bean ball or having to swap pitchers because your starter’s arm fell off. Just like football, the baseball field could be littered with traps as well. An outfielder would need to be verrrrry cautious when climbing the wall to rob a home run or he might brush against the disguised electric fence, hit the trigger to cause it to erupt into flames, or get impaled by rusty spikes. A whole franchise based around mutant/monster athletes has tons of potential. 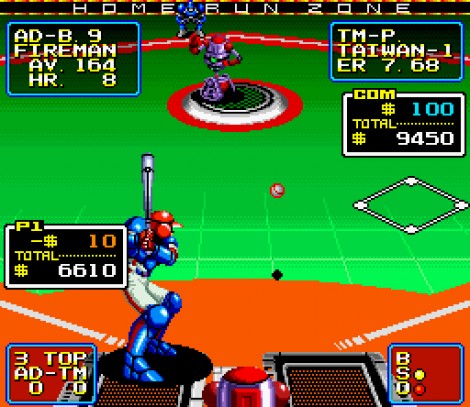 The more I think about it, the more we need the Mutant Leagues now. Sports games are becoming hyper realistic, so we need a sports title that will bring back the classic fun these games featured. I’m also pretty sure that a sports league comprised of monsters would have less labor relations issues than today’s athletes. We wouldn’t see the excessive arguments about compensation, that’s for sure. Think about it: most of the participants are dead (or undead) so money would be worthless to them. Zombies would be paid in brains. Vampires would be allowed limited but fair access to the blood bank. Mummies wouldn’t need money because most of those guys were filthy rich before they died. This game may sound ridiculous to you, but I see Grimmy written all over this one.