The Adventures of Bayou Billy might have flown under many radars when it was first released in North American in June of 1989. It had previously been released under the nom de guerre “Mad City” in August 1988 in Japan, where surprisingly it was much easier than its region 1 counterpart. Because Bayou Billy was so difficult, most people don’t remember the variety of gameplay options it brought to the table, combining genres for the first time.

My own experience with Bayou Billy came when my uncle took me Christmas shopping. I could have chosen any game I wanted, yet I chose The Adventures of Bayou Billy. (Another Christmas I chose Bart vs. The World. Clearly I didn’t know what the hell I was doing even though I was a subscriber to Nintendo Power.) That being said, I must have really been into Crocodile Dundee at the time because I know of no other reason why Bayou Billy would appeal to me other than the pretty sweet box art. Then again, most of Konami’s games at the time had awesome box art. 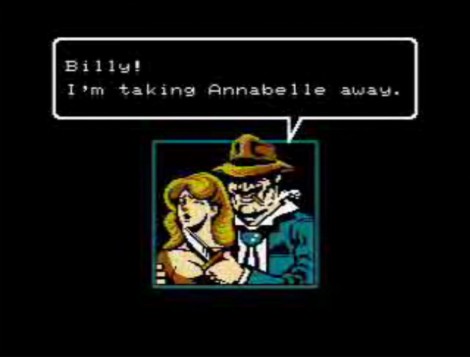 There's always a dastardly villain out there to steal your girl

The Adventures of Bayou Billy put you in the role of Billy West, who is out to rescue his girlfriend Annabelle Lane from the gang of Godfather Gordon. It only took a nugget of an idea for a story back in the 80’s and often it involved a dude rescuing his helpless girl. So, basically, Bayou Billy is Double Dragon set in Louisiana. Hell, the names of the characters are even the same. While there isn’t much in the way of story, it wasn’t that important. Back then, gameplay was the most important thing. Clearly Konami had good ideas but bad execution.

The variety of gameplay is what really struck me as I played Bayou Billy. Even though I never beat the game because of its insane and inane difficulty, I enjoyed the different gameplay styles. To my recollection, there had never been a game that combined the beat-em-up, driving, and shoot-em-up genres in one package before Bayou Billy hit store shelves. All told, there are ten levels total: 6 street fighting, 2 light gun, and 2 driving. The fighting stages were pretty typical of the era and genre. There are different weapons, like the knife, that you could pick up to help you defeat gang members. (The bulletproof vest is an essential pickup if you plan on getting to the next levels.) Even with those items, it was extremely hard to get past the early street fighting stages – getting to the first jeep driving level always made me feel like I had accomplished something great. 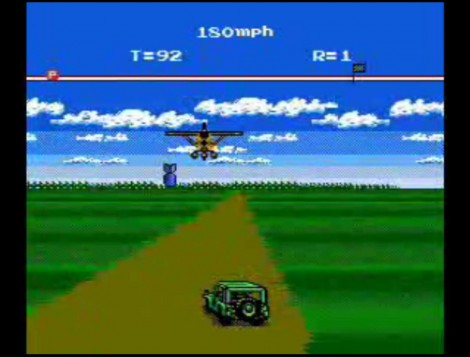 The Jeep driving stages were always my favorite and yet, I rarely passed them. When driving from the swamp to the city you have to dodge enemy vehicles, road hazards and airplanes. Yes, airplanes. The goal is to survive before the time limit runs out. It wasn’t so much a race as a survival driving simulator with machine guns and grenades, because the smartest thing to do while driving a Jeep through the backcountry is lob grenades at airplanes. Yes, airplanes. Gasoline canisters do what they do in real life: give you more time. It is very wise to pick those up along the way. Did I mention airplanes? You’d think gangs would just sit back and defend the fortress where the girl was held captive instead of sending wave after wave of goons Billy’s way. That would be the smart move, and a really easy game until the final level. Maybe Konami knew what it was doing after all.

The last type of stage is the shoot-em-up, which put you in the shoes of the titular hero. It was an early first person shooter, if you want to call it that. It was very much like the arcade shooters of old but in the comfort of your own home. The great thing about these stages was you could either use a regular controller or the Zapper. The goal of the stage was to defend yourself from other stooges as you conserved ammo on your way to the boss. If you didn’t have enough ammo at the end, you had no hope. Power-ups such as bullets and first-aid kits were sprinkled throughout the level to help you reach your goal. And, just like in every other shooter, the best way to get the power-ups is to shoot them. There is also an hourglass power up which gives you infinite ammo for a short, very short, time period. 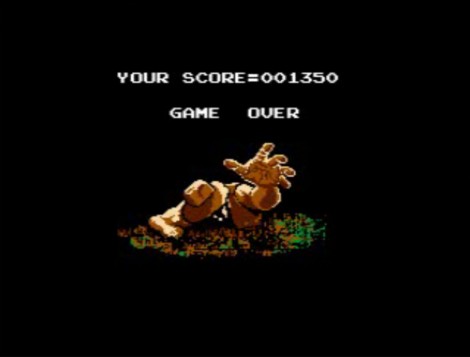 Sadly, the best remembered screen of the entire game.

If you look at The Adventures of Bayou Billy on the surface, it seems like it would be an interesting game which used different genres, stirred them into a pot and out came a decent game. But the fact that Bayou Billy was so flipping hard was the really standout feature. Being that hard wasn’t a good thing. Nowadays, when Japanese games come over now, the games are made easier for American audiences. Was Bayou Billy a main cause of this? Did enough Americans complain about the difficulty that it changed the landscape of Japanese imports? I don’t know if I could give Bayou Billy that much credit, but it did make an impact on my young gaming life. It was also the first game that made me throw controllers in frustration.