Right around Halloween, I somehow found out that The 7th Guest was available on iOS and, despite my well-known distaste for all things Apple, I quickly realized that I was going to need to borrow my fiance’s iPad and get back into a game that I hadn’t played in almost 20 years. Getting back into an old game, particularly one that was one of the first crop of, “Holy crap, video games are way more than just platformers/top down shooters/beat-em-ups” along with Myst can be a precarious undertaking. Just as the reinvigoration of  simple side-scrolling platformers like Super Meat Boy and ‘Splosion Man don’t reinvent the wheel but instead showed you what 3 decades of gaming development can do for things like controller responsiveness and smooth framerates in comparison to their spiritual precursors, getting back into a first person mystery/puzzle game when the genre has all but died out can make you question your memories of how good the game was in the first place. With that in mind, I steeled myself for ruining a perfectly good childhood memory. 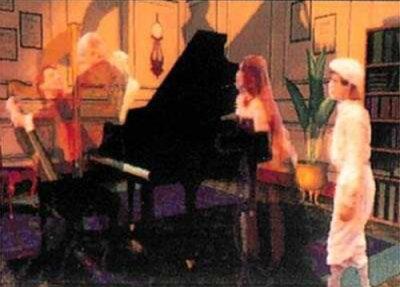 To set the stage: I never actually owned The 7th Guest. My best friend did and so I only got to play it at his house, but as a 12 year-old, the introduction of full-motion video and the life-like (for the time) setting coupled with innovative puzzle solving in a creepy atmosphere really resonates with me today as a watershed moment in my gaming timeline. If you’re unfamiliar with The 7th Guest, you play as a man being paid to spend the night in a haunted mansion by the house’s mysterious owner. It puts you in a first-person setting and you click around the house to move from room to room, dragging the skeletal hand cursor over the screen looking for click-prompts to trigger either ghostly apparitions who drive the story line or puzzles needed to solve how 6 guests were killed, leaving their ghosts behind. 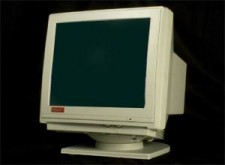 Conveniently filled with mercury and held under explosive negative pressure!

Getting back into it was, as I expected, a little rough. Even with the totally-smooth frame rate of the iPad (the original jumped and stuttered on a 2x CD-ROM), I could tell how primitive the game was after all of the time that has passed. The acting was pretty atrocious, there are absolutely no (worthwhile) hints for some of the puzzles and figuring out where to go in the mansion is an exercise in nothing more than trial-and-error. Let’s keep it in perspective, though – in 1993, when the game was released, the 16-bit systems were beginning to hit their stride in the US and CD-ROMs were just beginning to show up as a common storage medium. If memory serves correctly, I think we played it on an Intel 486 DX running at 33 mHz with a megabyte or two of RAM, but it might have been the first round of Pentium chips, so what Virgin Interactive (publisher) and Trilobyte Studios (developer) accomplished was actually pretty impressive.

With criticism duly noted, the game is still a lot of fun to play, although some of it is due to a factor I’m sure Trilobyte never intended: the “camp” or “cheese” factor. First off, though I got stuck on one of the puzzles for a while due to a useless explanation and cryptic hints, the puzzles are still clever and fun. Since it was originally a point-and-click game, it’s translated well to the tablet interface (not least of all because, unlike today, the monitors it was played on were 60-pound CRT behemoths with 13- or 14″ screens, so the screen size isn’t an issue.) Dragging your finger across the screen feels as natural as tapping to activate cut-scenes and puzzles (mostly; some of the interfaces are a little unintuitive, but that was a fault present in the original game, too).

That cheese factor? It’s there in spades. The gaming industry was growing and making some of the bigger dev houses boatloads of money, but it was nowhere near the multi-billion dollar industry powerhouse that it is today, so budgets to do things like hire a well-pedigreed professional acting crew with real cinematographers, directors  and costumers just wasn’t in the budget. So…when you’re watching one of those plot-explaining cut scenes where a badly-digitized ghost acts out his last moments? It’s hysterically bad. Imagine if Mordin Solus were replaced by your gangly physics teacher from high school who acted your small town’s community theater troupe and his alien costume was a rubber mask from the left-overs at the Halloween store and you’ve got the right idea. It’s over-acted, the period-piece costumes are horrible and sometimes you get the feeling that the director may have learned everything he knew from watching bad Spanish soap operas…but it’s amusing and easy to enjoy in the same way that Evil Dead 2 is – you’re not quite sure if the camp is intentional, but it’s funny nonetheless. 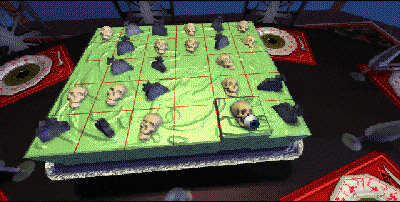 Graveyard cake - for when you want to make absolutely sure your intentions are clear.

Although none of our parents were particularly savvy about “age appropriate” games, in retrospect, The 7th Guest was definitely okay for us to have been playing as pre-teens. It’s easy to pick up and put down in short play periods and, even if it pales in comparison to some of today’s games in terms of graphical fidelity and slick interfaces. In addition, it’s a landmark game in the industry’s development with a spooky (but not terrifying) story with puzzles easy enough that you, as a well-educated grown-up, can figure out but challenging enough to make your kids think a little instead of just relying on fast-twitch muscle fibers to win (which has the added benefit of you not getting schooled in Marvel vs. Capcom 3…again). Between holiday travel and the long, hard winter I’m baselessly predicting we have ahead of us, introduce yourself to some video game history and give The 7th Guest a try – it’s $5.99 in the App Store for iPad, $2.99 for iOS and, if you get stuck, there’s a walkthrough for $0.99.