When the gates to Hell finally open and demon spawn invade the Earth, there will be two types of people: those that crap their trousers and hide and those that pick up the nearest shotgun and run headlong into battle. Despite how progressive/unique the idea of a game about fleeing for your life may be, The Haunted: Hells Reach is about the folks that eat nails for breakfast, screw MILFs and gladly take on the role of Earth’s last and most hardcore line of defense.

HHR has a story as old as time itself, almost as epic as the Lord of the Rings Trilogy with a hint of the timeless romance we all cried over in The Notebook. To put it simply, four dudes with combat qualities best described as a combination of Walker Texas Ranger and Rambo, wake up one morning and see that horrible monsters have begun to cause problems in their respective neighborhoods. These four dudes are not OK with this scenario and decide to give the aforementioned monsters a piece of their mind. 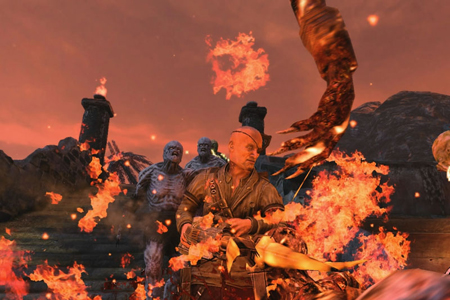 The story may seem a bit simple (or non-existent) but HHR is an arcade style wave based shooter, so it never really has to nor really needs to flesh out why hero A is shooting demon B, it just wants a player to start a game and start spilling the crimson. It’s not going to win any kind of contest for originality as the wave based structure feels very similar to other games, but if originality was a prerequisite for fun, then playing games would suck. One component that kind of helps the game stand apart from the other titles in this genre is a mode that allows players to play as the demons and fight the humans, but the bread and butter is definitely the 4 player co-op as playing as the demons just seems a bit tacked on. 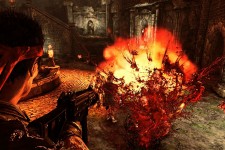 There's a demon somewhere in that goresplosion.

The game is played from the third person perspective your respective action hero has a surprising amount of speed and maneuverability which is one feature that helps The Haunted stand out among other wave based shooters. You can somersault out of harm’s way, leap from rooftop to rooftop and jump through boarded doors and windows to evade the numerous foes that stalk your every move. However, this is not a game about evasion so the offensive capabilities of your character have to be legit and you’ll be happy to know that they are the definition of brutal.

Apparently, there is also a shortage of bubble gum

You start out with a handgun, shotgun, submachine gun and knife, all of which can be upgraded through the game’s leveling system (involving a bar filling up when, you guessed it, you kill demons). All the different weapons handle well and there’s a real feeling of power as you begin to get a hold of the higher level armaments, especially in the knife’s class of melee weaponry (my personal favorite being the boomerang-like glaive that acts as the top-tier item in that class). You can also pick up explosives like dynamite and super weapons that include a freeze gun that turns enemies into icy statues ripe for shattering.

Ammo can be a bit scarce at times and the melee weapons are a pretty weak in the beginning. Fortunately for Earth, the four dudes tasked with saving everyone must have subscribed to Black Belt magazine before all Hell broke loose, thus empowering them with an 80’s action movie themed karate cornucopia. HHR would have been fine with just including the standard ability to pistol whip or strike opponents with the butt of your weapon, but the KTX Software thought that a roundhouse kick, somersault uppercut, and Johnny Cage-style flying jump kick would be more appropriate in the heroes combat repertoire. It may seem goofy, but when your health is low and the Apocalypse is a mere few moments away, it feels good to fall back on the moves that have guaranteed our existence since the first time a caveman landed a crane kick on an attacking wooly mammoth. On top of that, the hand to hand combat is actually useful and looks awesome especially when witnessing the attacks second-hand. These melee attacks can also stun enemies, leaving them vulnerable to head stomps and other attacks that seal the deal and make the ground both icky and sticky. 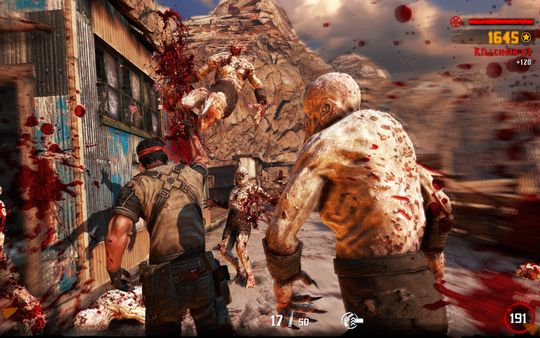 You know you're cool when a single punch lifts baddies off their feet.

HHR is a fun but often times chaotic game, which can be good and bad. While the action doesn’t stop very often, there are situations when the screen is either covered in blood or your character is on fire. All of that combined with the amount of enemies on-screen and things can get a bit confusing. Another chaos creator is the inclusion of destructible stones that have qualities like health restoration, co-op buddy resurrection and another that’s destruction prevents cataclysmic level events like thunderstorms and meteor showers from making an already difficult battle even more so. These stones appear at random places around each of the maps and require a player to quickly get to their location before an enemy demon gets a hold of them and runs off, which can be infuriating at times since they seem to get faster and tend to run headlong into larger groups of their mates (which, in all honesty, is a smart strategy on their part). The goal of each map, simply enough, is to kill a specific amount of demons, designated by a slowly draining bar in the upper right hand corner of your screen.

I don’t have too much to say about the sound really. Gunfire sounds like gunfire and explosions like explosions, which is good because explosions that sounded like dripping maple syrup wouldn’t make a whole lot of sense. I did like the sickly sound of enemies being dismembered and heads exploding though, so the sound effects guys either found some really solid vegetables to blow up or laws may have been broken. 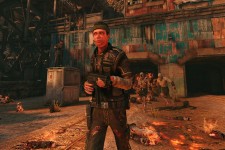 I would react to those sneaky demons, but I lack any sort of cosmetic emotional cues.

The Haunted: Hells Reach plays smoothly and looks good even if the player models and demons aren’t all that innovative or interesting. In fact, the comparison to Killing Floor is accurate in reference to the demons themselves as they look very similar to the mutants that overwhelmed England in that game (which happen to look a lot like the Doom demons that attacked Mars). Does this make the game bad? Not really, but for the franchise to take off and be more than just “that Gears of War/ Resident Evil 4 Mercenary ripoff with kung fu and the Killing Floor monsters” there needs to be a bit more amongst the cast of characters that inhabit the game.

That being said, the enemies are fun to dispatch and serve their main purpose of being mindless cannon fodder. There’s really nothing impressive about their AI, which is fine because HHR is a game about killing monsters, not negotiating with them or complimenting the many ways they can acrobatically avoid your attacks. The entry-level demons are eventually joined by demons that spit acid, demons with weapons and/or armor, really tall muscular demons and upon the final level of progression, demons that fly and shoot fireballs at you. Again, nothing new here but I’m OK with that.

It Kind of Matters if you’re black or white

Enemies also come in different shades of color, flesh toned being the weakest and the darker tinted enemies being pretty dang tough. Sometimes (and I’m not sure why, but I like it) the demons get really super pissed and their heads turn into glowing spiked balls, essentially turning them into explosive barrels which can be beneficial depending on your proximity to them when this occurs. Finishing all the waves results in a one way trip to Hell to face Abaddon, the ring leader of the invasion, a huge creature that stomps around in a lake of lava and shoots flames at you while his demon minions attack. Intense is an understatement. 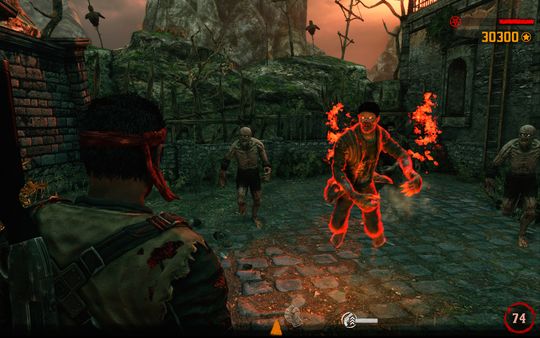 Glowing and red is never a good thing, shoot quickly.

The levels themselves are expansive and incredibly fun to move around in. As mentioned above, your character doesn’t move like a steroid filled tank, so getting from point A to point B is easy and quick (though some animation quirks can take you out of the moment). The developers did a nice job of creating areas that force constant movement while also being large enough to facilitate multiple players and hundreds of monsters. Since enemies appear out of thin air at times, there is never really a safe point on any map to catch your breath, but that’s why it’s so much fun. There are even a few cool environmental hazards that enemies can be kicked into, though knocking a demon off a high building or cliff is just as effective and looks awesome (especially if they are on fire or lacking a head). 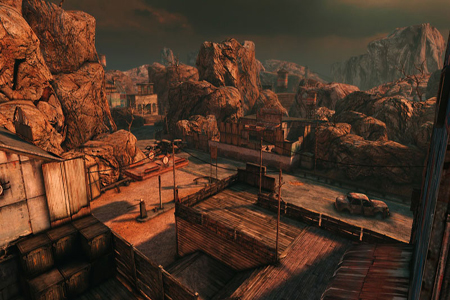 Ample space for fountains of blood and body parts.

There are a few issues with the game, one of which is not necessarily the developer’s problem as much as it was a result of the newness of the title in that finding an online game was a bit difficult. There weren’t a ton of options (especially in terms of people playing different game modes) and when I did find one I was forced to wait out the round (something that IS a development problem), which was frustrating since rounds could take 5 to 15 minutes depending on the success of those participating. Once I did get into a match with others, the game was considerably more entertaining so I hope that more exposure helps this problem.

The Haunted: Hells Reach has been on my radar since I heard about it winning the Make Something Unreal Contest and I can safely say that not only am I happy with the game, my expectations have been met and exceeded. This game is a great example of a developer sticking to a proven formula while adding enough to prevent the staleness that occurs with genre saturation and I look forward to what KTX Software has in store for the future. Go pick this game up now, I need some help making demonic fertilizer.