While I have somehow remained Con free for my entire existence (since I count PAX as an “Expo” just so that my point remains valid), BlizzCon has tempted me the most over the years. Coming off of the biggest expansion for World of Warcraft and with Diablo III seemingly revealed most of its pre-launch secrets at this point, I expected the 2011 edition of BlizzCon to be rather tame. Blizzard had other ideas and decided to put on a show that put fanboys and detractors on the attack for the near future. Let’s run down three major stories of the event: 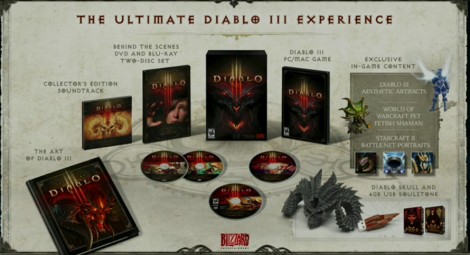 See I tricked you, this isn’t so much a Diablo 3 headline as it is a World of Warcraft announcement as Blizzard revealed details on their new World of Warcraft Annual pass. The pass is a 12 month WoW subscription paid in monthly installments which includes an exclusive mount and beta access into the next WoW expansion. One more small bonus. If you register for the pass and owned WoW before BlizzCon, you get Diablo III for free. Wow indeed.

On the Diablo III side of things, you can also hook up your WoW account with an additional 4 months free if you buy the Diablo III Collector’s edition. Blizzard is definitely taking care of its own here.

If you didn’t deduce from the title the long rumored new race, the Panderans will finally be joining WoW in its latest expansion. The expansion will feature this new faction-neutral race (read: both Horde and Alliance can play as Panderen), level cap increase to 90, a new Pannaria region inspired by Chinese mythology, a new Monk class, a pet battle system reminiscent of Pokemon and, of course, new dungeon and PvE scenarios.

The panda revelation seems to be the biggest point of contention, but this expansion seems to be a turning point in the WoW universe regardless of your feelings of the race. Blizzard is looking to reignite the Horde vs Alliance conflict in the story now that most of the original Warcraft III storylines have played out. Where we are going, only Blizzard knows. At least it treated us to another solid trailer:

Let me give you the “I haven’t played any of these games,” breakdown of Dotas and MOBA‘s: during the run of Warcraft III, the game’s community developed an add-on to the core game that focused even more on the heroes in that great strategy title and called it Defense of the Ancients (DOTA). It was incredibly popular; it spawned a genre of Multiplayer Online Battle Arena (MOBA) games that most recently has been dominated by League of Legends, among others. These games have hordes of followers and utilize an incredibly profitable free-to-play price model. Enter Valve (yes, the Half-Life guys), who started working with one of the creators of DOTA and in turn, quickly announces that they are working on Dota 2. The internet, fans and me were quite confused as Dota spawned from a Blizzard property and Blizzard was quiet. That was until this weekend where Blizzard announced: Blizzard Dota.

I am strangely excited for this announcement even though I have no interest in playing any games in the genre for an extended amount of time (because I’m terrible). The thing is, the MOBA genre is already defining new pricing models and competitive tournaments for the entire industry and now we have two juggernauts entering into the ring against a series of more-than-adequate upstarts. Not all of these games can survive and my money is on two survivors. Either Blizzard or Valve (not both) and one of the other current games (which the loser of Blizzard and Valve would be wise to support).

As for the game itself. I just watched the trailer and it has a nice sense of humor about itself, but yes, it looks like its name. A MOBA game featuring major characters from across Blizzard franchises. I can’t wait until the fight is on.

Sure there were other stories

We aren’t too far off from the next StarCraft II expansion and more multiplayer details were revealed. Diablo III also went hands-on for PvP impressions, but we’ve got plenty of time for those details once the games are released.