In my mind, the application of magnets tends to be limited. Whether sticking grocery lists to the fridge or lifting heavy metal objects via a crane, the idea of a magnet is about as exciting as watching golf and eating egg salad sandwiches. Upon finding out that I’d be utilizing a “magnet gun” during my playtime with Red Faction: Armageddon, I literally yawned and did my best to imagine the ultra boring metal themed puzzles I’d be faced with. I soon found out, however, that the science behind the magnet was tweaked just a bit to include the ability to stick anything to anything. Then, I got ambitious.

Magnets aren’t just about bringing things together in positive ways

When I began the game, I only had an assault rifle and a magical “fix everything” ray attached to my arm, both of which are pretty solid items but nothing to get overly erect about. The magnet gun itself was introduced in a pretty casual way, which is why I didn’t give it much attention in the beginning of the game. The grand scale of the magnet gun’s abilities were actually revealed to me quite by accident when I ran out of ammo and found myself cornered by the acrobatic bugs that had recently infested Mars. 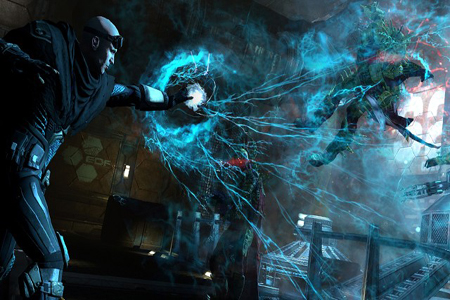 How mystical do you really need to be in space?

I figured I’d be dead soon as my sledgehammer wasn’t making the impact I had hoped, but then Bon Jovi’s “Living on Prayer” popped into my head and I realized that neither Tommy nor Jenna gave up during their hard times, so I wouldn’t either. Clicking over to the magnet gun (which I’ll call the maggun for the time being because shortening things is hip) I attached the first shot to one of the man-sized insects and scanned the perimeter for something to seal the deal. Being a bit panicked and a bit unsure of the weapon’s capabilities, I simply pointed it at a wall and found my foe hurtling at break neck speeds towards the stone surface, culminating with a loud impact splat and a shower of bug blood and body parts. Though the AI more than likely couldn’t process such creativity, I had the feeling the the rest of the deceased monster’s friends were thinking “oh s***.”

Soon I was flinging bugs at stuff as well as flinging stuff at bugs. My protagonist (some guy that’s the relative of some other guy that happened to be in the previous game) reacted in a relatively stoic way, but I was on cloud nine. Such a weapon would have limited applications in other games, but in Red Faction: Armageddon’s destructive environment, it took center stage, MVP and class president by simply being itself and (as previously mentioned) not feeling restricted by the scope of its magnetic abilities. 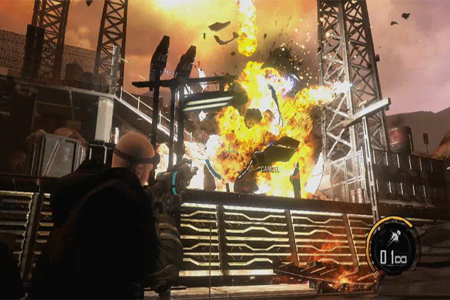 At one point in time I sent an explosive barrel careening towards a giant bug tentacle just because the tentacle looked at me wrong. The stupid monster insects just weren’t getting it; I was the George Washington Carver of magguns and my creativity would not be stifled. Sure, a simple shotgun shell or bevy of handgun rounds could have felled most of my opposition rather simply, but the glee of bringing a whole structure down on top of the disgusting varmints was so much sweeter. I mean, come on, these things had been killing off my buddies (well, casual acquaintances), simple bullet holes would not quell the vengeance that burned deep in my heart.

I can’t recommend picking this game up solely because of the awesomeness behind the maggun, that wouldn’t be very objective of me because clearly I have a place in my heart for the chaos it can cause. However, a game with additional and almost equally bad-ass components like mech combat and near limitless explosion opportunities is a game worth at least looking into. They say that when life hands you lemons you should make lemonade. For the rest of eternity, this should also be applied to magnets.