By the age of 24, I’d pretty much given up on video games. I was more interested in strengthening my DVD collection than owning the latest consoles and games. Plus, I didn’t have enough income to bolster both collections so ultimately, one had to suffer. That is…until I started working at a bar in Davis, CA. After every shift, a group of us would head over to one of two apartments, one conveniently located directly on top of the other. The games we would play would range from dominoes, 1-4-24 (a dice game), or Texas Hold ‘Em (which was rising in popularity at the time). There would also be times where we set up two Xboxes. One in the upstairs apartment and one in the downstairs. Then we would run an extremely long network cable to connect the two. It was the least nerdy LAN party for reasons I won’t get into because the statute of limitations has yet to expire. Nonetheless, it was great. 8 people. Two small ass TVs. Lots of alcohol. And plenty of Halo 2.

Always got stuck with the one on the right. Better players got the redesign.

On this one particular night, I was playing in the upstairs apartment. Now, I had stepped back from video games for a while and wasn’t very experienced with the Xbox. Needless to say, I was green when it came to the Halo series. Plus, I always seemed to get stuck with the Duke controller, which was unpleasant all around. I was bringing the team down, and they weren’t afraid to let me hear about it, either. Even in between matches we would go downstairs and rehash the previous round. Not only was my team bashing me for how much I sucked, the other team just laughed when I walked through the door. At this point, a person with lesser constitution than I would have probably given up to become just a spectator. But I knew that once I became more familiar with all things Xbox I would have my revenge.

In Malcom Gladwell’s book Outliers, “(he) repeatedly mentions the 10,000-Hour Rule, claiming that the key to success in any field is, to a large extent, a matter of practicing a specific task for a total of around 10,000 hours.” (Wikipedia) I knew that I’d probably never play Halo 2 for 10,000 hours, but my cumulative time spent playing other video games throughout my life might be close to that number. I had to just keep shooting. 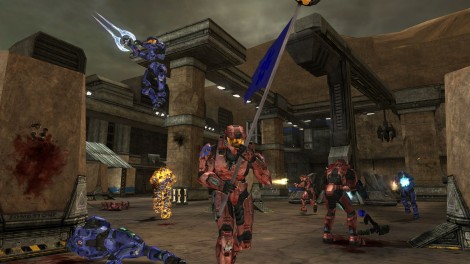 Nothing but absolute chaos.

After every few rounds, we would switch up the teams, especially if one was completely dominant. Not only did this make it more fair for all parties, it made playing for hours on end more fun. And we would always play until the sun came up. Which wasn’t that impressive when we didn’t get off work until 2:30 in the morning, but still. There were many times when I wouldn’t make it back to my house until 10:00 a.m. More often than not I would just crash at my friend’s house. Such is the life of bar employees. Being the weakest link, I was constantly having to climb the stairs between rounds. If one team was too dominant, I’d be put on that team to even the score. I wasn’t the only one switching teams, but it felt like I was the brunt of all the jokes. They were deserved. My Halo skills were a joke.

Yet, the night in question things were a little different. Instead of having a 5-15 kill/death ratio, it was a little closer to 10-10. Playing with people better than you is challenging, but your skills will undoubtedly improve. I had seen the improvement and was glad I was able to hold my own a little bit better. Learning the maps is key and the Halo maps now sat beside the Goldeneye levels in my brain. The last match of the night was drawing near, and I wasn’t the only thing about to make an impact. 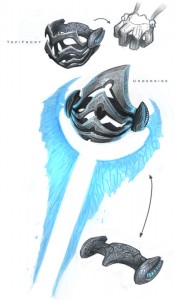 It was the final round. The birds were chirping and the sun was starting its move across the sky. One more kill and we would call it a night. I was on the downstairs team and it was tied. One more kill would sever the tie. I see an energy sword in the distance and make my move. Unbeknownst to me at the time, my upstairs opponent was also making a move for the purple double-bladed instant death machine. I arrived first and picked up the sword only to be blasted with the brute shot. I was barely alive. My shields were down and the alarm had sounded. The force of the shot had put me in the perfect distance to execute the energy sword lunge. I nailed it and the round was over.

Immediately, the sound of BULLSHIT being yelled filled our ears. Then a shatter of glass as an unopened tall boy sailed through the window of the apartment upstairs. Finally, the burst of carbonation as it escaped the damaged aluminum after hitting the paved parking lot below. A flood of beer poured out. A fallen soldier, a wasted life.

My friend was a competitor and had quite the temper when he lost. That beer that exploded in the parking lot was probably the only one that wasn’t consumed that night. Meanwhile, I was being congratulated downstairs after a hard fought victory. I earned my Halo 2 stripes that day. It wasn’t long after that video games came roaring back into my life.

Soon after, we quit playing Halo. I was introduced to Burnout and had to get an Xbox. My break from video games was brief but if it wasn’t for those long, late night Halo 2 sessions I don’t know if I would have ever been brought back.