So you’re one of the select few that have been chosen to survive whatever apocalyptic situation is set to befall the Earth. Wow, congratulations, forgive me for not jumping for joy as I make peace with my own mortality. Despite my urge to strangle you, cut off your face and wear it in hopes of taking your spot on whatever ship/bunker/boat that’s going to guarantee your safety, I’ll go ahead and secure my place in the afterlife by sharing with you the knowledge I’ve compiled from my time with a game mirroring this exact scenario. Rage may have been a slight bit underwhelming, but I’ll be damned if I didn’t learn some solid lessons from my time with that game and am oh so happy to pass it on before I’m crushed, burnt, vaporized or slowly starve to death in an asteroid fueled ice age. 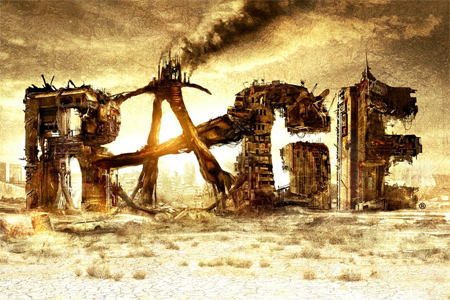 The Lessons of Rage

If you survived, others probably did, too 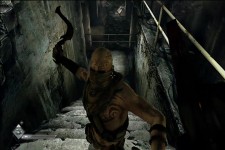 I learned something today. You may be one of the chosen few, but that doesn’t mean that those deemed unworthy of continuing the species haven’t figured out a way to stick around. While you may think that your awakening from stasis will make you some type of apocalypse celebrity, keep in mind that those that have suffered through years of barely scraping by might view you as kind of a prick or worse yet, food. To avoid an anticlimactic arrival back to Earth, do your best to spread the love and help those that are less fortunate. Scratch their back and they’ll scratch yours, or at least act like they are while quietly plotting your death. On a side note, inbreeding and mutation are always issues in these type of scenarios so interpret any roars or pouncing as a signal that that particular individual is not currently in need of your services. Thanks, Rage.

A well rounded skill set should include stabbing, shooting, driving, and building robots

I learned something today. Your reintroduction to Earth isn’t going to be easy so you need to be prepared to fight, but simply being able to wield a gun or knife in an offensive capacity isn’t going to cut it on Earth 2.0 (or -2.0 depending on whether you’re an optimist/pessimist). You’ll need to be able to get around fast through the use of dune buggies cobbled together from trash and these buggies will definitely need some sweet guns because other dune buggy drivers may not be too keen on your arrival. A good start is by watching the film The Fast and the Furious right before cryo-sleep. That way your mind continuously processes the film throughout the time you’re out of commission and engrains the well choreographed driving sequences into the instinctual sectors of your brain. Now when you wake up, it will be as if you’ve been training for bodacious buggy battles for 100 years, which should give you an advantage over the dudes that have been merely applying a more amateurish set of driving skills on a daily basis. Thanks, Rage.

I learned something today. You may assume that survivors will be draped in old rags, animal pelts and anything else they can scrap together in order to protect their flesh from the elements of an Earth gone mad. This isn’t the case however, especially for the women that will be welcoming you into their shanty towns and underground hide-a-ways. Apparently skin is in when it comes to clothing for the opposite sex, so expect exposed midriffs, tight pants and booby exposing tube tops. It may not be the best protection for them when it comes to radiation, mutants or paint sniffing sociopaths, but at least you know you’ll have some eye candy to keep your spirits high. Sorry ladies, but should you be members of the chosen cryo-survivors, you’ll need to make sure you stash away plenty of baby tees and daisy dukes, it doesn’t appear any exceptions are made with the dress code(unless you’re old). Thanks Rage. 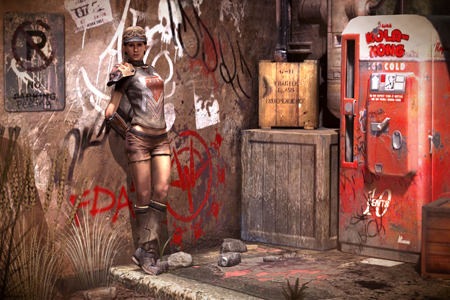 Who wears short shorts? Pretty much everyone.

Survivors have no patience for conversation 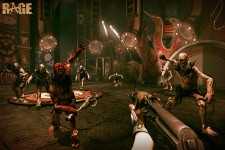 Friends or foes? If you have to ask, you're already dead.

I learned something today. As mentioned before, there may be other living things sharing the wasteland with you. While some apocalypse themed games may have taught you that not every situation requires violence, the fact of the matter is you’ll have to kill at least 98% of the people, mutants and animals that you run across while exploring the shattered remains of civilization. While communication skills are important, you’ll know within a few seconds whose on your side and those that aren’t need to be put down without any sort of attempt at a mutual understanding of each other’s feelings. Frankly, while this makes life a bit more dangerous and considerably more gruesome, you won’t have to waste your time trying to rifle through solutions for the many confrontations you’ll be faced with. The future holds two simple choices: kill or accept the side quest. Thanks, Rage.

On the surface, it looks like things in the future are pretty, well superficial but less thinking means more energy for tasks like shotgun themed face removal, stunt driving and private part fondling. You may not survive very long after you step out of your survival cocoon, but at least the time you do have will be pretty darn exciting. Thanks, video games.