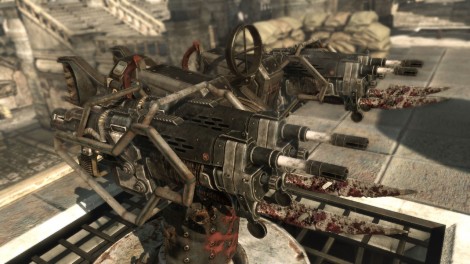 Just because somethin is awesome does not mean you can't add additional awesome, more awesome is always straight up awesome.

The first DLC pack for Gears of War 3 has been detailed, and it looks like fans of Horde 2.0 are getting the brunt of Epic’s first dose of loving. The pack contains a robust sampling of content, including 3 new maps, new weapon and character skins (featuring an overall clad Dizzy, love that guy) and new fortifications for Horde 2.0.  While the skins and maps are never a bad thing, the additional items for Horde 2.0 look to significantly alter aspects of that mode by allowing players to call in assistance from mortars, snipers and the pants soiling Hammer of Dawn. The other additions included are a decoy upgrade that produces an Onyx guard bot, an upgrade that adds fire bolts to the sentry and an upgrade for the Silverback that gives the beefy mech rockets and cuts down on repair costs. I was a bit disappointed that there wasn’t an upgrade for Tickle Fences, but the games only been out for a couple of weeks so there’s plenty of time for the power of uncomfortable laughter to be released on the Locust/Lambent hordes.

I absolutely love the changes Epic made to Horde mode and imagine that with full support, it will only get better. This DLC seems spot on in terms of price as well (uncommon nowadays), which goes to go show that Epic really respects its fan base and sees us as more than just dollar signs.