I never really suspected my mom of mental illness but I guess anyone can go a little nutty when they spend their days watching Christian zealots validate their hate through God’s wrath. I always thought the Bible was about helping people and being a solid person, so when mom started hearing the voice of God, I figured it would turn out pretty well for everyone. Boy was I wrong. After a couple of days of dialogue with the omnipresent being she took a turn and tried to murder me with a knife, which is where my horrifying story begins. Fortunately for those of you playing the game based on my misadventure, titled The Binding of Isaac, it equates to a pretty fun experience, despite the life long trauma I‘ll be forced to deal with. Oh well, that’s what psychotherapy and mind-altering prescription medication is for.

Jerry Springer Eat Your Heart Out

While avoiding my mom, I happened upon a trap door that led me into our basement. I didn’t realize our modest ranch style home even had a basement, let alone one filled with all kinds of strange and frightening monsters intent on assisting my mother with ending my life and accomplishing God’s supposed directives. Most of these things looked like they could have once been human and a few bore a strikingly resemblance to me, which leads me to believe that I may not have been an only child. Some shot flies out of their mouths, others bum rushed me and there were even a few that exploded when I killed them, making it very important for me to learn their patterns and abilities. At the end of the day, my only goal was survival and these freaks were standing in my way (at the time I didn’t know it, but this slow disintegration of my emotions would end up aiding me down the line when I had to physically assault the other kids at the orphanage during my stint there). 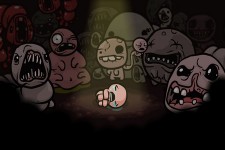 These things were very good at bumping in the night

Most kids would have just sat around and cried in a similar situation, but not me – my still forming brain had yet to fully comprehend what was happening and thus I jumped headfirst into the dark and dingy horrors that stood in front of me. The only problem was that I was unarmed, but fortunately my situation correlated to a never ending flow of tears (okay, so I did cry. A bit.), tears that happened to injure the creatures that lurked in the depths of my home. Still, I wasn’t strong enough to travel very far so I needed to find a way to beef up my offensive and defensive capabilities and find them I did. The trinkets I came across led to either a boost in my stats (speed, tear strength, health, etc) or acted as special attacks that recharged as I moved from room to room. Some items even changed the form of my tears, allowing me to shoot homing tears or charge them up for a powerful attack. I needed to get past the fact that these items were often times pretty gross and weren’t exactly the type of weapons that heroes willingly wielded in other games (like the fetuses that acted as wingmen or the severed cat’s head that gave me the ability to shoot a massive ring of tears at my enemies). I’d take what I could get, a trait that followed me into my adult life and a string of years bouncing around between homeless shelters.

You think Your Basement is Scary

Navigating around the depths below my home was relatively easy, similar in the way that dungeons in Zelda worked (I used to love playing that game until mom blamed it for corrupting my soul). Each section had a treasure room where I could find power-ups, a shop where I could spend the money I found onitems and a boss room that featured some of the larger, more dangerous inhabitants of my basement. There were also other rooms sprinkled around each map, like an arcade where I could gamble money for items and secret rooms that could only be opened up with the bombs I had in my possession (I did remember to pack those before I escaped, mom wasn’t able to trash everything in my bedroom). Most the rooms were filled with monsters and locked behind me as I walked inside, but clearing them of their occupants opened the doors back up and allowed me to continue on my journey. As I traveled further below into the maze that was my was basement, the rooms multiplied and the monsters came in different more, powerful variants, which meant I needed to make sure I collected as much gear as I could before moving on. 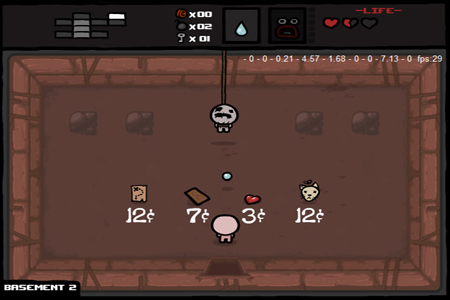 Not everyone in the basement was out to get me, this dead guy actually sold me some great stuff!

Now, if you thought insect spewing children and sickly blobs were bad, just wait till you see some of the bosses that guarded the entrances to the next levels. If I wasn’t already positive that my mental state was already in decline after what happened with my mom, these guys would surely contribute in significant ways. Fortunately for me, they had patterns they stuck too, but that didn’t mean I didn’t have to stay on my toes throughout the battles. Special moves came in handy but at times these fights ended up being wars of attrition. The other enemies were pretty sick and the memory of them will ruin my dinner for the rest of eternity, despite the fact that they had a cute way of going about it. One guy in particular vomited blood pellets at me while what appeared to be ulcers sprayed a steady stream of gore if I got too close, though he kept a smile on his face the whole time, which was a bit unsettling to say the least (I guess it goes without saying by now). 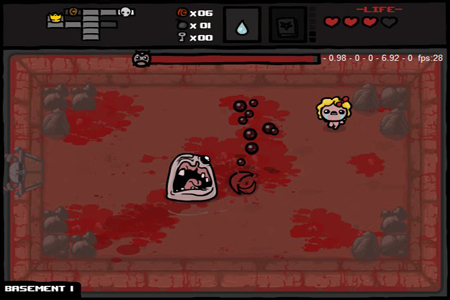 I felt that an unseen force was manipulating my adventure the whole time I was down there, which was both beneficial and infuriating at the same time. When I struggled, I felt like better items and easier enemies appeared, but every time I felt like I was on a roll, things would get difficult. Whenever I failed and had to start over from the beginning (extra lives and continues aren’t real you know) it wasn’t as big of a deal because I learned more from my previous experience and better items were available based on certain conditions I had met. Despite running into some frustrating sections, I felt compelled to keep on trying. I mean, it’s that or evisceration at the hands of the woman that birthed me (and seeing as she was in possession of crazy eyes, she’d probably do something pretty weird to my corpse).

Edmund McMillen and Florian Himsl (of Super Meat Boy fame) did a fantastic job of depicting my journey, with the icing on the cake being a phenomenal soundtrack but Danny Baranowsky (also of SMB fame). If I had a walkman with his tunes on it while I was down there fighting for my life it would have been a much easier experience…but that‘s besides the point. Those guys all have a sense of style that’s missed in many modern games and I’m pleased that they told my tale as opposed to EA (I saw what they did with good ole’ Dante’s struggle, might as well have been developed by the love child of Michael Bay and Clive Barker). 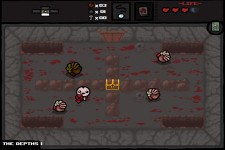 Yes, that's the product of an abortion aiding me in battle, Pro Choice is the way to go!

It’s been awhile since I was confronted by the most horrible experience a child could ever be exposed to and I’m glad that someone can get an evening of fun out of my tragic tale. I’ve played it and feel like it’s one of the best indie games out right now. Don’t worry, you shouldn’t feel guilty at all about being so entertained by my sick journey, I’m doing just fine. I mean, this asylum isn’t permanent or anything, just a place to lay my head while I try to organize my thoughts and work through why I feel inclined to murder middle aged women and wear their skin as clothing.