One thing that took me by surprise at PAX was the sheer volume of people constantly moving in my field of vision – my eyes literally got tired and my sense of equilibrium felt a little off, so it was nice to find respites from the visual onslaught. While perusing the games on the Indie floor, Coop and I noticed a small crowd of people perched on the edge of a couch, cheering like they were playing Mario Kart. We wandered over and started trying to figure out what in the heck was going on. Observing was only marginally helpful since what we saw were birds flying through tunnels and into the sky, racing after one another with one of them trailing what looked like a censer. I was baffled, but we were quickly invited to join in after a round of the game ended. Gratefully taking our seats, we were tasked with picking our character: one of four…well, they looked an awful lot like origami birds. I shrugged, selected the crane, and got into the game. 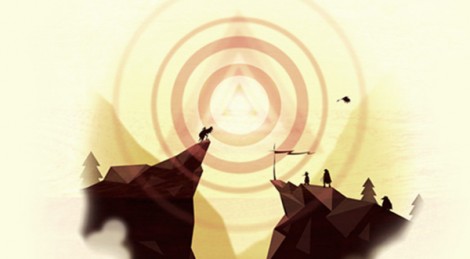 The gameplay of Chasing Aurora is deceptively simple – use the left analog stick to control your bird and one of the triggers to tuck your wings and dive. The point of the multiplayer match that we got to try out on the early build demo is to pick up The Item (which is what I’m going to call it) and keep it for as long as possible in a highly entertaining version of Capture the Flag. The trick is that the other three players are flying after you in an attempt to take it from you; all they need to do is come inbetween you and The Item and they steal it. Although the game didn’t have any items or power-ups, it was loads of fun flying through the tunnels, flying high into the air and diving in an attempt to keep The Item while watching the wind currents (shown by blinking-but-unobtrusive arrows) to plan your best route to stay ahead of your competition. It’s not all sweetness and light, though, as you can light The Item on fire by dragging it through a flaming signal fire at the top of the map and use it as a weapon to reduce the other players to ash. On top of that, if you fall too far behind (off-screen), you die and have to wait for a respawn.

After my round was over, I got to talk to the developers at Broken Rules who are based out of Vienna, Austria and are known for And Yet It Moves (part of the Humble Indie Bundle 3). Despite the fact that what we got to play was a four-player race, the eventual goal is for Chasing Aurora to be much more heavily focused on a single player campaign and for the four birds to have different attributes and abilities to go along with the unique art style and play mechanics.

Coop: While I didn’t actually get a chance to play Chasing Aurora, I have to admit that it was extremely entertaining to watch. It was simple concept executed really well, with a unique origami style artwork that definitely made it stand out. The 4-player battle mode style seemed very addictive, and made it a perfect game for playing in groups. I only hope the game actually feels as smooth as it looks. After talking with one of the developers, the plan is for Chasing Aurora to be the first installment of a trilogy. Many decisions on what the story mode will involve are still being worked out. In my opinion, showcasing the multiplayer mode was a great move because it got 4 people in front of a great game all at once. I’m definitely looking forward to seeing more on this title.

No release date has been set, but it’s expected in Q1 of 2012 for Windows, Mac and Linux and, if it follows And Yet It Moves, the Wii. Check out the Broken Rules blog here and a gameplay video captured by another PAX goer: