So let’s get the obvious points out of the way first. As expected, Gears of War 3 still looks amazing, plays well and sounds incredible. The real question is whether there is enough in this package to end the series on a high note or will it join the others that have suffered the fate of the thirds? Fortunately for fans and newcomers alike, I can confidently state that in a year full of threequels, Gears 3 has set the bar pretty damn high.

On The Ropes But Still In The Fight 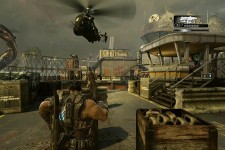 Aww man, I was starting to like this boat

Things don’t look great for mankind as Gears 3 opens up. Its greatest stronghold, Jacinto, has been sacrificed to mute the Locust threat only to make way for the horrific Lambent and their volatile body composition. Fortunately for gamers, this doesn’t depress the cast of Gears of War 3 as much as it validates their departure on a balls-to-the-wall action adventure that will leave your heart racing harder than it did the first time a naked member of the opposite sex approached you for a hump session.

Some may say that Gears 3 lacks narrative depth, but that’s like saying that the character development in Die Hard was lacking. If you’re looking to get spellbound, go read a Harry Potter book because this game wants to make you produce adrenaline to the point that it leaks from your eyeballs AND your butthole (seek medical attention if this happens, that’s what the pause button is for). While Gears 3 does a great job tying up loose ends and shining a bit of light on a few character back-stories, it knows its role and shuts its mouth when it comes to the story elements that other games try way too hard to produce. In the end, I don’t need to know the reasoning behind piloting a blimp monster through a place called “The Dead Lands” if it equates to further gore explosions. I’m a simple man with simple tastes. 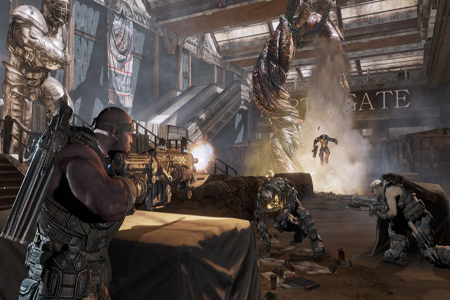 If there is anything negative to say about the campaign, it’s that it kind of blows its load during the first half. That’s not to say that the conclusion is disappointing, but the chaos of the game’s beginning doesn’t seem to persist throughout and a few scenes (such as a rather boring submarine ride) kill the pacing completely. Still, this is a slight issue and there are more than enough jaw-dropping scenarios scattered throughout to keep this problem relegated to nitpicky review point status (my mouth can’t be too full of Bleszinski penis).

The sheer number of enemy types is pretty amazing, as there always seems to be a new and interesting creature around every corner. While the Locust make a return to the game, their mutated cousins, the Lambent, steal the show. Essentially Locust who have succumbed to the “immulsion” flowing throughout the planet of Sera, these creatures come in a variety of shapes and sizes and have the added benefit of exploding upon death or mutating into more powerful versions. It all adds up to making you think twice about sticking to the strategy that proved effective against the Locust. I was afraid that the prominent role of the Lambent would change the way the game felt, but instead they helped keep things fresh and helped avoid the monotony of the cover, shoot, repeat mechanic. In terms of the epic boss battles the Gears series is known for, let’s just say “Giant Monster Boner” is a term that will catch on as a result of this game. 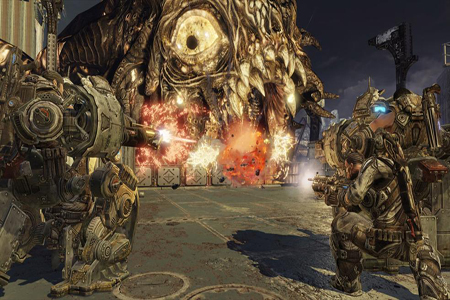 I spy with my little eye something that starts with "m"

There’s An App For That

All of these enemies might seem intimidating, but the COG have a few tricks up their sleeves to even the odds, the highlight being the ability to play through the campaign with four buddies. I highly recommend playing with at least one other person; even though the game is still great solo, it’s much more satisfying to tag team the horrors that stand between you and the survival of the human race. The computer AI does a good job of taking over the characters not controlled by other players, but they act more like field medics than component marksman (I relied heavily on the AI to resurrect me when I went down). To facilitate the co-op, a few new faces have been added to the Gears team, but none of them stand out all that much other than the Aussie accented Sam whose brash sarcasm competes with Baird’s throughout the game.

New weapons and gadgets have been included as well, such as a classic take on the Lancer (equipped with a bayonet for skewering baddies), a digger gun that fires grenades that burrow under the ground, and the “Silverback” which is a mech suit that functions like a mobile turret and does not disappoint in its ability to reduce enemies to spreadable paste. Another notable addition is the incendiary grenade, which is quite effective against huddled crowds and seeing dug-in enemies covered in liquid napalm is inspiring in a sick sort of way. New armored enemies with a weakness to flames and explosions seem to have been added to present both a challenge and excuse to wield the new gear, but the chainsaw-equipped Lancer is still the go to weapon in most situations.

Go Grab Your Friends and Then Kill Them

While the appeal of the campaign has been furthered increased with the inclusion of 4 player cooperative play, the multiplayer is the money maker in this series and I’m happy to report that there’s no disappointment here in that regard. Classic player versus player multiplayer is still as fun as before and features familiar modes like King of the Hill, Capture the Leader, Annex and Classic Deathmatch. I struggled with matchmaking at times and often got lumped with much higher level players, but I also got into the game a bit later and I can’t fault Epic for me sucking. Player progression works similarly to how it did in past games, with character skins and other unlocks being the focus above new weapons and perks. A cool addition to this formula is that player progression comes out of playing all modes in the game, not just player vs player, so those that stick to campaign play will at least be able to see their levels increasing, albeit slowly, over time. 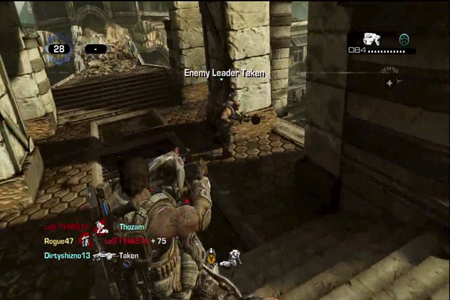 Just stay calm bro, I'm just going to shoot this pistol right next to your face

While not a new addition to the series, Horde mode has been upgraded to Horde 2.0 and includes some features that make it quite different from its predecessor. While fighting waves of monsters is still the point of the mode, you earn money as you go which can be used to buy new weapons, ammo or for purchasing upgrades in the newly implemented base-building mechanic. Before the round begins, you’re asked to choose a placement for your base and from there can add/ upgrade things like barb wired fences, turrets and decoys (which happen to start out as cardboard cut-outs of the Cole train). The placement of these items is predetermined, which is kind of disappointing, but is more than likely in place to prevent game-breaking events from occurring. These items are not available from the beginning, however and correspond with player progression throughout games of Horde 2.0, so newbies have to deal with only having access to barbwire while higher level players can produce electric fences and laser turrets. 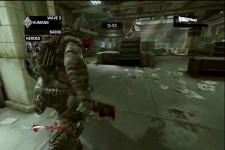 Finally, I get to do the cleaving!

Those not content with furthering the plight of their own species will be happy to know that the Locust get their own take on Horde 2.0 with Beast Mode. Beast Mode tasks you with eliminating the human opposition in a limited amount of time, with the destruction of emplacements and human enemies adding seconds to the clock. Money is earned in a similar way to Horde 2.0, but instead of buying weapons and defenses you’re purchasing different units of the Locust army, including everything from exploding Tickers and basic grunts to Corpsers and the insanely angry Berserker. It goes without saying that while this game is pretty straight forward, it’s one of my favorite additions to Gears 3.

As if the incredible amount of content in this game wasn’t enough, Epic went out of its way to wrap up this gift to gamers everywhere by including one of the deepest stat tracking systems I have ever seen in a game. It literally tracks everything, from multiplayer victories to the number of each specific enemy type you killed throughout the campaign. Curious as to what your buddy’s’ favorite Beast Mode monster is? It tracks that too. The only thing it didn’t track was how often I stopped to take a leak, but I’m sure the DLC will look to rectify that. In a world where people love to see how awesome or crappy they and their peers are, Gears of War 3 reigns supreme in the world of video games.

Anyone wanting to diversify their gaming this holiday season should probably not buy Gears of War 3 because it’s going to be all you play till 2014. At a time where multiplayer and single player components of most games often weaken their overall package, Gears of War 3 sets a gold standard for content that might never be matched. Cliffy B may rub some people the wrong way, but he knows exactly what his fans and gamers want and has developed a gem that is hands down the “Multiplayer Game of the Year,” at the least. Everyone else, take note: this is the new standard for awesome.