Things are looking extremely grim in the Resistance universe. An alien threat has all but completely taken over and there is one man left with the firepower and determination to turn the tide. With an ever-growing pyramid of first-person shooters constantly being released, it takes a lot to stand above the rest of the crowd these days and where the crown rests for the PlayStation 3’s top original shooter is, generally speaking, up for debate. Is Resistance 3 the medicine trigger-happy PS3 owners have been waiting for this year? 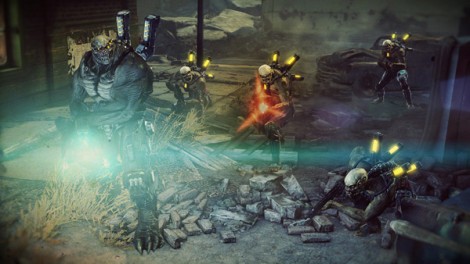 These Chimera are the newest, most lethal break-dancing team in the USA.

With the alien Chimera forces steamrolling across the planet during an alternate version of the 1950s, human strongholds have become few and far-between. These remaining societies fight to survive, most granted an immunity to the Chimera virus through the actions of past protagonist Nathan Hale. Resistance 3 puts the player in the shoes of one Joseph Capelli, a former soldier settled in the Midwest. The weight of the world gets thrust upon his shoulders as Dr. Malikov, who has dedicated his time to stopping the Chimera, begs him to make a journey to New York to destroy an important tower that is central to the aliens terraforming and freezing the planet. It certainly gives Insomniac Games a reason to play around with the idea of having set pieces in familiar territory along the way, such as having the Gateway Arch visible in the background as Joe and Malikov do business in St. Louis, Missouri. Otherwise, the story avoids much in the way of interesting plot twists and revelations and is more or less an entertaining ride from A to B full of conflict and destruction. Unfortunately, the conclusion is on the flat side. However, the last few playable minutes are so intense that the disappointment afterward initially has little effect on the overall experience.

Insomniac Games has been on quite a roll with games centered around aliens and evolving weapon technology, notably starting with their Ratchet and Clank series. Resistance 3 is no different, but that does not make it any less satisfying. The first-person gun-play found here is often loud, frantic and intense thanks in part to the unrelenting Chimera intelligence and a return to non-regenerating player health. Many of the smaller Chimera forces will take cover and advance around the battlefields to get to Joe’s position. However, the larger enemies will attempt to steamroll Joe from first sight. Encounters with the large ape-like Brutes are especially daunting as it charges constantly and can knock Joe to the ground momentarily. A good deal of time can be spent scouring the environment for health packs and ammo just to survive. These situations can easily straddle the line between being empowering when beating the odds and frustrating when forced to repeat a given scenario multiple times. The majority of gameplay consists of fighting these intimate battles that play out similarly and, by adventure’s end, fatigue with them can easily set in. If you’ve shot one charging Grim in the face, you’ve shot them all.

Sucks to be this guy.

Resistance 3 is not all about these skirmish moments, however, with more defensive vehicular sections that place Joe in charge of protecting a boat and train from attackers and another brief nighttime trek through alien sniper territory. In the end, the adventure is mostly about using ranged weapons to put down foes, made even more enjoyable due to an upgrade system that encourages experimentation with every weapon to conquer any given situation. The human and alien guns do not necessarily get magically stronger with repeated use, but instead become more capable. Secondary features unlock such as the ability to place a stronger version of the Marksman rifle’s turret that fires faster and lasts longer or the Deadeye sniper rifle highlighting the heads of enemies for assistance scoring that oh-so-satisfying head shot. Needless to say, curiosity can be greatly rewarded and much enjoyment comes out of seeing how the next weapon modification can lead Joe to victory.

There is a real believability to combat and weaponry in Resistance 3. A difference is easily felt between handling the light Bullseye rifle and locking onto enemies with the Wildfire rocket launcher. At default setting, Resistance 3 does not stray far from the shooter pack when it comes to control input. Clicking the left stick starts an unlimited sprint, holding L1 aims and R1 fires. Grenades are lobbed at reasonable distances and melee provides feedback when it lands. Jumping brings a real awkwardness to movement, on the other hand, but it might be a stretch to imagine a man leaping several feet forward to remain a crack-shot with any rifle. A small nitpick would be that using ladders feels stilted compared to other movement, but climbing events are few and far-between. With many PlayStation 3 game releases embracing the Move controller, Resistance 3 appears to be the first marketed as making use of a new sharpshooter peripheral that is similar to holding a rifle. No remarks can be made here about how that handles as I am not an owner of any Move equipment, but the choice is available. 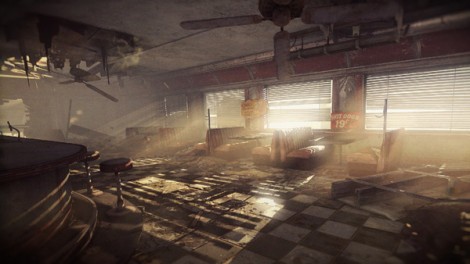 This place has seen better days... and hot dogs were really cheap.

The visuals across alien-torn America are often a bleak and dreary affair, displaying mostly dusty browns, grays and whites. While that might have become more of a criticism for games these days, it mostly works with the tone here. Alien colors stand out almost awkwardly with oranges, yellows and blues as if they do not belong on the planet for the first two acts. The environment becomes a lot darker and slightly disorienting toward the end, but the mood produced keeps it from becoming a totally taxing affair. Animations are usually clean and fluid and, aside from the polished look of the alien weapons being wielded, the textures keep with the dirt and grime of the situation. While the graphics won’t be sitting high on the list of games that make eyes melt, they should at least be appreciated for upholding the hopelessness that the humans feel as they watch their homes and families slip away to the will of alien forces.

An explosion orchestra from outer space

The voice work and soundtrack is pretty standard fare. Joe is a determined man and, while he does not talk during gameplay, he has a few lines that help define his character as a believable person. A speech given into a radio during the third act hits home and really allows you to root for him to succeed and reunite with his family. The true highlight of the auditory experience, though, are the battles. Guns are loud, explosions even louder and alien weaponry emits the expected-yet-powerful sci-fi noise set of crackles and sparks. Taking down enemies is as clear as day with Chimera letting out a death shout when they fall. It’s a real treat to the ears. 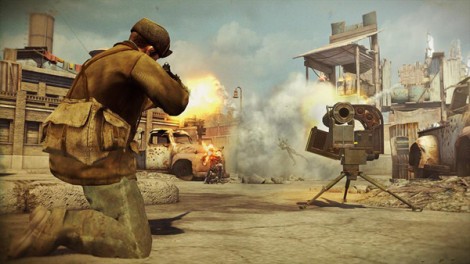 1950s men only got on one knee to propose or shoot aliens.

Going a step in the Call of Duty direction, Resistance 3 brings leveling up, regenerating health, killstreaks and perks into its online ring. Playing in typical deathmatch and objective modes, players can expect to rank up, unlock new personal touches and gain skill points that can be used to gain and upgrade weapons and perks, such as holograms and the ability to give your opponents the finger. Objective modes featured here are the shooter staple Capture the Flag, Chain Reaction, where teams fight to hold all the control points on the map and Breach where one team fights to defend nodes from attackers with a limited amount of respawns. While there’s no guarantee that every single one of these modes will hold interest as the months go by, it’s certainly a fun and varied way to keep getting a healthy dose of Resistance after the campaign is said and done. For fans of less competitive play, the main campaign can be played online and offline with a friend. Resistance 3 requires an online pass, a system that requires players to redeem a purchasable code to access online content such as multiplayer. Whether or not this proves bothersome is a matter of personal preference., but let me just say that any game that makes me manually enter codes to play included game modes gets a big frowny-face from me.

This is our planet

The Resistance series may have found some real strengths with its third major entry. The gameplay here is very solid. Fighting Chimera during its near 10-hour campaign remains mostly fun with weapon upgrades and battlefield situations. Co-op and competitive features can keep the battles raging for weeks or months, depending on dedication and ownership of a pass. While the story follows a simple path from explosive start to lackluster ending, it manages to provide some engaging set pieces in-between. While the journey to New York can get rocky sometimes, Resistance 3 has enough going for it to make the planet worth fighting for.

2 Comments → Resistance 3 Review: How I Learned to Send E.T. Home in a Box