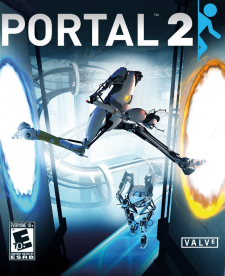 When I first heard about the Portal franchise I didn’t quite understand it. I did not play PC games and didn’t really follow that side of the industry. When it was released as part of the Orange Box for the Xbox 360, I dismissed it again. It wasn’t until Portal 2 was coming out that I thought I should probably play the first one to see what all the hubbub was about. Portal lived up to the hype, but it didn’t adequately prepare me for what was about to come.

Black Mesa can eat my bankrupt…

Now that I have finished Portal 2, I can (without playing any of the games that are still coming out) say that it is my game of the year. Never has there been a game that I’ve enjoyed more thoroughly than Portal 2, and that’s having only played the single player portion of the game. You might argue and say that my statement is outlandish since I haven’t finished the “whole” game but the single player campaign is that damn good. How I feel about Portal 2 is like one of those movie advertisements that say “you’ll laugh, you’ll cry on a roller coaster of emotions while simultaneously being a thrill ride. Scary.” That’s not to say I cried during Portal 2, but that’s only because I’m a man, and only pussies cry (sorry the Ethan side of my brain took over for a sec). But I rarely laugh aloud when playing a game. I can appreciate the humor in games but Portal 2 is the only game that I can remember laughing so loud that it gained my wife’s interest from the other room.

With that being said, the credit has to be given to the writing. To say it is outstanding would be to undersell it. Sometimes story gets in the way of a game, Portal 2‘s story never interferes with what the objective of the game is. If you could remove the story portion of Portal 2 and just focused on the physics based gameplay of solving each puzzle room, it would still be a pretty great game. Never mind the fact that Portal 2 is has just the right amount of characters for its story. Not counting Chell, the character you embody, there are 5: GLaDOS, Wheatley, Cave Johnson, the turrets, and the companion cube. That’s it. 5 characters. 3 of which are basically robots, 1 is a pre-recorded voice of a dead man, and 1 is a cube. Only the brilliant minds at Valve could create a character out of an inanimate object. If that doesn’t deserve game of the year rewards heaped upon them, I don’t know what does. 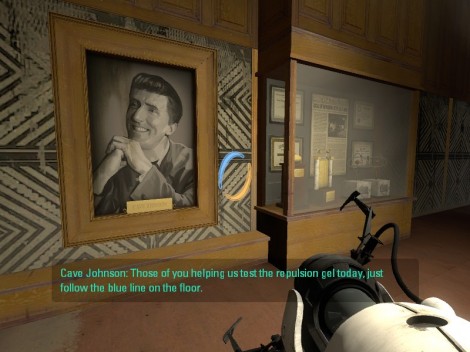 Throwing Science at the Walls

I mentioned that Portal 2 would still be a great game if the story and characters were removed. Play the game on mute, then come back and agree with me. The challenge of the puzzles combined with the unique additions to the already remarkable portal gun makes it more than a worthy successor to a great first game. While the puzzles are indeed challenging they aren’t the “throw your controller at the wall and break it into a thousand little pieces that your cat might step on and hurt its poor little paw full of claws that is fucking up your furniture” type of challenge. Yet it is hard enough to give you that satisfying feeling of accomplishment after completing each room, no matter the insults GLaDOS or Wheatley might be hurling your way.

With the additions of the colored gels, hard light bridges, and excursion funnels, Portal 2 successfully adds elements that completely work in the Aperture Science created laboratory. Valve has created this world where they feel completely free to add the wackiest stuff without having it be unrealistic within the universe. Some sequels try to add things that wouldn’t make sense within the game but in a world where science (especially make-believe science) is king, anything can happen. 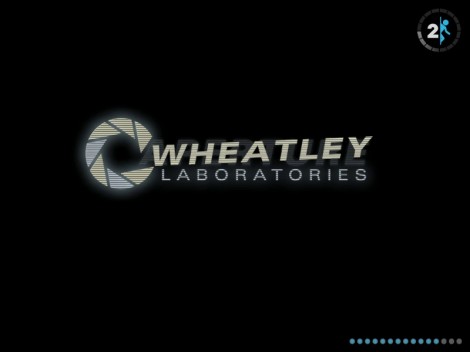 Another thing that makes Portal 2 great is the fact that no two people are going to play through the game the same way. This can be said for a lot of open world games, but not too many puzzle games. Usually there is a solution and one way to get to it. In Portal 2, there are many ways to get to the solution. Often times when new toys were introduced, I would forget that I had the most powerful tool on the planet in my grasp and get stuck in a room. It wasn’t until I remembered that I had the portal gun that I could solve the room, hit myself in the head for being an idiot, and move on to the next. But not before being chided by my robotic overlord.

Frankly, you ought to be paying us

I have never played such a satisfying game from beginning to end. There were absolutely no dull points. The puzzles were challenging but not frustratingly so and solving them was gratifying. I haven’t gotten the chance to go through the co-op portion of the game but I’m sure it will be just as great. So long as I get a friend to be my partner and not some bum I paid $60 off the street to come be a “test subject.” It immediately jumped into my top 5 all-time favorite games and I can’t wait to see what Valve does to top Portal 2.

2 Comments → Gamer’s Journey: Portal 2 is my Game of the Year