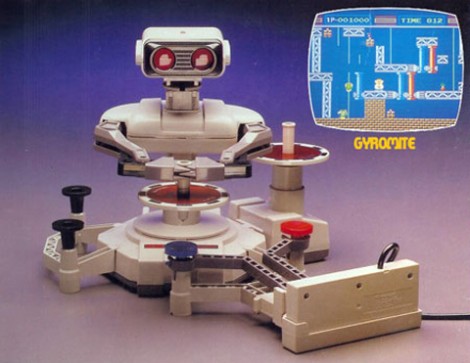 Ever since I was a child, I wanted to see the Robotic Operating Buddy for the NES, or R.O.B, in action. I’d seen about half of the pieces floating around my house growing up, but it always seemed like there wasn’t quite enough there to make it work. This thing looked like an awesome toy, if only I could use it. Every few years I think I tried to complete the machine and bring it to life, but with no success. Fast forward a full quarter of a century and my dream was finally realized. I had the chance to play the game Gyromite with R.O.B. and it was awesome!

Let’s backtrack for a moment though and talk a little about how R.O.B came to be. After the video game crash of 1983, Nintendo wanted to show that not only was its new NES console a great game system, it was also a toy, and toys are cool. This was also the mid-eighties, which meant one thing in the world of toys: robots! I know I sure loved my Omnibot growing up, so Nintendo was on the right track. The R.O.B. consisted of a robot that responded to on-screen flashes, much like the Zapper, a couple of gyroscopes with a powered spinner and a tray that held a second NES controller. When R.O.B. picked up a spinning gyroscope and placed it on the controller tray, it held down a colored pedestal which pushed one of the controller’s buttons, in turn affecting something in the game. Sadly, there were only two games ever made to work with R.O.B., Gyromite and Stack-Up.

I had the chance to play Gyromite, which is fine because I think it’s probably the more fun of the two games, from my understanding. Between one of my cousins and me, we found all the parts we needed to make it work. Our setup was a little… interesting, because R.O.B., just like the NES Zapper, doesn’t work with current LCD or Plasma TV’s. Where we played, we had the NES video signal split between two TV’s. We viewed the main game on a large plasma display, while R.O.B. sat off to the side staring at a tiny portable CRT on the floor. 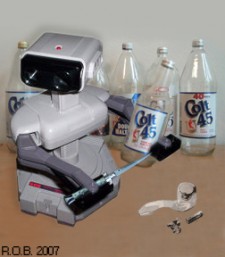 R.O.B. has some things in common with the Horrible Night staff

In Gyromite, the basic idea is that you are a Professor protecting your world from dynamite and some weird dinosaur/bird things. The goal of each level is to collect all of the dynamite without being killed. One problem is that, in each level, there are large red and blue gates blocking your path. This is where our Robotic Operating Buddy comes in. When you press the start button during play, the Professor can send a command to R.O.B. to pick up and move one of the two gyroscopes. To get through the level successfully, R.O.B. needs to place a gyroscope on the spinner to gain speed, and then place it on the red or blue pedestal, depending on which gate you want to raise or lower. While the gyroscope is spinning, he can let it go and grab the second one to raise or lower the other colored gate. Of course, if you take too long the gyroscope loses enough speed to fall off of the pedestal which can lead to unfortunate Professor Squishing Incidents™ if you happen to be standing under a gate. On the bright side, you can also squish the dino-birds (ok, they’re called Smicks, but I think dino-bird sounds better because that’s what they look like) with a nice POP. 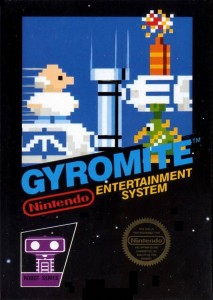 The voice in my head when I read the game title makes me feel a little racist...

Once my cousins and I had everything set up, we played for a few hours and were completely enamored with the thing. I don’t know if it was just the novelty (exactly Nintendo’s hope) or the difficulty, but either way, we had a blast. Of course, we had plenty of ideas for improvement on this 25 year-old device, the first of which being R.O.B.’s speed (he runs really, REALLY, slowly) but it gave me new excitement over something very old. It’s fun to see when a game idea is fun enough to stand the test of time when a new player picks it up. After two games in the Robot Series however, it seems that the NES became so popular that they didn’t need the robot/toy gimmick any longer. Personally, I think it’s time for an NES homebrew game to be created for this awesome device as well as a hardware hack to speed him up! All in all I’m going to give our friend, the Robotic Operating Buddy, a 3 out of 5 for being fun as hell but without the content to back him up.