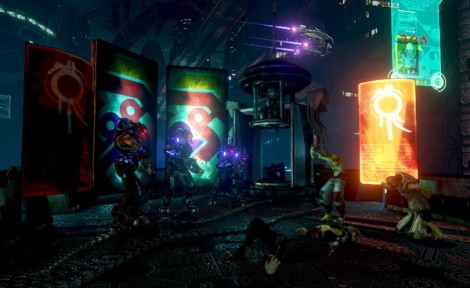 Not a space vacation

When I first heard the buzz surrounding Prey 2, I thought it was a joke. The original Prey had a lot of hype surrounding its release, but ended up just being a mess of a first person shooter. The franchise seemed DOA in 2006. So imagine my surprise when I hear “Game of the Show” being thrown around at E3 this year for its sequel. That made my excitement fairly high when I got a chance to see a live demo at PAX.  Prey 2 managed to somehow exceed the accolades, and jump to the top of my list of most anticipated games of 2012.

Prey 2 is an open world FPS and you take on the role of a human bounty hunter on an alien planet called Exodus which is a haven for mercenaries and criminals. The setting immediately feels like you could run into any number of your favorite sci-fi bounty hunters. The city is grim, dark and noticeably corrupt.

Gimme all your space bucks.

We witnessed the player take on a small number of quests which introduced the reputation system in the game. You can holster your weapon while walking around the city, so it’s important to be aware of your weapon as you talk to the many denizens throughout the world. Threatening your targets by pointing a gun at them could lead to any number of scenarios. Luckily, your bounty hunter is equipped to take on just about anything, so when your target takes off running, you can give chase in spectacular fashion.

You have gadgets that would make caped crusaders/vigilantes proud. If you lose sight of your target, you can switch views to track their DNA trail. The level architecture isn’t afraid to take you vertical and fans of parkour will be impressed with your bounty hunter’s traversal skills. Jumping, climbing and sliding into cover all looked not only effortless, but thrilling and fun to play. My personal favorite moment was a firefight that ensued while the player was hanging from rafters. The player could use the rafters as cover and pull himself up with one arm while firing with the other. The chase scene concluded with a capture via the player’s electric bolas where the player ultimately gets to decide whether to deliver the bounty dead or alive.

Prey 2 is about giving the player choices on how to handle various conflicts. When things get crazy, you can take hostages if necessary, but be warned as exploding heads at close quarters can be messy. Stealth, brutality or negotiation tactics will all advance the missions in unique ways. This is an open world and exploring Exodus without an active quest looks just as intriguing to me as the dynamic missions themselves. This is thanks in no small part to your character’s hover boots that allow for some extreme falls from high places. 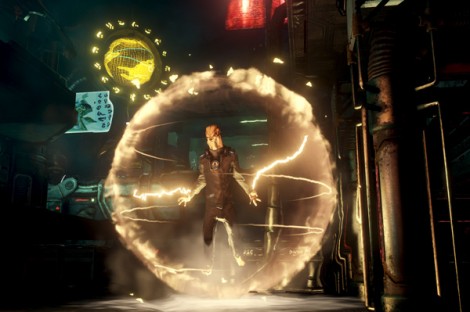 The only nagging thought that I couldn’t shake throughout the demo is why Human Head and Bethesda are even bothering tying the game into the Prey universe. Apparently, Tommy, the main character in Prey 1 will be around during a majority of the sequel. However, from the brief glimpse I got of Prey 2 and how far it has gone from the feel of the original game, it all seems unnecessary.

That’s it, that’s a nitpicky I could get. Can you blame me though? I had a stupid grin on my face from the second I realized how rich seedy the underbelly of Exodus really is and just how much freedom I will have on the world as a bounty hunter. My only real problem is that I have to wait till 2012. That won’t hamper my excitement or eventual enjoyment of Prey 2 though, as I’m ready right now to start the hunt.