Like anyone, I love an underdog story. Being the smallest of three siblings, I tended to associate more with the characters whose lives were more of a grind then a fanciful skip and I enoyed seeing the underwhelming overwhelm the over-hyped in dramatic fashion. That being said, it’s hard to swallow a concept that just seems way too unbelievable regardless of the inspiration it may produce. While most of you may have loved Mike Tyson’s Punch-Out!! in all its 8-bit glory, I thought it amounted to little more than a drug induced pipe dream injected into a snoozefest of a “boxing” game. 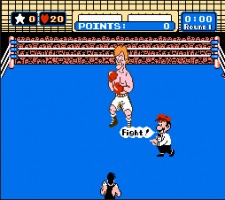 Glass Joe may have a bad chin, but Mac needs a step-ladder to even get close to it

I’m going to start with the obvious; Little Mac is tiny. Now, you don’t have to necessarily have a reach advantage over your opponents in order to be competitive in a fight, but it’s tough to string together a win streak like Mac’s when your opponents are literally two to three times your size. Getting inside is only half the solution, an NBA caliber jumping ability would be the other. Combine that insane height disadvantage with the fact that Mac, who appears to be a flyweight fighter is boxing with guys in the heavyweight division. Sure, he’s probably quicker but one of those hefty meat clubs will land eventually and after that, it’s lights out. That’s the very reason there’s a weight class system in the first place; tiny faces tend to implode when hit by gorilla sized fists.

I know boxing is corrupt, but did none of the Punch-Out officials even look into the unbelievable performance that this little dude was putting on against the best in the world? Not to take anything away from the average Joe putting in the time to perfect a hobby, but boxing is on a different level. He’s either hopped up on Meth before every match or his Mafia connections were threatening the other fighters’ families.

The rest of the world is evil 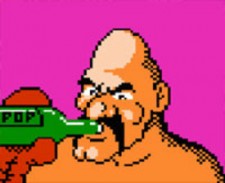 Writing "pop" on the side doesn't make it true.

Mac’s journey itself seems to be a xenophobic romp through the ranks of made up boxing circuits. What better way to get gamers excited about boxing then allowing them to pummel racial stereotypes in the shoes of a white American protagonist? Obviously Piston Honda is a great representative of the Japanese people because they all wear martial arts related headbands. Let’s not even get started on Soda Popinski (for those of you not in the know, this Russian fighter started off as Vodka Drunkenski because as we all know, Russians do nothing but drink vodka). I guess we should have expected that the first Indian fighter to climb the boxing ranks would bring a tiger skin to the ring and use his Indian magic to teleport all over the place because there’s no way he could deal with the fury of what amounts to be a small child.

It’d be one thing if these fighters were legitimate contenders, but they’re further disrespected by only being able to adhere to a puzzle like formulation of punches and posing that leaves them wide open for the counter attacks of their bite sized opponent (again, seems like fixed matches to me). We know you’re ripped Macho Man, but with pectorals like that you could easily put Little Mac’s head into orbit, why are you wasting time flexing and showing off to the crowd? Most of the fighters that get defeated in the earlier circuits are given the chance to come back later in seemingly stronger forms, but the differences tend to be slight alterations in their patterns. If I got my ass handed to me by some little punk, I’d do more than just extend my combination routine.

The same goes for Mac, memorization may have been the go to gameplay mechanic of the early years, but that doesn’t mean it’s all that fun. It’s like one slip of a sweaty finger tip could spell disaster for anyone with the hopes of making it to the last match. Hopefully, no one uses Punch-Out as the first step of a boxing career, most fighters don’t glow before unleashing a right hook into your face. 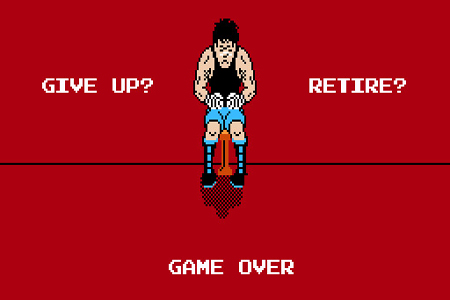 The most realistic scene the game has to offer.

The most ridiculous aspect of the entire game is the fact that this little tank top wearing douche even stood a chance against 80’s Tyson. I know some of you may be too young to remember Mike Tyson as anything other than an ear biting crazy person who made a cameo in The Hangover, but there was a time when that same fellow ran a train on the heavyweight division that saw him go 37-0 (with most of those by KO or TKO and quite a few in the first round). Plenty of well-intentioned pro fighters of his same weight class probably had Little Mac’s heart as well, they just didn’t have a head that could absorb cement. Even if Mr. Mac knew exactly what combos Tyson was going to throw and blocked them perfectly, he’d still have taken a brutal beating because his tiny hands just can’t put up with the fury that is Tyson. I mean, the guy almost beat a trash man to death for throwing an old pigeon crate away, you really think he’s going to take it easy on someone who dared step into the ring with him?

Plenty of people will talk longingly about their time taking Little Mac through the wild world of boxing, but most of those people were children when they did that and after years of seeing their dreams crumble, may not have such poetic words for the game anymore. If you like boxing, play Fight Night because Mike Tyson’s Punch-Out!! much closer to Dance Dance Revolution than it is to legitimate pugilism. Had Mr. Tyson known any better, they may have been some Nintendo executive ears added to the jar that houses Evander Holyfield’s (speculation of course, but I am pretty sure he kept it).