Healthy competition has helped grow the game industry into what it is today. This growth spawned fantastic debates like Mario vs Sonic. Rivalries have resulted in the premature death of genres like guitar games, but there is a genre within the industry that desperately needs more competition and that is sports games. 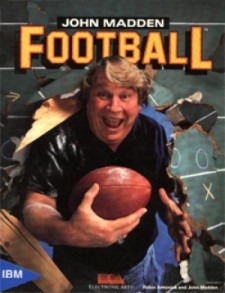 Boom! I'm the only one left.

Just six short years ago you had the option to buy two NFL licensed games. The first option was of course the infamous Madden branded games while their competition was the NFL 2K series. The core of the games were identical as they were both football sims, but there were a lot of football fans that felt the 2K series was the superior series. The mechanics in the game were more sound. The final 2K game was cheaper and featured ESPN personalities at a time when ESPN’s talent had yet to be fully taken advantage of in a sports game.

Shortly after the debut of ESPN NFL 2k5 the NFL decided that it wanted to operate like the most exclusive club in Manhattan. The NFL has always been about exclusivity when it comes to TV, advertisers, and branding. It’s the NFL’s way of making sure that quality is associated with the NFL brand. It boils down to the idea that, if you have enough money, you can come party with the league. At that time the NFL gaming license was up for bid and only one company would win. EA Sports ponied up the money to secure the exclusive development rights (the deal currently runs through 2012 season). Since then, Madden has been the only game in town. I feel that this exclusivity deal has made EA’s developers complacent. This complacency isn’t limited to football games, and it is hurting the sports game genre.

We all know that most sports see the release of a new video game based on their sport every single year (if not more). At times, it seems that they are just giving us a newer version of the previous year’s entry. Each year seems to be the same game with a little bit of polish over some of the noticeable scratches. I am aware that there is only one studio making each individual game, and that they don’t run under the alternating studio concept that others follow. With that said, EA just seems to be going through the motions with many of their titles. It has been so bad that EA recently did not renew its contract and walked away from the NASCAR-branded series all together. They never seemed to find a way to get the game right and just gave up on the franchise. NASCAR did toy with the idea of going to a multiple publisher model and eventually, Activision stepped in and snatched the development rights. 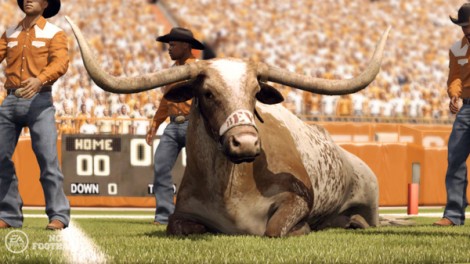 You are looking kind of bored there.

Now, we are left with EA making football games (NFL and NCAA) that aren’t fully thought out. I bought the recent NCAA game and was very disappointed in the ‘new’ dynasty settings. You now have the option to start your career as an offensive coordinator, defensive coordinator or head coach. My major issue with the mode is that you can be the head coach for the best team in the country right away. Why aren’t you forcing me to earn my keep by starting at a chump school? EA wants to inject more RPG elements into the game but acts like it has never played an RPG in its life (despite great RPG’s in its catalog). By trying to cater to everyone, every detail of EA’s games seems watered down and I’m not sure who these sports games are supposed to appeal to anymore. Are these games for the hardcore fan of that particular sport or for anyone to pick up and play? The cherry on top was the recent title update. I love to run a no-huddle offense and the update broke the hurry up portion of the game. Before the update, I was able to change to any formation no matter the personnel before a snap. Now, the game defaults right to the base formation for your team (UPDATE: the ‘no huddle’ bug has been fixed). This is where healthy competition is needed so we can be provided the football game on release day that I want, and fans deserve. 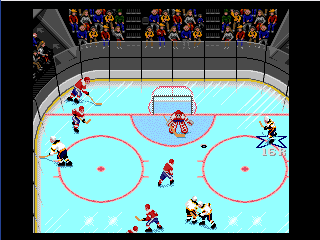 Still trying to top this one.

EA recently did get some major competition on two titles; in one case it rose to the challenge and failed miserably with the other. Even though it didn’t get into the exclusive football club, 2K has remained a thorn in EA’s side. The NBA and NHL games have had plenty of competition until recently. In the SNES and Genesis days, EA created some of the best NHL games ever made. Then 2K slowly crept into the picture. As time went on, EA didn’t have the share in the market that it used to and started to fade a bit. 2K provided a more realistic experience to EA’s arcadey feel.

In the past few years, EA has pushed the envelope with their NHL games. There has been a transition from arcade back to the realistic. EA Canada worked in very complicated means of shooting and puck control by using more of the analog stick. There have also been additions of depth of Be A GM (which is allegedly broken with NHL 12) and Be A Pro modes. Fans of hockey have quickly gone back to the franchise that they know, love, and grew up with. Heck, NHL 12 gives you the option of playing with NHL 94 controls (the best NHL game ever). A little bit of innovation and some TLC has gone a long way for the franchise. While EA is releasing NHL 12, NHL 2K12 has been quietly canceled. This may begin to sound like a very sad narrative for 2K Sports, but 2K does have a success story of its own: It has been given credit for making one of the best basketball games of all time. 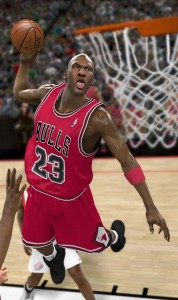 Quite the secret weapon.

Last year we were given NBA 2K11. Not only was this a licensed NBA game, but you could play through some of Michael Jordan’s greatest moments. The classic throwback game mode allowed you to play through some of Jordan’s greatest games (like when he dropped 38 points on the Utah Jazz in the 1997 NBA Finals while fighting the flu). The 2K series (across all sports) has always been focused on creating a real experience that forces you make things happen. This is a stark contrast from EA’s NBA Live series that (again) was similar to an arcade game. A common complaint with the Live series was driving and dunking was all you had to do to win a game.

Last year EA was going to re-brand its NBA game as NBA Elite (developed by EA Canada because of their rebirth with the NHL series). The goal was to create a title that focused on a more realistic approach, but it quickly it became clear that there were issues with the development of Elite. The game was pushed back many times and the demo of Elite showed many technical issues within the game play and the AI. The game was turning into a total train wreck and, ultimately, never saw the light of day. EA cancelled the game and turned the keys over to Tiburon (a long-time Madden developer). Asking Tiburon to restart the NBA series is no small task and kind of a slippery slope for the developer. Madden 12 was not the best reviewed game in the history of the series, and taking eyes away from a game with issues could lead to more issues. I know EA successfully relaunched the retro classic NBA Jam last year, but Jam is not a title you should release every year (and here comes round 2). You never know, the NBA lockout might be timeout EA needs.

EA’s Sports division continues to consistently disappoint when compared to its more traditional side of the business. The amount of blood, sweat, tears, emotion and care put into games like Battlefield and Mass Effect is readily apparent. EA Sports used to create fantastic titles but now these games leave me with a ‘blah’ feeling. What used to be a fun and exciting sports experience has become the same thing over and over again. It’s baffling to me that two divisions of a company can sit on complete opposite ends of the spectrum. It’s disappointing because a lot of us grew up on EA Sports’ titles, and I’m scared that some of the problems within in the sports division might spill over into its more traditional games (it seems that EA is having major issues company wide). 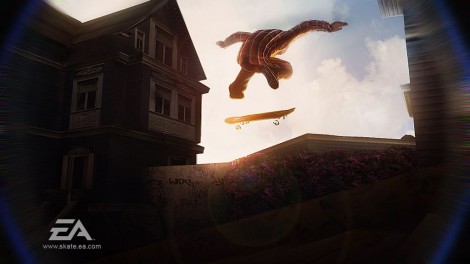 Proof that the creative spark is still close.

The growth of the sports genre has helped made EA what is it today. The steady and consistent product that the sports division provided allowed EA to take a lot of risks while it grew as a company. Now its sports franchises are in total disarray. Hopefully, the relaunch of titles like SSX can give EA the kick in the ass that it needs. I may be getting ahead of myself, because we should consider that the Skate brand once sang us a siren song of hope and optimism, but it’s now fallen mute. There are a lot of things that I would do to improve the Madden and NCAA games, but EA has to dig itself out of the hole that it created on its own. Until someone different wins the NFL or NCAA contract or EA Sports gets its collective head out its ass, we as gamers will continue getting an average product despite the consistent, favorable reviews. The press needs to be more critical when reviewing these games and stop giving EA the benefit of the doubt. If we do not take a more critical stance when looking at these games, we will never get the titles we deserve. Until things change, my confidence in the EA Sports brand will continue to be nowhere what it used to be.

5 Comments → It’s No Longer in the Game