It’s a known fact that the gaming industry is becoming over saturated with zombies. They’re spreading into every genre about as fast as the T-virus infection which created them all in the first place. On the positive side, zombies usually seem to contain more blood inside of them than is humanly possible making them quite fun to shoot at. If you’re into brutally killing that which is already dead, Edible Entertainment has the game for you. Veks and Silence is a side scrolling zombie shooter that takes a lot of its root gameplay from the classics, Metal Slug and Contra. Your basic objective is help Silence, an overweight, cancelled video game hero with a bag over his head, get from one end of the screen to the other while blasting your way through hordes of enemies coming at you from all directions. Silence’s only true motivation for leaving his couch is to aid his partner Veks, who, regardless of getting a prime spot in the game title, only exists in the story cuts. Together you plan to take down the evil Hate Brand and their zombie apocalypse while hopefully dodging school buses full of screaming children in the process. 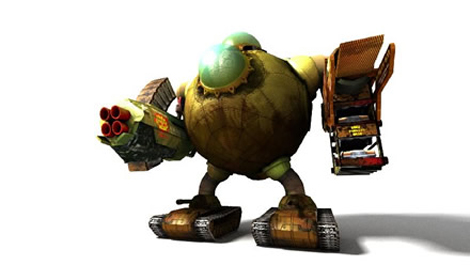 At first glance, Veks and Silence is kind of what you’d expect from an Xbox Live Indie Game.  It’s missing that polish that comes with a major title. The box art is ok, but once you launch the game, the title artwork isn’t super impressive, the music is kind of weird like it might have been made with the default samples in Fruity Loops, and you might be asking yourself at this point why it’s $5 instead of $1 like most of the other indie content. Unfortunately, many games on XBLIG fall victim to the pricing structure where everyone expects something great for nothing. Just because it’s not a from a major developer doesn’t mean that they didn’t put blood, sweat and tears into making something for you. Anyway, Veks goes for gold, offering 13 levels and tons of replay value in survival mode to help justify the  top-tier indie game price.

Past the menu, the game did take a turn for the better. I really dug the hand drawn comic art style used in the cut scenes, and the story was humorous and somewhat creative. My first thought was that the game could have improved itself up-front by utilizing the same style on the menu system as they did on the cut scenes. Call me critical, but I’m kind of a stickler for good interface design. In all honesty though, I can look past an ugly menu if you bring it with your gameplay which Veks most certainly does. I have to say that I wasn’t disappointed with the graphics of the actual game. Sure, it’s no Crysis, but I think it works for the style. The low poly 3D took me back to something I would have played in an arcade growing up, and I found myself wanting to play it on an arcade machine. Even though the game is side-scrolling, a ton of 3D work has been done. The levels are extremely detailed and vary a lot from level to level. There is quite a bit of character animation between Silence and the baddies as well as additional background environment animations that add to the visual appeal of the levels. There is a wide range of enemies in the game from your standard zombie including robots and flying sharks with butterfly wings. There are two major bosses as well as a few mini-boss type characters that take a little more work to take down. The background music and sound also worked much better for me once I was rearranging faces. It’s pretty repetitive, but it’s fitting and the levels are short, so it works. 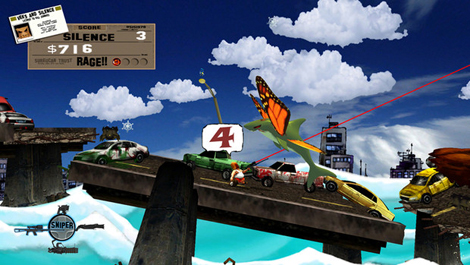 This should be a Jaws movie.

Hard enough for you?

One thing I noticed before I jumped right into the action was that at no time was I prompted to select a difficulty. The first few levels must have been to just get you used to the flow of the game, because it isn’t long before they crank up the heat. Once your “training period” is over, the game isn’t very forgiving at all. With limited lives and no health bar, you have to channel you inner Contra master and make your way to the end without getting hit. And sorry folks, the Konami Code doesn’t work with this one. With enemies coming at you from all directions as well as turrets with pinpoint accuracy, you can become frustrated quite quickly trying to survive. Oh, and did I mention no checkpoints? If I had a dollar for every time I was 5 feet from the end of the level and lost my last life I could fund the Veks sequel myself. They do at least give you the benefit of unlimited continues. Through 13 stages, the game never lets up and gives you a break. Once it gets difficult it stays true to the end. 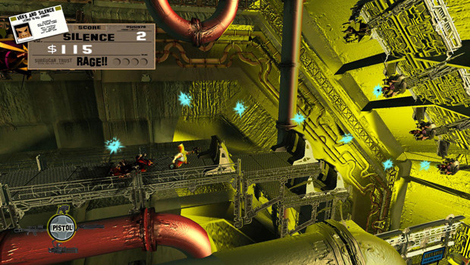 To aid in your destruction you’re given four different weapons with unlimited ammo, as well as unlimited bombs, which basically act as grenades. Even though you have a variety, I ended up finding myself just alternating between the starting pistol and the shotgun. You can pretty much equip either of those and just run and button mash your way to the end of the first few stages. I found the sniper rifle a little difficult to aim, even though it was pretty much a one shot kill for most enemies, and the chaingun just slowed you down way too much and took away jumping as an option. That’s right! They actually took the time to make each weapon affect your character movement. The bigger the weapon, the slower you move, and the more holes you fall in trying to clear large gaps. Which is something I appreciate, but I found myself having to equip the pistol a lot just to get from area to area. 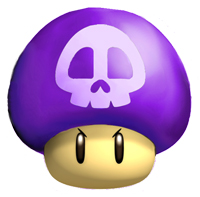 To aid in your quest at staying alive against the Hate Brand, Silence will encounter two basic power-ups that can help you get through the game. You’ll run into crates containing short-lived shields that will let you absorb damage, but the more beneficial power up is Rage. As you kill enemies, the game keeps a streak count. If you hit 10 kills without getting hit or changing weapons, you earn a Rage token. This basically makes you invincible to all attacks for a decent length of time.  The trick is keeping track of your counters and switching weapons after ever 10 kills to earn as many tokens as you can. It does a nice job of reminding you to switch if you aren’t paying attention by popping up a little bubble next to Silence. If you play your cards right, you can almost Rage your way through all of the tough spots, but as the game goes on it gets harder to keep your Rage inventory full. If you find yourself getting stuck, just pay attention because every level follows the same pattern with each playthrough. You can easily anticipate where the enemies are going to come from in order to help you reach victory. You’ll also run into extra lives here and there, but be wary of the occasional poisonous mushroom, which must pay homage to the insanely difficult Super Mario Bros: The Lost Levels. In case you didn’t figure it out, it kills you.

Despite having 13 stages, Veks and Silence isn’t super long. There are two bosses you encounter that can both be fairly difficult until you figure out the strategy behind taking them down.  They both tripped me up for a little while, as well as the excruciatingly difficult level 9, which, from what I’ve read, becomes the premature end to the game for a lot of players. All in all, it kept me busy for about 4 hours from start to finish on the story mode. If you’re better than me, I’m sure it could be done in 2-3 pretty easy. The real replay value comes with Survival Mode. With each level you make it through in the story, you unlock a survival level. It’s basically more of a score-based, arcade-style version of the game where you’re just given one life and you have to last as long as you can against an endless wave of enemies. Definitely a smart move at giving you the most value for your money.

Stop laughing at me

Aside from the poor menu artwork, the game was far from flawless. Like I mentioned before, the lack of a difficulty selection will turn away a lot of players. The game does all of its level loading during the cut scenes. There’s nothing wrong with this except the loading seems to interfere with the slight bit of animation they did try doing. Fades between screens got chuggy and little looping animations kept skipping. I also noticed a question mark at the top of a few loading screens where you would normally find the progress counter if the level was still loading after the cutscene ended. I can only assume the screen was waiting for the counter, but it just looked broken to me. There were noticeable breaks in the looping audio as well as this annoying repetitive laugh that I couldn’t quite figure out what it was for. It didn’t bother me at first, but it happens almost every 10 seconds. I couldn’t figure out if I was laughing because my shotty to the face was so perfect, or if Silence is just crazy, but it definitely got distracting after a while. The frequency could have been turned down about 400%. I also ran into a few weird camera angle glitches that made it difficult to see what you were doing, and your occasional bottomless pit as you fell into a hole that went way further than you were supposed to before the kill function was executed. Most of these things are minor issues that get sacrificed in a low budget title, which I can understand, but I’ve also played cheaper indie titles with fewer glitches.

Overall Veks and Silence was very entertaining. I highly recommend it for anyone who enjoys a challenging side scrolling bloodfest. Comparing the game to other XBLIG titles, it doesn’t quite have the level of finesse that I’d expect from a game asking 400 points, but they somewhat make up for it in replay value. You get a lot of game for your money and you can never go wrong when you’re supporting indie games and splashing zombie blood all over the screen.