While it’s probably difficult to communicate how much I love the Aliens franchise on the big screen and in print, it’s not hard to express how I feel about its history in video games: with the exceptions of Aliens Versus Predator 2, Aliens (the Konami arcade game) and Aliens vs. Predator (the Capcom arcade game), there haven’t been any games produced from this universe that could even be referred to as “decent,” and whenever I think about that fact, it makes my heart hurt, like a chest-burster was getting ready to pop out. 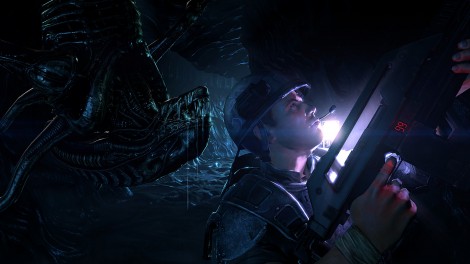 Fortunately, from the look I got to have at Sega and Gearbox Software’s Aliens: Colonial Marines at PAX and the enthusiasm with which the production team pitched the game, I think all of that was just a nightmare and I’ll be able to dream safely again. Almost five years in development, A:CM has been an ambitious project from the start that had to travel a bumpy road, but it’s finally got a ship date in late Q1/early Q2 2012 and while I’m sure Gearbox will be tweaking until the last minute, I could barely restrain myself from grabbing the controller and seeing if the game was as intense and fun to play as it looked from my spot against the wall.

Are we in for a stand-up fight or is this another bug hunt?

The one thing that was clearly radiating from the presentation team was pride in their work and, when you add up all of the things that have gone into it, it’s not difficult to see why:

That said, it was pretty funny hearing them explain that when they realized that they were responsible for the real sequel to a hugely popular and successful movie:

It became pretty clear, pretty fast, that this was a huge project and…well, we’d better not fuck it up.

And from what I’ve seen…they didn’t.

In the pipe, five by five

When you’re making a game set on LV-426 and in Hadley’s Hope, you’ve pretty much set yourself up for how the tone and set of the game needs to go; Gearbox’s presentation seems to have nailed it. As opposed to an open-field shooting gallery, the gameplay that I saw had the marines enclosed in the claustrophobic habitat from the movie and under attack from all directions – ventilation shafts, raised floors, dropped ceilings and camouflaged xenomorphs hiding amongst piping. When atmospheric tension is as critical to a game as it is to A:CM, the sound design plays a huge role. Happily, the semi-mechanical shrieks of the xenos, the half-ray-gun / half-submachine gun sound of the pulse rifles and the hopscotching-the-black-keys music are all present and accounted for. Just writing about them makes the hair on the back of my neck stand up.

Oh, you want some of this? Here you go!

Equally as important is whether the combat was able to distinguish itself at all from the hundreds of other bug-hunting shooters – while the build isn’t complete, it sure appears to (although I’m reserving judgment as regarding one element – see below). If the entire gameplay mechanic were based on just spray-and-pray, I’d rather make out with face hugger than get excited…but somehow, I think Gearbox knew that, because I saw fellow marines ambushed from hidden xenos and watched the demonstrator kill or drive off the bug and save his pal to keep his firepower in the mix. Further, while AI teammates are always a mixed bag, it appeared that your NPC allies were actually bringing the pain rather than just firing for effect until you had cleared the room.

17 days? I hate to burst your bubble, but we’re not gonna last 17 hours

There were a couple of other surprises (check out the official page here and the Gearbox forums’ FAQ here) and some cliff hangers (why did it take the Colonial Marine brigade 17 weeks rather than 17 days to respond to Bishop’s distress call?) but only one thing that made me raise my eyebrow in critical surprise. As far as I could tell, in this playable build somewhere around 6 months from release, the xenomorph’s extremely acidic blood doesn’t seem to be of concern. It burned through multiple decks of Lt. Ellen Ripley’s first ship, the Nostromo, killed Pvt. Drake and put Cpl. Hicks into a coma. During the demo, I saw a xeno dispatched with a .45 at extreme close range with no adverse affects to the shooter, which just isn’t going to fly when it comes to one of the defining characteristics of the xenomorphs. (Don’t get me wrong, I’m still going to buy it, but if Gearbox doesn’t address the issue, I’m going to be pissed.) 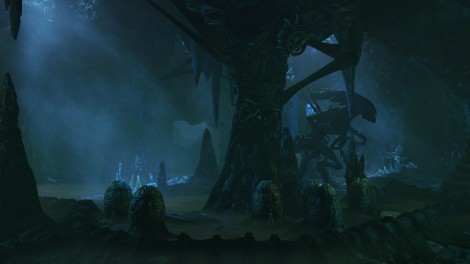 I think I left my wallet right over there! By the fleshy egg-looking thing. Be right back!

Aliens: Colonial Marines is expected to come out in Spring of 2012 for XBox 360, PS3 and PC and will include drop-in/-out co-op gameplay.