On September 8, 1966, Gene Roddenbury sent Captain James Tiberius Kirk and his crew of intrepid explorers on a mission to visit strange new worlds and boldly go where no man (or vulcan) had gone before. Since that date, there have been 11 feature-length films, 4 spin-off series, some very questionable marketing devices, and 1 worthwhile video game. One, people! (Unless you count Cryptic’s MMO, Star Trek Online. Which I don’t, because I don’t play MMOs. Even when they’re free to play). Since The Original Series is considered the second-most influential TV series of all time (after All in the Family), there are 4 other spin-off series and every one of them is full of space ships, ray guns, hot green chicks, monsters, moral dilemmas and pseudo-science, you’d think that in 43 games (at last count), at least a couple of them would have been great, considering the ample source material. And before you go off saying that this shooter-based game was great or that flight-sim game was solid: this is my column, I only vaguely recall the shooter(s) and while it did have some good voiceover work, Legacy needed Captain (highest rank achieved) Montgomery Scott to fix its control mechanics.

Sidenote: The upcoming game tied to the next J.J. Abrams Star Trek re-boot sequel (tentatively titled Star Trek), debuted as a trailer at E3 2011 looks like it might make a play at a solid Star Trek Universe game. Considering Roberto Orci and Alex Kurtzman, the writers of the film, are overseeing Marianne Krawczyk’s script treatment (The God of War franchise, Prince of Persia: Forgotten Sands) there’s hope for a coherent storyline and the action (we assume) game looks like it might buck the trend). But there’s still plenty of room for more good Star Trek games. 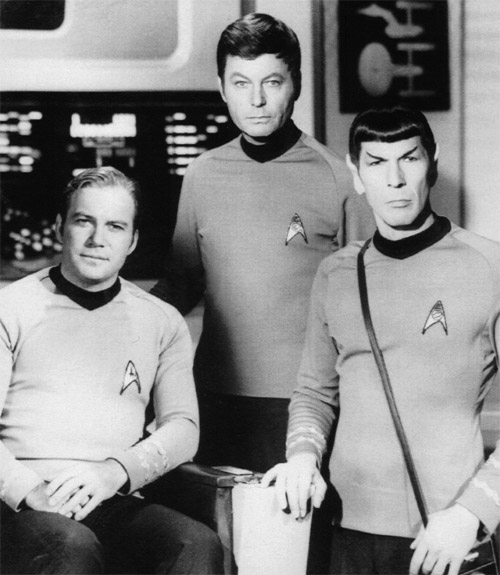 Instead, we’re stuck with crap like Star Trek: Klingon and Star Trek: Deep Space Nine: Dominion Wars, which is just depressing and needs to be fixed. George Lucas may be a retconning sonuvabitch, but there are more good Star Wars games out there than bad ones, so what gives? Let’s do a slightly more detailed run-down of all the cool shit in the Star Trek universe just to point out the fact that there is so much material in here for great gaming experiences (that you don’t get from most other film-based IP) that for you guys to not abandon Modern Warfare 17 and Madden 47 like rats fleeing a sinking, flaming ship infested with 28 Days Later-style zombies and crank out some quality Star Trek games makes me question whether or not you are actually part of a Borg collective, intent on destroying society with mediocre, annually updated games. 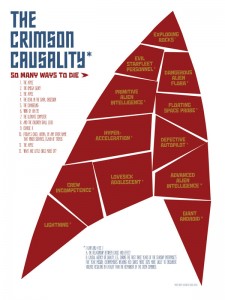 The best games have cool “stuff” to play with; whether it’s blades of chaos, chainsaw bayonettes, plasmids or the sheepinator, if you’ve got unique gameplay elements, you’re at least partway to a great game. But I’m not telling you geniuses anything you don’t already know, right? I mean, you came up with the vision cone… Hrm. Perhaps I should explain: when you’re talking about cool shit with wide-ranging implications, phasers are one thing, but you can’t top “Beam me up, Scotty,” (The theoretical quantum mechanics behind them is pretty fascinating, too). While we’re at it: tricorders, shuttles, warp drives, photon torpedoes, VISORs, cloaking fields, the holodeck…well, I could go on and on, but suffice it to say: there are a lot of neat toys. On top of that, the entire universe lends itself to a variety of different gaming genres, yet for some unexplainable reason, I’m stuck playing (and you’re stuck making) Madden 2012.

Want to make an FPS  (because we clearly don’t have enough of those) or FPS/RPG hybrid? Star Trek is perfect and there are 45 years of plot lines (and a split universe, thanks to J.J. Abrams) to chose from. You fellows over at Bungie looking to make a space combat game like that sweet level in Halo: Reach? Star Trek is full of space ships. How about a TBS or RTS based on controlling the neutral zone? Want something Populous-esque? The Federation has weather controlling capabilities that also generate power (see: Kardashev Scale). Considering your average hurricane has the energy equivalent of an 8,000 megaton nuke, you could have some sadistic fun violating the Prime Directive. What’s that? You want a game with Kinect support? Take the zen-game approach of Solar 2 and have people go on exploration missions classifying stars and nebulae. Slap an E-rating on it and boom! Instant Astronomy 101 purchases at universities everywhere. (Okay, that last idea maybe isn’t so great…maybe a med-bay surgery simulator?)

Considering the incremental “improvements” to the series you’ve worked on, I think it’s safe to say that you’re lazy, so do I have a selling point for you! If you want strong characters, Star Trek’s got them in spades (although if you want their voices, you’d better hurry, some of them are getting pretty old). Rather have the strong, silent type with a player-determined background? A legion of redshirt ensigns awaits your selection process.

It’s not like I’ve spent hours and hours planning this out and I’m not going to spoon-feed you all of the details (partly because I’m running up against my knowledge of Star Trek trivia), but I hope you are beginning to get the picture. Between the Borg, the Romulans, the Klingons and ze Guhmans, you’ve got plenty of bad guys to draw on and if none of them appeal to you…guess what? You can straight up make a new one up, like in Insurrection, or you can bring one back from the “dead,” like in Wrath of Kahn. You’ve got tag-lines galore, and perhaps most importantly, a fan base so big and dedicated that at least one movie and a spoof have been made about them. They make Packers fans look like Seahawks fans.  If you started turning out some quality Star Trek games, it’d be a license to print money (you need a license, ’cause if you don’t have one, it’s called “counterfeiting.”) 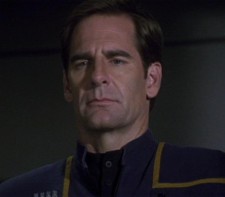 Yes, Archer's my favorite captain. Hey, at least it's not Janeway.

It’s been 45 years and in the last 30, there’s been a single great Star Trek game and it was a top-down aracadey shooter. I know you think you’ve got a sure thing with the gold mine IP’s you’ve been haphazardly working on (nice job with all of the gameplay mechanic improvements in Black Ops, by the way), but remember Guitar Hero? You need something with some staying power, and you don’t get much more staying power than you get with Shatner. It’s been four and a half decades. It’s time for some good Star Trek games. Get on it.

PS – Now that I think about it, Superman’s been around even longer and there’s only been one good Man of Steel game, too. WTF?