Being a monster is a loophole in my “always the good guy” gameplay routine. Monsters HAVE to destroy cities and eat humans (even babies, sorry, from their vantage point they can’t tell the size difference) as it’s part of the natural order. Without monsters, humans would go unchecked and overpopulate the Earth, causing environmental catastrophes that could spell the end of our fair planet. I suppose that if monsters went unchecked, the same thing would happen, but that’s where monster hunters and mechs come into play. It’s the circle of life, people. Anyway, some of you may be in the dark a bit about the best ways to go about living out your fantasies of monster-hood (and I‘m not talking tentacle porn here folks), so I’ve gone and compiled a convenient list of games that explore the world from the vantage point of these horrifying (yet satisfying) beasts. 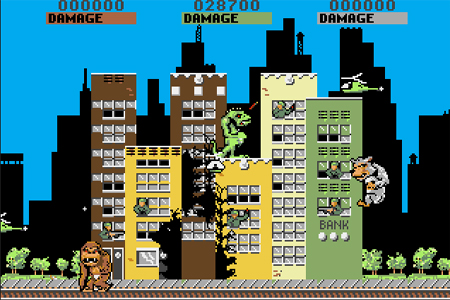 Good thing those buildings are color coded, living in that city could get confusing

Rampage was a classic side scrolling arcade brawler with a twist: instead of punching goons in alleys you punched buildings and tanks as you stormed across the country causing mayhem that would make Godzilla say, “Whoa bro chill out, you’re making a scene.” First released in arcades in 1986, Rampage put you in the role of three humans whose run-in with puberty skipped the acne and gym class boners, instead transforming them into a giant wolf, lizard and ape. Like any rational person going through such drastic changes, they opted for smashing cities as opposed to internal dialogue and support from family and friends, making for a really terrifying scenario for the residents of those cities but a really fun game for those of us with enough quarters. Since then, the game has been released on multiple consoles with added tweaks to the gameplay and graphical upgrades. The classic arcade experience is by far the most memorable for me even though Rampage: Total Destruction (Wii, Game Cube and PS2) boasted over thirty different monster choices, which was pretty incredible. 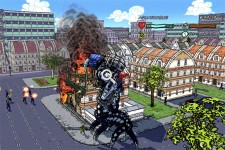 While "eating them" is important in this game, so is "stepping on them" and "throwing them".

A recent acquisition for me, Eat Them is a PSN exclusive title that puts you in the role of an evil mad scientist with a doctorate in monster creation. On top of the utter enjoyment of destroying cities and tiny army men, Eat Them allows you to customize your own horrible monsters with body parts earned throughout the campaign. The game boasts over 5 million combinations (though quite a few of those come from palette swaps) but it’s pretty easy to make anything from laser-wielding robots to alligator creatures with sledge-hammer arms. The game is all about mindless fun, so it should provide some relief from long hours of multi-tiered quests and tactical shooting. 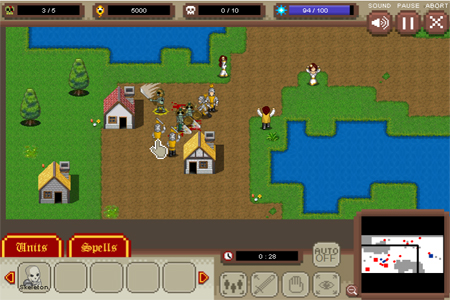 Should have purchased the Necromancer insurance...cheapskates.

I posted a game called Infectionator a while back, which put you in control of an army of zombies slowly overrunning the earth. Necronator is a similar game developed by the same group (Togo Productions) but it feels more like an RTS and features a medieval setting chock full of peasants ready to be overtaken by the forces of evil. Necronator allows you to control mobs of monster, including skeletons, ogres and zombies as well as destructive spells that make things even more hopeless for the villages and castles you’re tasked with destroying. Don’t let the browser based nature of this game turn you away, it’s incredibly fun and features a shocking amount of depth. 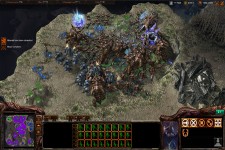 It's like a Justin Beiber concert, just replace the preteen sweat and tears with blood and slime

Taking control of the Zerg during a multiplayer match in StarCraft II feels much different from anything the RTS world has to offer (I understand that Dawn of War II has the Tyranid, so don’t geek check me folks). You don’t take ground as much as you infect it and the sight of your oozing hive growing across the landscape is very satisfying. Numbers are the key, and while there are many different creatures to throw at the Terrans or Protoss, I still love a flood of Zerglings over anything else. It harkens back to the days of my Aliens obsession and the way the Xenomorphs followed a similar strategy of consumption and multiplication and it just makes me smile. Unfortunately, my personal expertise at Starcraft II is not quite where it should be and I tend to lose before I can see my insect legions overtake my adversary, but that’s where low-level computer opponents come in to play. I am getting pretty excited about the next Zerg-focused StarCraft II expansion and hope that all my disgusting dreams of slime fueled cosmic infestation are further realized. 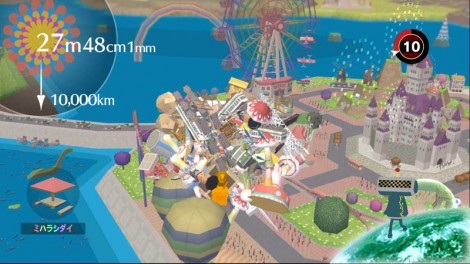 He's got the whole world in his hands too, though I'm more comfortable with God in that position.

People might flip their lids when I toss the playful, cute and über Japanese Beautiful Katamari into the fold, but it’s place is validated. While the Prince may have good intentions on the surface, his exploits still require him to destroy large sections of the Earth. Do you really think all those screaming people are happy about being crushed under the weight of tons of junk then hurled into outer space? The Prince is a monster wrapped in a pretty little package and his destructive capabilities put others on this list to shame. If you really want to know what it’s like to have people fear your presence, roll their planet up in a ball and smile the whole time you’re doing it. In the words of Denzel Washington from Training Day, “King Kong aint’ got nothing on Katamari.”

Video games make it very easy to take on the role of a trash talking super soldiers, mystical ninjas and well-endowed sorceresses, but being a human being can get old after while, even with the powers they may possess. When I get tired of running around in a flesh tuxedo, I switch roles with the usual targets of my digital exploits and trample humanity under the scaly, slimy or hairy feet of monsters. Whether you’re smashing buildings, conquering villages or bowling with pieces of the Earth, the work of a monster is gruesome but unbelievably fun. If you feel guilty about it later, pet a puppy, that seemed to work for Buffalo Bill.

Game Connoisseur – Gaming is already a very stimulating and often times personal experience, but every gamer thirsts for a way to take that experience to the next level. This series will deal with ways that video game enthusiasts can enhance or even alter the way they play in order to prolong the longevity of a beloved title or discover something new.

1 Comment → Gaming Connoisseur: Tired of Being a Human? Be a Monster!