Racing is a part of the American psyche. People spend thousands of dollars every year to follow their favorite driver around the country. It also has a huge presence on television with an entire network dedicated to racing. But what about the non-regulatory racing that is also out there? This is where I thrive and what I enjoy. Over the years I’ve won a ton of races. Finally, I became a champion thanks to the lessons learned from Super Mario Kart.

The Lessons of Super Mario Kart: 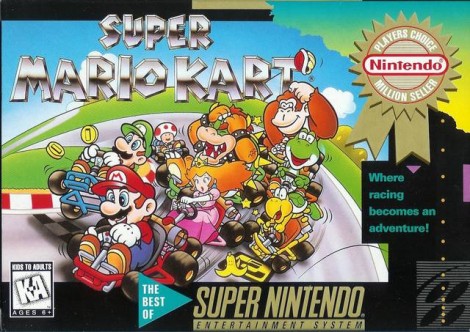 Everyone join in for some good old fashioned kart racing. Even you, Donkey Kong.

Racing is better with weapon generators

I learned something today. I woke up to this envelope at my doorstep inviting me to the Super Circuit track. I didn’t know what to expect. As soon as I got there I was shuffled into this private garage where I saw the most beautiful go-kart imaginable. It was equipped with this awesome feature where it could generate different weapons out of thin air after running over a specially marked tile on the race track. I wasn’t too sure if it would actually work until I got out on the track. It was the best thing that could have happened to go-kart racing. If I got too far behind, I could always count on the random item generator to come through with something I desperately needed to get back in the race. This type of thing should be equipped on regular cars. Especially the ones who drive ridiculously slow in the fast lane. Thanks, Super Mario Kart.

I learned something today. I used to spend a lot of time with my friends. We would go off on crazy adventures in different worlds. Sometimes I would get so wrapped up in the adventures that I would dream about them. But when it comes to a competitive sport like racing, there are no friends allowed. Why would there be? I wouldn’t want to help my friend win first place if I could be the winner. I am not above using a heat seeking turtle shell to knock them down a few pegs. Can’t let them get to far ahead now can I? We can be friends again once the race is over, I may even decide to save you yet again from our worst enemy, but for now I’m going to win the Special Cup. Even if it means knocking you off of a rainbow, bitch. Thanks, Super Mario Kart.

I learned something today. Sometimes you have to cheat to get ahead. Other times you have to know how to use what is given to you. I’m not much of a cheater, but I know how to take advantage of items to further my goal of winning the race. You see, some brainiac decided that we would race at a haunted house. On the surface it sounds really cool, but in actuality those houses are always run down and full of places where people could fall and get hurt. But the smarter racers knew how to use this to their advantage. You see, during the race your kart can generate a feather. Once used only for tickling, stuffing pillows, and giving certain unnamed Italian plumbers the ability to turn into a raccoon and fly, feathers are now able to make go-karts to jump. In the haunted house, the feather is especially useful at jumping across a chasm to a long pier-like platform. It’s a dangerous move, but the rewards are usually first place. And remember, second place is the first loser. Even in go-karts. Thanks, Super Mario Kart.

Gold coins are for speed, not spending 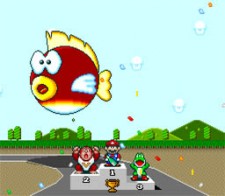 Don't be alarmed. It's a celebration.

I learned something today. In normal society, gold coins are highly sought-after collectibles that often make the owner a very rich person. But when used on the race track, they have a totally different use. Coins can actually increase the top speed of your kart. That is mind blowing! I had no idea that gold coins had this ability. It defies all logic. I knew that they provided wealth and once you collected a certain amount it could add a life, but for something so innocuous to have the ability to make something with a combustible engine travel at a faster speed is incredible. Why this technology hasn’t been transferred (or even transfarred) over to regular cars is beyond my level of comprehension. Just imagine how fast my car would go if I had a bunch of gold coins. Not to mention the fact that, when you hit somebody, you wouldn’t take any damage to your car, you’d just lose some coins. Insurance rates would drop around the world. But the cost of gold coins would skyrocket. Never mind, I’d rather have multiple lives than a faster car. Thanks, Super Mario Kart.

Racing, especially go-kart racing isn’t for everybody. It is very specialized and quite difficult to master. However, through practice and some patience, you too could take home all the gold medals. Hell, you might even get to race the Special Cup someday. I’ll see you there. Over the rainbow. Thanks, video games.