A shot of whiskey, 3 cans of Red Bull and a rare T-bone steak, the breakfast of champions. You’re probably eating oatmeal or Kashi while you read this, which is a great start for a teacher or mid-level corporate executive but would barely carry you through the first wave of monsters that I deal with on a daily basis. My name is Serious Sam, and I take my job pretty seriously, especially in my latest exploits, Serious Sam: Double D. The fact that you’re reading this also means you’re alive, which can be attributed 100% to me…you’re welcome.

For those of you that know don’t me, I’m a time traveler with a penchant for shooting monsters. Imagine that charity marathon you just participated in, but instead of fellow runners striving for a similar goal, they’re all chasing you in hopes of eating your face. That’s basically my every day life. I’m not really into dealing with dramatic plots and I don’t understand the mechanics behind time travel, so don’t even ask. The time wasted on that stuff would be a detriment to the stamina needed to run, jump and shoot gigantic guns without stopping. 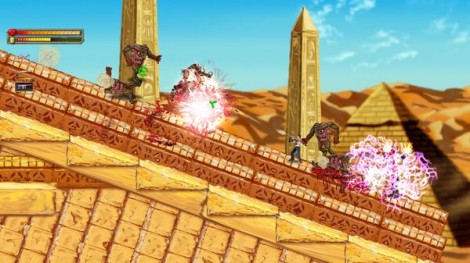 And you thought the civil unrest in Egypt was bad...

Anyway, my latest adventure is comprised of the same type of action I’m used to, but from a two-dimensional perspective. My goal, as it has always been, is to navigate different areas and shoot anything that gets in my way, and a lot seems to get in my way. There are just as many monsters trying to chomp on my testicles as in previous scenarios and things are still very intense, but that’s why my name is Serious Sam and not Laid Back Larry. If you’re familiar with my buddies Mad Dog and Scorpion and their Contra exploits, then you’ll understand what I’m dealing with.

I thought the waves of creatures in my previous encounters were overwhelming but I gotta say that Double D really throws everything it can at me. Bad guys just appear out of thin air, so my head is constantly on a swivel, as are my hips (being limber is grossly overlooked in sci-fi combat). The usual units of the Mental army are there, such as the one-eyed Gnar and Beheaded Kamikaze units, but I was shocked (and a bit excited) to see a few new enemy faces as I tore through legions of zany foes. I guess that nothing should surprise you if you happen to be in this field of work, but I almost pooped myself when I got attacked by amputee chimpanzees throwing exploding bananas. I also dealt with a living stacks of pancakes that exploded upon death, a giant beetle that could only be killed by shooting it in the butt and freaking dinosaurs that were about ten times my size. I definitely had my work cut out for me. 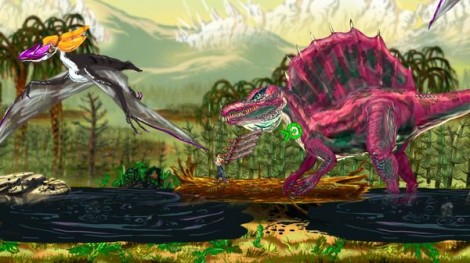 If kids knew how dinosaurs were in real life, they wouldn't wear as many T-shirts embroidered with the prehistoric jerks

Luckily, I ran across a new gadget to aid me in dealing with the odds stacked against me, a gadget that lets me stack the odds right back. Duel wielding is pretty sweet and a true testament to manhood, but now I can stack up to six guns on top of each other and shoot them all at the same freaking time! The gun stacker definitely is the best thing since sliced bread (this coming from a dude that loves sandwiches, especially paninis but I don’ call them that because it sounds pretty girly, they’re either melts or toasty hots). Machine guns on top of shotguns, chainsaws on top of flamethrowers, lasers on top of rocket launchers, it’s like a layered cake but with guns! It’s a good thing I do thousands of push ups everyday as the brute strength needed to perform such feats is well beyond that of normal men, but luckily normal men weren’t chosen to keep the Earth safe.

Those expecting me to show off something flashier or more in depth can go jump off a bridge because regardless of the way other action heroes have sold out in an attempt to attract a more mature audiences, I’m not changing my ways, regardless of the technology available (stealth, a skill set for people that can’t win fistfights). I’m not dumb, I’m just direct and Double D was a simple, fun and at times hilarious way to kill some time (and a ton of jerk face monsters). For my fans, this short romp is a perfect segue nto the third chapter of my story (which will be out later this year). Check Double D out on Steam or XBLA right now or else I’ll scissor kick your grandma.