Well, the cycle has returned. I’m back into wrestling for the millionth time. Thanks to the recent return to reality based angles with CM Punk quitting after winning the title, I was re-hooked. But as I was watching and anticipating WWE ’12 the video game to be released, I started thinking about all of the old wrestling games and what made them either great or really poor. Boiling it down to a genre, wrestling games are fighting games and the developers of these games think of them as such. It’s hard to reproduce the types of storylines (which is what many people are drawn to in the sports entertainment world) and thus has to be lumped in with the Street Fighters and Mortal Kombats of the world.

That’s okay on the surface and has led to many great games being released. But as the technology in the consoles improves, the ability to increase the realism of the wrestling game also takes place. Which doesn’t necessarily mean good things for fans of the genre. The storylines produced are either copies of what has already taken place in the year leading up to the release of the game, or the developers try to come up with a “Road to Wrestlemania” type of story that has you taking a created character from rookie to Superstar and main eventing at the biggest event in sports entertainment. While those two takes could be interesting for people who only play the games and don’t follow along on either Monday or Friday nights, people who watch Raw and Smackdown religiously don’t really want to relive a storyline they already watched play out. 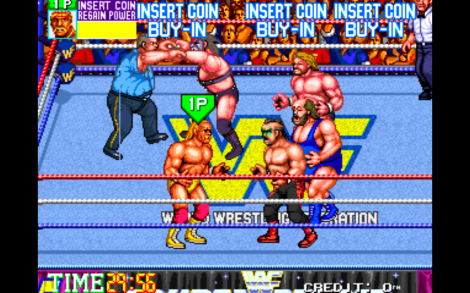 Yet, the storylines weren’t really an issue in the early games of the then WWF. Arcade games like WWF Superstars, WWF Wrestlefest, and WWF Wrestlemania brought the hard hitting action of the Ultimate Warrior, Hulk Hogan and Randy “Macho Man” Savage to arcades and grocery stores in small town America. But the home console is where I really got into the wrestling game. I became friends with this one guy solely because of our shared love of wrestling and he had my favorite NES wrestling game: WWF Wrestlemania: Steel Cage Challenge. It featured 10 playable wrestlers and was the first console based WWF game to feature a steel cage mage. It was a mostly punching and kicking affair but it did have some recognizable wrestling moves. The best part about the game (other than the cage matches) was the chip-tune versions of the wrestler entrance themes. And they still actually sound pretty good. The next game that got a ton of run whenever I went over to a different friend’s house was the Sega Genesis version of WWF Royal Rumble. It was the second in the LJN developed “trilogy” that were released for the 16-bit systems. Again no storyline focus due to the technology limitations, but the gameplay was a lot more recognizable as actual wrestling. For the first time in a wrestling game that I played, finishers were now included. I remember thinking that it was so cool to be able to tombstone Hulk Hogan with the Undertaker, or make The Million Dollar Man tap out to the Hitman’s sharpshooter. My friend and I spent many hours performing every finisher maneuver and I still look back fondly on that Genesis game. 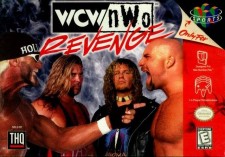 I love Raven, but still can't believe he made it on this box.

Wrestling took a huge upswing in popularity right around the time the Nintendo 64 and Sony PlayStation were released. THQ was the first to capitalize on the bandwagon first with its WCW focused games and then eventually WWF when it acquired the license from Acclaim. The first WCW game I played was WCW vs. The World for the Sony PlayStation. It wasn’t a terrible game, but it wasn’t that great either. You could definitely see some advancements made to the genre but the load times were horrendous, as it was with most PS1 games back then. One of the best features was the amount of playable wrestlers. There were only 14 WCW wrestlers but around 40 “fake” wrestlers that were based on real wrestlers from real Japanese promotions. Fire Pro Wrestling did this as well with its rosters but I didn’t play much of FPW until FPW 2 for the Game Boy Advance.

After WCW vs. The World, THQ switched platforms to the N64 with its AKI developed wrestling titles and made the first of the four greatest wrestling games ever made. WCW vs. nWo World Tour was the first of these games and led to many great battles with my friends. With 21 “fake” wrestlers and 21 wrestlers from the WCW and nWo factions, there were many characters to choose from, all offering different move sets to defeat your opponent. WCW/nWO Revenge was the sequel to the first game and the last WCW game before THQ acquired the rights to the WWF who had started to destroy WCW Monday Nitro in the television ratings around this time with Monday Night Raw. The first WWF games released on the Nintendo 64 were developed by Acclaim. Yes, I know they came out on the PlayStation as well, but I didn’t play these games on Sony’s platform. They paled in comparison to the THQ games especially when it came to the control. AKI had found the perfect formula for integrating different moves within the confines of a standard controller, and remains to this day my favorite way to play a wrestling game. The only area where Acclaim bested THQ was in the presentation department, but we play games to play them, not just to look at the pretties.

It’s all about the game 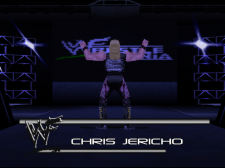 The Ayatollah of Rock and Rolla

When WWF Wrestlemania 2000 was released my friends and I were all over it. Especially Justin L. He was never a big fan of wrestling until this point and time but he loved his wrestling video game. He got so good at reversing every single move we tried to throw at him, that it almost ruined the game for everyone else. Nonetheless, we spent hours upon hours trying to beat the crap out of each other and it remains today as one of my favorite local multiplayer gaming memories. AKI continued to build on their WCW engine, but was able to finally use the WWF license. With the release of Wrestlemania 2000 and No Mercy soon following, we finally had the introductions of storylines to a wrestling game. They are no longer are just fighting games but use the fights to move the story along. This changed the way I enjoyed wrestling games but I loved the first iteration as it was new and different. My have things changed.

I know there are a ton of games that I have skipped over, especially some of the more ridiculous ones like WWF Wrestlemania The Arcade Game and WWF In Your House. But admittedly I didn’t play much of those games. I just wanted to start out by focusing on the golden age of wrestling video games. Next up, I’ll turn my attention to wrestling games during the PS2 era and beyond.