There is a serious matter that must be addressed. If you weren’t aware, the fall buying season is right around the corner. This fall is filled with a ton of titles that end with a crooked number. A lot of these releases are ending trilogies that have provided this console generation with great gameplay mechanics and fantastic storytelling, which brings up a question: Should you play current gen titles in order? The answer is: Probably.

Stories aren’t what they used to be 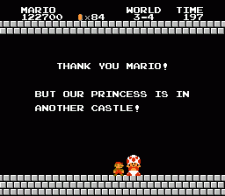 There once was a time that it didn’t matter what order you played a game in. I played many NES games out of order (I beat Mega Man 2 & 3 long before I even touched the original Mega Man). Stories back in the day tended to be very vague and there wasn’t much focus on canon back then; typically a sequel was a rehash of a previous tale. The best example of this is Super Mario Brothers and Super Mario 3. Each game contains essentially the same “narration,” but only introduces new game play elements (SM3 added in the Koopa Kids and a map but the levels were all classic platforming). The reason that Mario risks his life by confronting rabid turtles and marauding mushrooms seems to always stem from the Princess being abducted.

Historically, we don’t talk about great storytelling when it comes to Mario games. We tend to talk about the platforming innovations that Mario brought to the table. There were some NES games that contained very strong narratives (for the time). Final Fantasy was very story driven, but remember that each Final Fantasy game is a new entry that is independent from the previous games. The only direct sequels in the Final Fantasy world are X-2 and the soon to be released XIII-2. The many adventures of Link are not exactly within a set canon, either. The Adventure of Link was one of the only direct sequels taking place within the world of Hyrule. A lot of the Zelda games reintroduce a “new” Link (typically via a prophecy, i.e. Wind Waker). If we discussed the NES further, you would find that either stories are all over the map or not canon and therefore irrelevant when it comes to playing a series in order. Fast forward to the current console generation, and we are fortunate to be given beautiful, story driven games that you need to play in order.

Is the cause worth fighting for?

Sometimes, console exclusivity can hurt a franchise. Some gamers were unable to experience how great Mass Effect truly was because the original was only on Xbox 360 and PC. Newbies to the franchise were provided a nice little comic to read all about it when they purchased Mass Effect 2 and while I am sure that the comic did a great job of conveying the struggle you faced as you patrolled the galaxy, I bet that the questions for new gamers surrounding the mission from Mass Effect seemed very daunting, since all of the choices you were provided in both games felt extremely important.

Wait! I’m pretty sure that the comic was not a Choose Your Own Adventure book. The comic most likely served its purpose of alleviating confusion and providing a few distilled choices, but it is likely that many questions remained. One can assume that the comic covers the key moments within the story, but there was so much more to the first game than just the main plot line.

Ultimately, BioWare did something very special with Mass Effect. I found myself making decisions based on emotion for the first time I can remember in a video game. My emotionally-based decision making has crafted the Commander Shepard I know. I’ve been fortunate. My Shepard is a very deep and complex character that has been very carefully crafted by me from the start. Many emotions have been poured into every conversation, battle, and major decision since the first game. All of the events and their outcomes rest on my shoulders. I didn’t have a comic tell me how the story should go. Going into the final chapter, I know what is at stake and what the crew of the Normandy is fighting for. I am excited to face all of my decisions head on. Mass Effect 3 isn’t the only game that features a deep story line that would be confusing to enter mid-stream. However, if other exclusive sequels out there were ported to Xbox I would not want to start at 3 and get a supplemental reading guide. It’s just not the same.

How will you save Earth?

The growth of the internet has made it very easy for someone to catch up on a game’s storyline in minutes rather than hours, but reading a wiki or watching a YouTube video will leave the story devoid of its emotional impact. Wikis and YouTube are the video game equivalents of Cliff’s Notes. It is my preference to live out a game’s story, no matter how corny the writing can be. Speaking of corny, let’s look at Gears of War for a moment. First, off Gears will not be receiving any awards for Excellence in Writing anytime soon. With that said, the bones of the story are solid. Each protagonist has his own motivations and reasons to fight off the Locust invasion. As I spent more time in the game, Delta squad began to feel real (despite the meathead dialogue). Their fight quickly became my fight. I became emotionally attached to the characters and the universe they live in. There are parts to the story that have made my jaw hit the floor, and there are other moments that leave me feeling sorry for members of Delta Squad. This is a classic example of me getting lost in a game’s storyline.

I’m sticking to my throwing knives

Some people read fiction to escape reality, but I prefer to play out my fiction. The narratives of today’s games are fantastic pieces of fiction that can be played out. Skipping a title in the series could leave you lost and confused. Look at it this way: Would Lost make sense if you started on the third season? I am sure that the story would leave you scratching your head, for starters. Sprinkle in having no idea who the characters are or where their motivations lie would complicate matters even more. Games from this generation deserve the same respect. I’m playing my games in order. No matter how far behind I am in the series. 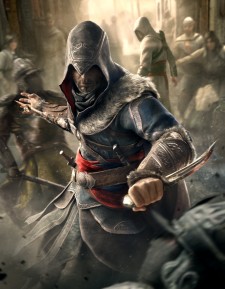 We need to find a way to make this relationship work.

When it comes to Assassin’s Creed, I am currently working my way through the second game. As you may already know, Assassin’s Creed: Revelations will be released this fall. This means I am way behind since Revelations will be the fourth overall game in the series. Revelations will conclude the Ezio trilogy and somehow tie him back to Altair (protagonist of Assassin’s Creed). I am very curious to see how the two are connected, but I refuse to skip over a title. I will pursue answers with Ezio despite my distaste for him. Ezio and I are stuck together for three games, so I have to make this marriage work. I want to make it work because the narratives for Assassin’s Creed are just as deep as the characters. The beginning of Ezio’s story is very complex, but I understand that the complexities will be sorted out by the time the trilogy is completed. I know that many questions will be left unanswered along the way. I want to experience these revelations (see what I did there?) for myself.  At the end of the day, today’s video game narratives are experiences.

The story has evolved

Digesting a series of shows or movies by bouncing around is never recommended, and the same can now be said for video games. The overall experience in games has changed drastically in the last decade. We are now seeing narratives that I would have never imagined 20 years ago. Of course, you can go into the wild and craft your own game experiences, but my advice is to do yourself a favor and play today’s games in order.

6 Comments → Press Start at The Beginning, not The End