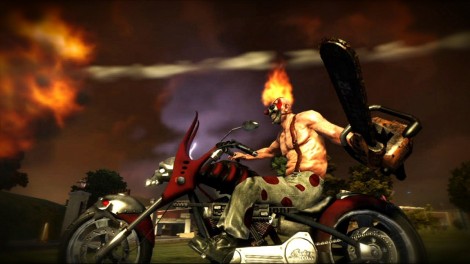 This guy's neighbors were starting to worry about him, once February rolls around they'll understand he has a purpose.

Twisted Metal will be released and fortunately for all you lonely single people out there, it’s coming on a day that tends to cause you quite a bit of depression. Yes, now instead of drinking boxed wine and crying over pictures of that girl/guy that you liked in high school but who never knew you existed, you can blow crap up in vehicular based combat scenarios.  That’s way better than a night out and guaranteed sex (whoops, sorry, my sarcasm face doesn’t translate to written word).

All kidding aside, I’m really excited that a date has been set as the delays had me a bit worried, though a bit of extra polish never hurt anything.  As a side note, included in the announcement was a pre -order bonus that will give you access to “Axel”, a character that is stuck between two wheels and literally forms the axle of his vehicle. This is great news for people that like goofy concept cars, though his lack of body protection always prevented me from utilizing him during my time with Twisted Metal 2, I have a weird sense of video game morality.