Recently it has come to my attention that people around me are having children at an alarming rate. And with this stunning revelation I have begun to think about the act of raising those children. Most parents will be asking themselves questions that many parents over the years have asked. What should I feed my kids? Where are they going to go to school? Should I take them to church? But the question I am most interested in and have been thinking about a lot lately is this: Should a child be brought up playing video games the way many of us were brought up?

Getting fresh with the NES

Back when I was a child, video games were just beginning to take hold of the young, soon indoctrinating them into the ways of jumping on Goombas and eating mushrooms to make yourself bigger. Before even Super Mario Bros. and the NES crashed the shores of the United States, systems like the Atari 2600, Intellivision, and the Commodore 64 were already taking hold of children and giving them an entertainment option indoors when the weather outside was less than ideal for a game of flashlight tag.

Back in the Day

The first system I played at great length was Mattel’s Intellivision. My dad had purchased it for $200 in 1981, the year before I was born. I’m not sure how much he played it, but I played it so much that I wore it out. Lock ’n’ Chase (a Pac-Man clone) was my favorite game and one I played the most. Wearing the system out left me console-less for a period of time until the video game savior came home.

Before I was given the NES on Christmas Day 1989, I experienced the NES for the first time at a friend’s house down the street. This friend was extremely important in my development as a gamer as he always had the latest and greatest systems. He even had the Power Glove (it was so bad!) He was a little bit older than me and I learned all the tricks and secrets to beating Super Mario Bros from him. By the time I FINALLY received the NES, I was a pro. 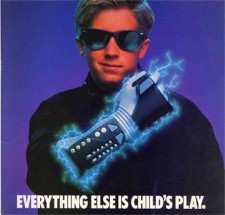 What does all this history mean? I made the logical progression from the pre-NES era, all the way to the current generation of hardware and almost everything in between. I feel safe in proclaiming THAT is the way to learn how to play video games. You dump a 6 year old kid into Street Fighter IV and even though as a button masher he will probably whip you, he won’t know how to throw a fireball or do a flip kick. You know, the important things in life.

That’s why I’m saying that kids need to learn their history and at least start at the NES. The Wii’s Virtual Console is a haven for games of old. You have the standouts and the rare. According to Wikipedia as of April 21, 2010, there are 354 games available on the Virtual Console covering a variety of systems. 87 on the NES alone! I know I never owned anywhere close to that number so there are many options for training a child.

Some parents might balk at the cost of the training regimen but I remember renting a ton of games from Blockbuster, and these Virtual Console games don’t cost much more than those rentals did back in the day, and I didn’t get to own those games.

With Game Room being recently released on Xbox Live, there is no reason why they couldn’t begin their history even before Nintendo took over the gaming world. Now is the time to have the kids go back and play some of their parent’s favorite games from the past. There are many options to bring this to fruition, more so now than ever.

Despite the obvious benefits of training on the classics, kids today are missing out on some great games if they never go back to play the games of old. Crowning achievements like: the Legend of Zelda: A Link to the Past, Final Fantasy VI, and Mega Man 2, while clearly dated in terms of gameplay and graphics, still hold up in many ways today.

People still read timeless books and watch classic movies, why can’t the same be done about video games? Now I’m not going so far as to say that the history should be studied in academia, but why couldn’t it be taught at home by a parent who wants their child to learn on the games he/she played as a child.

When the day comes and I’m lucky enough to have one of my own progeny running around this Earth, you better believe that kid will learn the Konami Code right along side his ABC’s.