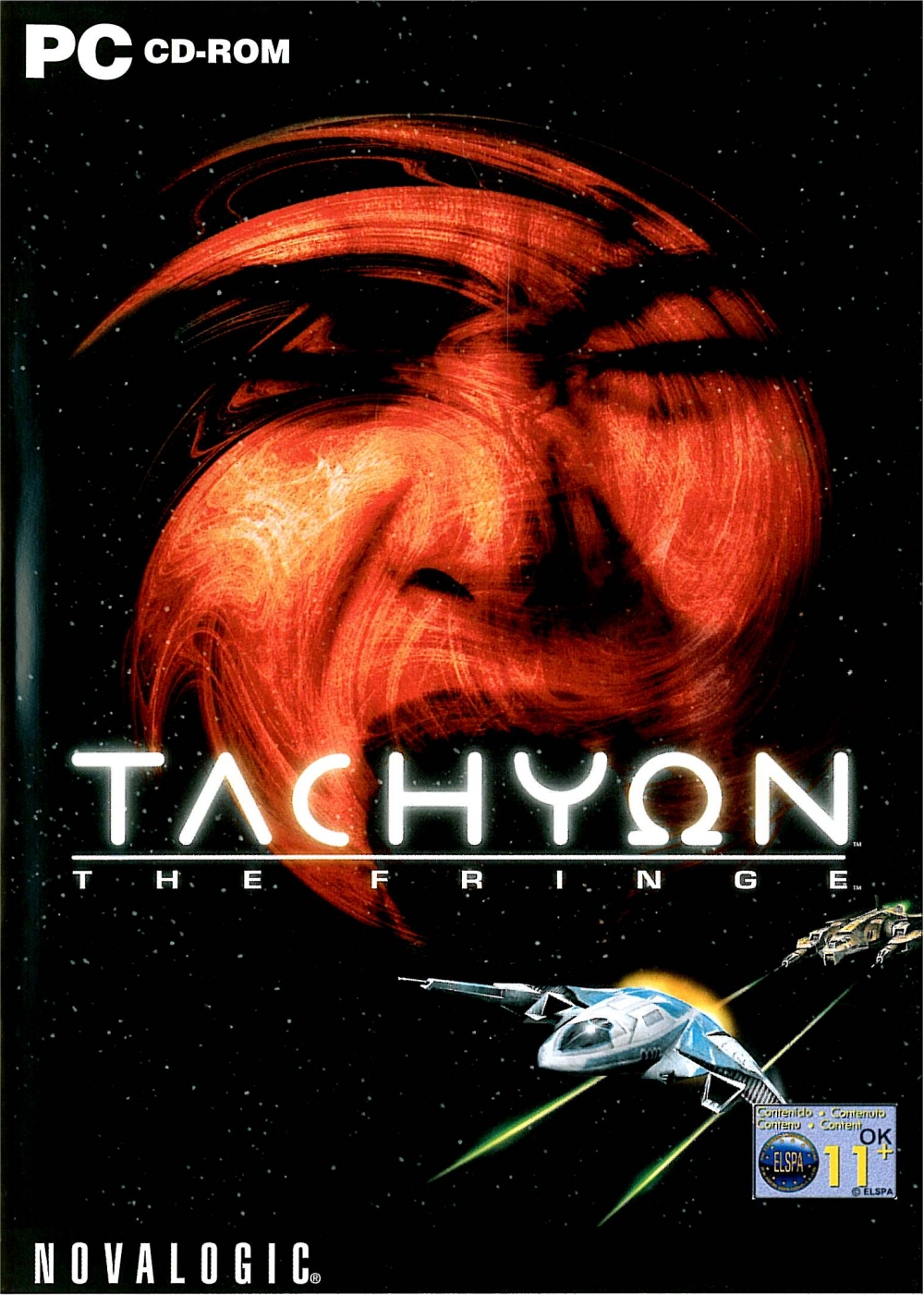 After I got my appetite whetted for mech-combat with Trenched, it got me to thinking about my other increasingly rare gaming passion: space combat simulations. It’s been a while since I really got into a space combat sim excepting the level in Halo: Reach, which prompted a little thought about the last (good) space combat sim I played – Tachyon: The Fringe. When I mentioned the title to Justin L., the reaction wasn’t quite what I was expecting. Although we were on gchat at the time, I imagine his expression was something along the lines of a blank stare. A blank stare!? About a branching-storyline sci-fi space combat sim?! For shame!

Wait. What’s that? You haven’t been to the Fringe, either? You’ve obviously missed out, and here’s why: 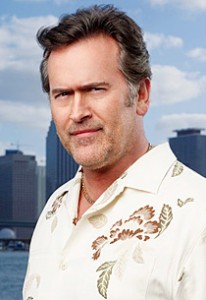 Anything that BRUCE CAMPBELL (whose name is always capitalized. Always) touches is gold and, since he did the voice work for Tachyon: The Fringe, QED, kids. Although he’s not the first gigantic celebrity voice in a space combat sim (Mark Hamill in the Wing Commander series has that honor, I believe), his work in the game has the highest awesomeness quotient ever, and not just because he portrays Jake Logan, a combat pilot framed for the destruction of a space hospital and exiled to the lawless Fringe on the edges of human space colonization. (See how much cooler everything is when you put “space” in front of it?). BRUCE CAMPBELL does the wrongly-accused-hero voice better than anyone in the business (don’t believe me? Check out Burn Notice) and considering your choices in the game, he’s perfect for the job.

Although its contemporary, Deus Ex did it better, Tachyon: The Fringe presented you with a choice immediately upon your arrival in the Fringe – work for Galspan Corporation as a pilot providing security for their ships and doing various deeds of moral gray-ness for high pay or join the rebellious Bora, fighting against the Galspan Corporation’s desires to control and profit from every resource and person in the Fringe. While it seems like a no-brainer (pick the good guys!), Tachyon: The Fringe hews close to sci-fi standards and the Bora have, you guessed it, underpowered ships.  Damn you, George Lucas, for your plucky rebellion and their rag-tag band of fighters, I got stuck flying a piece of junk with no hidden compartments or a hyperdrive that would make .5 past lightspeed.

So, I did what any self-respecting mercenary on the Fringe of lawless space would do: I started over and joined Galspan. Steady pay check, better ships…and not a lightsaber wielding hero in sight. The “branching” storyline did give you discrete levels between the two factions (and the opportunity to play some of the bigger missions from both sides), but it was actually just two branches with two different endings. Still, for the time, the game had a lot of other things going for it, not least of all the graphics.

Let’s face it: 11 years is an eternity in the graphics world. Still, for the time, Tachyon: The Fringe had some great looking graphics even if the aliasing, modeling and textures haven’t aged all that well in the meantime. Regardless of some of the aging graphical benchmarks, developer NovaLogic seems to have had someone on its design staff who recognized the fact that flight control surfaces (e.g.: wings) aren’t necessary in the vacuum of space and, therefore, your ship design does not have to conform to aerodynamic principles. In other words: the ships you could buy (especially if you’re working for Galspan) are really, really cool looking. I’m not going to lie: the fact that the most powerful Galspan ship looked like a clutching crescent-shaped claw and was called the Orion may have had something to do with my affection for the game. 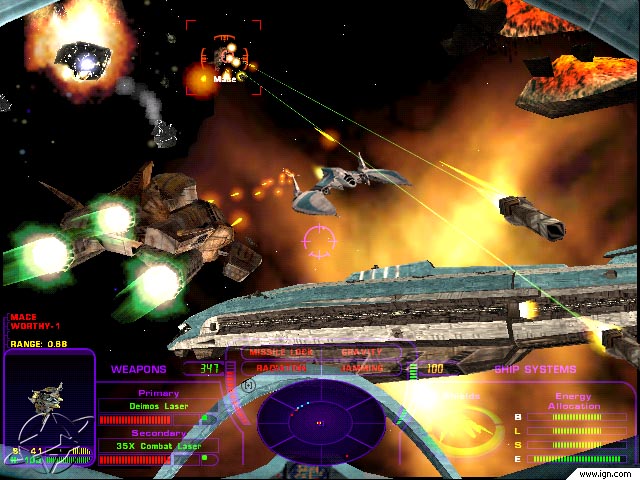 That's what I call a "Target Rich Environment."

Unfortunately, no one let the design team know that George Lucas has done more to screw space combat games than just dictating that all rebellions have underpowered ships (see: my decision not to play as the Bora). Since Lucas based the Star Wars combat off of WWII gun-camera footage of dog-fights, everyone treats the control mechanics and physics as if fluid dynamics were still at play and taking place in only a single gravity well with nary a reference to acceleration curves or laser-based weaponry’s tendency to lose efficacy over distance and…sorry, I just geeked out.

At any rate, the combat was fun, but like most other space combat games, involved a lot of looping the loop at a lower velocity than your enemies to get behind them. This was mitigated, though, by the fact that you could hire up to 3 squadmates (who had various strengths and weaknesses) to help out and weren’t the run-of-the-mill Slippy the Toad cannon fodder – not only would their presence help diffuse a concentrated group of enemies from attacking you, they would actually kill enemy fighters and help you out. That’s right – competent AI squadmates from a decade ago. Tom Clancy’s H.A.W.X. 2 could learn a thing or two. However, despite some of Tachyon: The Fringe‘s achievements, it wasn’t immune from a couple mortal sins of action-games.

That’s right. The mission types that everyone loves to hate were plentiful in Tachyon: The Fringe. Although they’ve gotten (slightly) less frustrating over the years since 2000, the escort missions were as frustrating and obnoxious in Tachyon: The Fringe as they have ever been. Heck, as much as I wanted to play as the plucky underdogs, one specific escort mission was so brutally-hard-bordering-on-impossible that I gave up on following the light side of the force and restarted the game, this time with Galspan. There were still escort missions, but having access to more money and better ships made a world of difference in protecting some dumbass convoy from pirate attacks (in other words: Peace Through Superior Firepower). 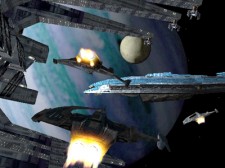 A lifting body is not a prerequisite for combat in vacuum.

Although everyone knows that there is no affront greater than sticking in an escort mission or two to lengthen a game, Tachyon: The Fringe also had a gladiator mode. It didn’t bother me at the time, but it definitely does now. Games have certainly grown since then, but the inclusion of Coliseum-type options to earn money in games where you upgrade your equipment with cash seems to me like another we-need-more-content cop-out. There’s really no set up needed beyond: “Hey: there’s a contest you can keep going back to make cash. You just need to fly here to trigger the combat and be the last man standing. Flying. Whatever. The more you come here, the harder it gets.” Meh.

Those were the days

After 11 years, a game has to be pretty good to stick with you in the way that Tachyon: The Fringe has stuck with me and it certainly was (and not just because BRUCE CAMPBELL was in it). Unfortunately, 2000 was probably the last great year for space shooters as that was the year I also played Star Wars: X-Wing Alliance, another great space shooter. Since then, it’s been hard times on the genre. Still, Tachyon: The Fringe did things very well and if you can still find the copy (and put up with aged graphics), I’d give it a look – there’s just something cathartic about using particle accelerators to reduce your opponent to ionized gas, especially when BRUCE CAMPBELL is taunting their demise.