REPLY TO ALL is a weekly feature where the Cursed, through email, debate a certain topic. Check out the previous REPLY TO ALL’s here. This week’s topic: Is it cool to out yourself as a gamer?

Back in high school I always had some trouble admitting that I was a gamer. I’m not ashamed of it now because that is who I am and always will be. I think more people than ever before play and are into video games which makes it more acceptable to admit to it. Especially if you are trying to get a date with the hottest girl in school. But realizing how unimportant being ‘cool’ is, doesn’t come until a few years after you get out of high school. Anyone in your life who judges you for being a gamer isn’t worth knowing. Gaming is fun, entertaining and it can bring people together socially. Some of my greatest friendships were built because of our mutual love of videogames. So it doesn’t matter if it’s ‘cool’ to out yourself as a gamer. If it is who you are, don’t hide it.

I wouldn’t say I’m ashamed of gamerdom by any means. Being that the game industry is bigger than Hollywood I’d say there are a few other gamers out there with me. I do think, though, that it’s still considered to be pretty geeky to the people who don’t really play games. (My wife, for instance… but she puts up with me, so it’s all good) I have fun acting super nerdy and saying dorky things when I talk about games sometimes. All in all I wouldn’t say it’s necessarily “cool” to say you’re a gamer, but I don’t think it’s really considered a negative thing either. Geek is chique, right? I don’t have a problem with telling people of my adventures in Hyrule saving Princess Zelda. They might roll they’re eyes a little, but deep down they know I’m awesome…….. I think.

I agree, cool tends to only apply in high school, and I’m not sure outting yourself as a gamer then is the best thing you could do if you are concerned about your rep. Gaming is a lot more mainstream these days, and anyone who feels alone in their game love really needs to attend the Penny Arcade Expo – http://www.paxsite.com – and feel at home. There are a ton of us out there and we are only growing. It is incredible.

However, I still think there are a few different groups of gamers that may have trouble waving their flag, and you can’t group all of us together. So I thought I’d help to let each group know if it’s ok to put gamer on their dating profile.

I couldn’t help but laugh with Justin’s group #5. I’ll admit, I do feel like a bit of a puss when I whip out my DS in public. Can we say puss on here? Not quite as much with the PSP, but I never barely ever play that anyway.

I still feel like it’s definitely not “cool” to be a gamer in the sense that it’s a desired, attractive trait that one would see fit to openly advertise about one’s self. It’s cool to be in a band, to own a business, to be an artist, to live in a swanky penthouse downtown…telling a girl that I have 1030/1030 gamerscore in Mass Effect 2 is never going to impress a non-gamer on the same level as those aforementioned things. The difference is, as you guys have alluded to, society has shifted to the point where gamers are no longer really ostracized. Basically, I can tell a girl that I’m a gamer, and while that’s not going to make her want to jump my bones any harder, it’s not going to be a dealbreaker, either. I think that’s where you see the shift.

I’ve honestly never really had a problem with it. Even growing up, the majority of my friends played games and that’s continued throughout. And while none of us were the star quarterback, we certainly weren’t getting our heads shoved in toilets either. Even in college, almost everyone I knew enjoyed at least the occasional game of drunken MarioKart 64. As far as the stereotypical gamer goes, though, I think Justin’s categories are apt. There is a world of difference between a Madden playing bro and people writing WoW fanfic, even though they are both video game players. For myself, I like to at least a little in each genre, not getting “fanfic” super intense about any of them, and I feel like you can fit in just fine. And yeah, your girlfriend/wife will probably make fun of you a little but that’s their job.

I agree that the categories set forth by Justin are fairly accurate. I also think that gaming is continuously becoming less geeky and more of the norm. That makes me extremely happy. Even though the Wii has obvious shortcomings, it has brought a ton of new gamers to the industry. Despite what some people might think, gaming has gone mainstream. Hell, even the Beatles have a video game. As long as developers keep making games for the ‘hardcore’ gamer, I don’t mind the influx of ‘party’ games. If I can get my non-gaming parents to play something on the PS3 or Wii, its a good thing. I don’t care about the coolness of being a gamer. Once everybody games, it will be a non factor. Except people who play dating simulators. They will never be considered cool. 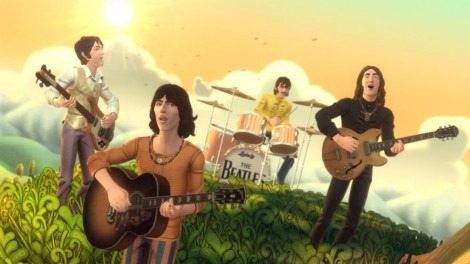 Getting parents to play video games since 2009.

I think Joey nailed it actually. It’s not cool, but it’s not shunned by the majority anymore. We also cannot bitch when game companies try and expand their market to casual gamers. We can bitch when Nintendo forgets about us completely and focuses all of their energy on casual gamers, but if they find the balance between their hardcore and casual base, it can only bring better games our way and continue to convert new gamers. Which in the end is all I really want, I want to talk about my memorable gaming moments in Uncharted 2 with as many people and with as much enthusiasm as I did when I first saw The Matrix.

There are certain sectors of the gaming population that have crossed over into the mainstream but it seems as if it’s definitely not cool yet. We don’t know if it ever will be. Cool seems like such a subjective descriptor that can’t beging to describe everyone. Not everyone can be James Dean but everyone can play video games.