Let me start by telling everyone that here at Horrible Night, we go all out for our readers, including risking life, limb and pets. Or… we do now that I have Fruit Ninja Kinect. After last night’s 2 hour session, my dog is pissed at me because I accidentally smacked him, I have Band-Aids on two of my fingers from my ceiling fan and, despite being in reasonably good shape, I’m sore. It should be pretty obvious, then, that I really enjoy the game. I think my fiancé enjoys it even more, and she’s only watched me play.

If you’re unfamiliar with the game, it’s a port of a smartphone game available for iOS, Android and Windows 7 Mobile in which a variety of fruit is launched onto the screen for you to cut in half by swiping your finger across the screen while attempting to combo as many fruit as possible while avoiding bombs and missing fruit. That’s it. It’s a simple, simple concept that was a moderately entertaining diversion on the small screen. Still, simple concepts have been screwed up before, and not only translating a smartphone game to a console but to Microsoft’s thus-far-unimpressive Kinect could have gone horribly, horribly wrong. It didn’t.

Yes, the controls are that good. They’re actually more responsive than Microsoft’s sui generis controls in the menus. Since this is a game that revolves around the controls working well, it was critical that Halfbrick got them right and they did. It probably would have been do-able to just have the sensor tracking your hands’ movements, but Halfbrick made the wise decision to have a shadow projected on the background reflecting your silhouette, which makes the control even smoother. I did notice some loss of tracking if I swung my arms really hard, but that wasn’t a regular occurrence. The interface between the Kinect and the game also seems to do a pretty good job of judging when you’re accelerating your hands fast enough to slash, as well, but, like with other Kinect games, ensuring you have plenty of (artificial, not sun) light is critical. Playing with the drapes even partially open or the lights dimmed pretty much ruined the experience. 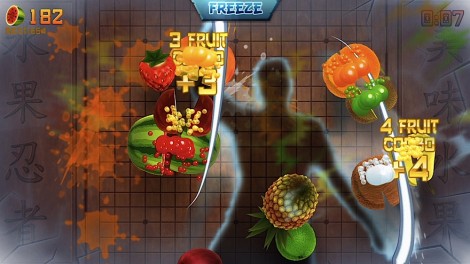 Stupid strawberries! I hate you, with your seeds and small size! You are my nemeses.

While simply porting the game and charging $10 for it (800 MS Points) would have been overly pricey for the content, Fruit Ninja Kinect includes enough separate game modes and challenges to make me feel comfortable about the outlay. In addition to the “Classic” mode (play as long as you can keep from dropping 3 fruit or hitting a bomb), there’s an “Arcade” mode that gives you a set limit of time, replaces the Holy Hand Grenades with 10-second penalties and throws in freeze, double-point and “frenzy” bananas (which are exactly what they sound like). It’s a nice change up from Classic, slightly less frustrating and always ends with a pomegranate, which takes as many hits as you can give it in a set period of time before exploding. If you have anyone watching, flailing away at the pomegranate is guaranteed to send them into fits of laughter. There’s also a “Zen” mode, which has no bombs of any kind and no bonuses and runs on a timer. On top of those modes, there’s a two-player side-by-side mode, which I haven’t gotten in to…yet. I’m slightly concerned about it, though, considering the damage I’ve already done to myself playing solo. Won’t that be a fun trip to the emergency room?

Doctor: Can you tell me what happened?

Me: Well, my fiancé and I were playing Fruit Ninja and…

Doctor: It’s okay. You’re in a safe place. You can tell me. Does she hit you?

Finally, and most importantly, there are the Challenges. The game will give you your own challenges to beat if you’re off line, but if you have friends (you have friends, don’t you?) who also have the game, your challenges will include beating their scores. While outscoring JDevL on Arcade mode was motivation enough, realizing that two grown men were standing in their living rooms, flailing away at the air while their avatars slashed flying fruit cracked me up.

Watch out for Fruit Pirates

If you’ve got a Kinect, I’d strongly recommend grabbing Fruit Ninja. The controls are done so well you finally get a glimpse of what the Kinect is capable of, it’s loads of fun (for the whole family – it’s rated “E”) and it’s much, much safer than trying to slash flying fruit with a sword in real life.