Before you even begin tossing zombie obsession allegations at me, let me be the first to say this isn’t a zombie game, or at least not in the conventional sense (and yes, I am zombie obsessed, but that doesn’t mean I can’t be somewhat objective). Yes, there are zombies and they do function in familiar ways. However, Space Pirates and Zombies is a game about space and thus the zombies fly around in spaceships, but the focus isn’t entirely on the zombies, I swear.

The future is toxic

If title length was not an issue, the title of this game would probably be SPCMAZ to include the other two factions integral to the plot of the game, civilian colonists and the military group known as the UTA. In SPAZ, you’re tasked with assembling a fleet, navigating the stars and intermingling with these factions in order to become the top tier space pirate you’ve always dreamed of being. Sounds simple right? At first perhaps, but under the surface of what some may interpret as a casual top down space action/RTS is actually a fairly deep RPG with aspirations that make the fact that two guys made it seem unbelievable. 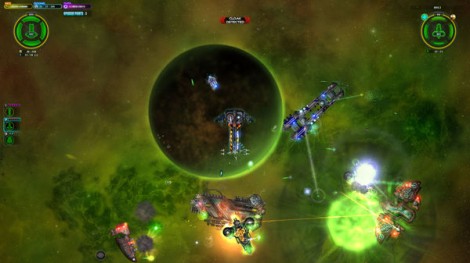 People really like thinking green, but not that green

At the beginning of the game an explosion rocks your immense space vessel and your crew, comprised of some witty characters that seem a bit emotionally distant, must cruise around space and retrieve certain resources in order to continue their mission of space pirate supremacy. From the prologue, I was able to gather that Earth is screwed and man has moved into space as a means of survival, discovering riches beyond their wildest imagination the further into space they get. Your goal is to find these riches, which lie in the middle of a large star system. However, like most RPGs, you can’t possibly make it to the more dangerous central area without upgrading your craft and leveling up your fleet, which is accomplished by completing missions for the UTA or colonists as well as by collecting “data” from destroyed enemy vessels.

The overlying star map consists of hundreds of little galaxies, which themselves act as mission hubs and your means of interacting with the factions. While here, you can buy supplies, choose missions and just chill like a villain, which you kind of are unless you’re one of those Robin Hood like pirates, which you shouldn’t be, unless of course it’s the Kevin Costner version of Robin Hood, which is completely legit.

Mission structure is simple, consisting mostly of things like eliminating enemy ships, escorting supply carriers or clearing trash (aka explosive barrels as trash men have a dangerous job in the future) from space. The underlying faction system stands in your way of taking on every little assignment that comes across your desk, giving the game an element of diplomatic strategy that spices up the package. Not that the system is complicated by any means, essentially it boils down to doing bad things against a faction makes them dislike you and doing good things, will makes them happy. It’s pretty easy to mess with the UTA for awhile and then bolster your rep by helping them out or doing missions. The game ominously advertises unseen consequences to these interactions so caution seems to be in order. Then I remember that I’m a freaking space pirate and take another sip of my cosmic ale and continue trucking through space without a care in the world. In addition to the faction based missions, there are also casual events that pop up now and again and allow you to mine asteroids for “Rez” (one of the games resources as well as its main currency) giving the game an economically focused change of pace from the intergalactic battles that will take up most of your time.

Design your little heart away!

Upgrades are essential if you want to survive

These battles start way before you turn your phasers to kill and jet into the thick of things though, as planning and equipping your ship is a huge part of the equation. Your main vessel starts out with a couple hangers where ships can be built for battle. The hanger is where all the customization begins, as you’ll have a choice between different hulls, weapons and support systems that affect different ship attributes such as cargo capacity, speed and destructive power. Each hull has its own particular advantage in specific scenarios, so you won’t necessarily stick with the same design throughout your play. Some ships are better for battle and some more adept at harvesting resources, however the game does give you an idea of what sort of mission you’re getting into beforehand and allows you to make ship changes during the course of battle. You’ll never be stuck with something that is incapable of completing the assigned objectives. This customization is quick and pretty easy to figure out once you’ve played for a bit, but making sure you have enough Rez is very important as building and refitting ships ain’t free.

As your level increases, you unlock additional hangers that also increase in size, making way for some pretty intimidating battle cruisers down the road. This is probably the best part of SPAZ as watching your once pathetic fleet grow in size and power is satisfying and worth the sometimes monotonous mission design. In addition to that, you’re also able to place points gained from level increases into different research, which affects things like missile damage, stealth capability and power levels.

Kick the tires and Light the fires

Once all the party planning is done, it’s time to fly and SPAZ transitions from the relatively deep planning stage to a very approachable combat mechanic with a couple interesting twists. You take direct control of one ship of your choosing, using the mouse to aim and WASD to move, with X acting as a stabilizer since you move in a fashion similar to Asteroid. The AI takes on the rest of your ships, but at anytime during the battle you can switch between your fleet by pressing the number keys as well as adjusting AI protocol or ship customization by pressing the space bar to open up your menu. This gives you an opportunity to take a breather, rethink your strategy or even call a mass retreat from the system you happen to be battling in. 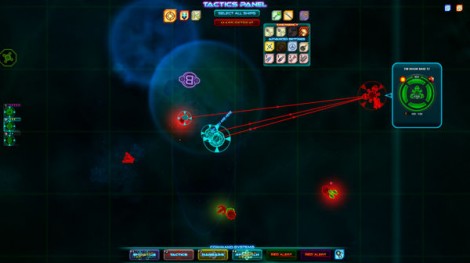 It's not all lasers and missile volleys, you have to use your head a bit too

Combat is uniquely handled in the sense that every ship has multiple layers of protection that are weak against certain types of attacks. For example, energy shields are weak against lasers while armor plating and hulls require the use of missiles to cause any sort of damage. This requires careful planning and ship placement is essential as the action mechanic you think is straight forward turns out to require a bit more thought at later levels. I tended to attack energy shields with a ship equipped with double lasers, then switched to a missile firing vessels once the hull was exposed. The AI does a great job of following suit, often times packing the one two punch necessary for enemy destruction without me having to do anything. Once enemies are destroyed, they release Rez, Data (which is used to level up), Escape Pods (which are used to increase your crew size) and blue prints that give you access to different hull types.

Who your enemies are is based entirely on your standing with the factions and what sort of mission you’re taking on, which sometimes means attacking ships that don’t necessarily attack back as they may trust you based on previous encounters. This is kind of a cool little touch, but it has a disadvantage as it’s also possible to accidentally shoot allies during the course of battle, which could hurt your relations in the future. This tended to be more of a problem after I gained power and an errant volley of missiles took out a civilian vessel in one hit. Whoops.

So I wouldn’t be able to get away without mentioning the zombies and how they work. Before they make their presence known, you’ll hear transmissions from other ships broadcasting in reference to desolate vessels floating through space seemingly crew-less and covered in biological residue (by the way, this is a subtle but incredible touch that adds a ton of atmosphere). Zombie don’t exist to so much attack you as they are there to infect (similar to the way that the Zerg infect Terran technology in Starcraft). I didn’t have a ton of interaction with them during my time with SPAZ, but the idea is very unique and goes to show that zombies are relentless as hell. Let’s just hope they don’t figure out Twitter or we’re screwed. 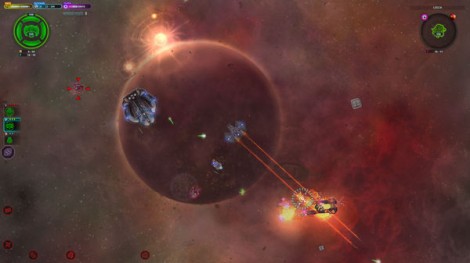 In space no one can hear you moan...

The game is huge and while I’d love to give it a score now, I have yet to experience all it has to offer. MinMax games definitely knows how to put together a rich, truly addicting experience and with plans to support the game after release (which is bittersweet as I already have a feeling the game just stalled my plan to finish my library sometime in the next few years). Space Pirates and Zombies looks to be another contender in the sea of exciting indie games that one could literally play forever.