With the economy in a tailspin, I was forced to turn to the life of a mercenary, a treasure hunter for hire. Not exactly glamorous, and definitely life threatening, but at least I get to travel and I had the opportunity to learn the lessons of Borderlands.

The Lessons of Borderlands 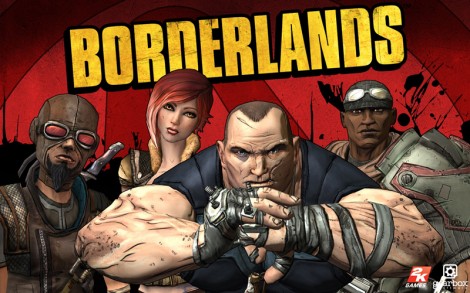 Why would you use your fist when there are so many guns?!

Leave the rookies behind

I learned something today. I don’t usually take solo missions, and after arriving on Pandora I really could have used a running crew. The planet is pretty much a desert wasteland and it should not be handled on foot. It was slow going those first few days while I got to know who had jobs for me and the weaknesses of the local wildlife and psychos. Even a hardened mercenary like myself gets a bit lonely out here, but I’ll tell you what, I’m happy to handle business alone if my only option is to work with inexperienced mooches. I was just about to head to the next major town when I saw some new mercs roll into town. I figured they could take a bit of the pressure off, so I joined up. Unfortunately, all they did was drag me down. They wanted to do the exact same jobs I had just completed. I didn’t have time for that so I brought them along to my next task. That was a big mistake. These wimps couldn’t scratch any of the grunts that were attacking us. I had to take them all down myself, except now I had to share the rewards. No help, but they wanted my gear, “To save for later” they said. So I showed them to a particularly nasty psycho camp and let them “draw fire” for me when my gun “locked up” and I couldn’t “save them in time.” Thanks, Borderlands.

I learned something today. The human inhabitants of Pandora are strange enough, so I shouldn’t have been surprised when the robot inhabitants turned out to have all of their screws loose. I’ll hand it to claptraps, they want to be helpful and sometimes I’d rather deal with them than that Dr. Zed guy but at least the doctor leaves me alone with I’m done with my business. The claptraps, on the other hand, always want your attention. Look away for a second and they are yelling at you like they just received life and death information that you need immediately. At first, I thought it was just a malfunctioning bot that inhabited Firestone, but every single one of these things wants to show you their dance moves. It’s too bad I couldn’t convince any of them to join me on one of my jobs. They could have been just as handy as those rookies that I used as shields. I can’t wait until the whole Pandora economy is replaced with vending machines or at least that hot Moxxi chick. Thanks, Borderlands. 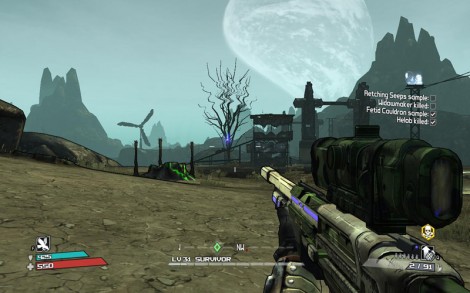 You should see my collection.

You can’t have all of the guns

I learned something today. If you love guns, come to Pandora. If you come to Pandora the way I did, steal Roman’s bus. You’ll need the space. Not only do the outlaws carry gun combinations you have never seen before, but the animals are known to have a few on them as well. Rocket shooting pistols. Sidewinding shotguns. Ice machineguns that regenerate bullets. God damn I wanted to collect every single kind. Unfortunately, it is about impossible to carry more than four guns at once, at least in any useful way. I had to leave a lot of explosive possibilities in the dirt just because I had fallen in love with what I already had. You could make a living just from selling your collection out here. I don’t even know why I kept taking on jobs when selling guns was making me rich. Imagine how pissed off I was when, after I had cashed out more than a few guns that I had become sentimentally attached to, Pandora suddenly opened gun lockers to the public. Son of a bitch. Now, I have to go find that sniper rifle with the spread barrel all over again. Thanks, Borderlands.

The bigger they are, the more bullets you’ll need

I learned something today. I’ve fought my share of big baddies capable of squashing me with their toe nail. The trick is to know where to shoot them and to make it count. A few shots in the sweet spot will send them running, screaming, or dying. Then there’s Pandora. Maybe it’s just an evolutionary reaction to the ridiculous amount of ammunition on this planet, but some of these big bastards can take a beating. Not only that, but they show no weakness no matter where you hit them. Whether it is a perfectly placed bullet to the taint or cannonball to the chest, no creature ever lets on to which one hurts more. Sure, some enemies are more susceptible to the elements than others, but for the really big ones, I eventually just stopped strategizing and aiming all together. Why overthink it when lining up shots over and over again takes just as much time as emptying every clip you own into their hides? You can always get more ammo. So when in doubt, just empty the clip. Thanks, Borderlands. 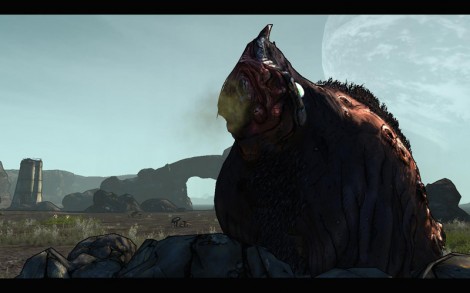 Spend that money on something

I learned something today. After a lengthy assignment on Pandora, I found myself quite rich. This was even before I hit the vault itself. A little over halfway into my trip, I literally couldn’t carry any more money. Not a problem I usually complain about except that there is absolutely nothing worth buying on Pandora. Especially when you find the best guns out in the middle of nowhere. The lust for guns carried me to the point where I had forgotten why I came to Pandora in the first place. The planet is populated with scarce towns occupied by shopkeepers and taskmasters that only trade in goods used in gunfights. When you have full pockets and your original goal was to get more money, you start to question the purpose behind putting your life on the line for more of what you already have too much of. I’ve been on Pandora so long at this point, I don’t even remember what other planets have to offer. I just hope they take Pandoran credits and that there is something worth buying off planet because I sure as hell don’t want to live here with these losers. Thanks, Borderlands.

Am I rich? I mean, I have a lot of stuff and a lot of “money” that’s usable on at least one planet. The problem is I want nothing to do with that dirty battleground, except for the guns. I love the guns. But you know who doesn’t love guns? Customs and airport security. What a worthless trip. Thanks, video games.

4 Comments → I Learned Something Today: Borderlands