Meanwhile… we’ve actually been playing games. Each week we recap our recent gaming experiences and tell you what we’re looking forward to, so you can use your time more wisely than we have. Finally, we get to fly the doghouse this week. We’re hoping that aerial combat, modern warfare, and powered-up racing will lure some of our friends out from the Wild West, but I don’t like our chances. 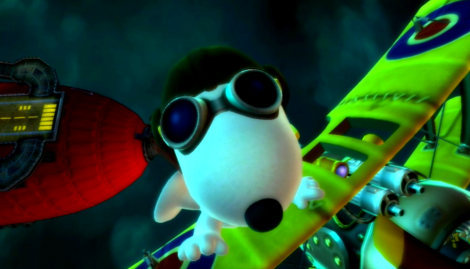 JDevL
Lots of racing for me this week as I’ve had my feel of story after finishing Alan Wake, so I’m gonna dumb things down a bit and just go for the primal fix of speed and chaos. I’ll be playing a helluva lot of Blur multiplayer, and thanks to the $40 sale on Best Buy and Amazon this week I picked up Split/Second in all i’s one dimensional gameplay glory. It promises to be memorable while it lasts though. If I get tired of racing, I’m going to pick up a few more stars in Super Mario Galaxy and shoot down BlueAwesome in Snoopy Flying Ace.

jmgist
I’m still hilt-deep in Red Dead Redemption this week…I just finished up my Mexican shenanigans, so I anticipate finishing it in the next few days. That is, if I ever find any godforsaken raccoons. I swear, I was up to my neck in them, like Shatner covered with Tribbles, until I actually unlocked the challenge that involved killing them…now I see them as often as Haley’s Comet. Here’s a great little anecdote about this game: My dad happens to see me playing it, plops down to take a gander…doesn’t get up for an hour and a half. He’s probably as into Westerns as I am, so he was grinning ear to ear as I demonstrated the ample awesomeness to him. I think he got the biggest kick out of Marston getting shitfaced and faceplanting into the street outside the Armadillo saloon.

Pixelmixer
I will be on vacation for the next two weeks, which means no console gaming for me. I do have my iPod, and will be playing some mobile games while I’m not doing vacationy stuff. The game I’m playing right now is Fly Kiwi Fly (iTunes link). Given the nature of mobile games, chances are I’ll be playing a large amount of games in many different genres.

BlueAwesome
I’m giving myself a little bit of a break from Read Dead Redemption this week. GameFly delivered a title I missed when it was released, X-Men Origins: Wolverine, and it’s been a fun, bloody diversion. Also, Snoopy Flying Ace comes out on XBLA, and I will be downloading that as soon as I get a chance.

Colefacekilla
Once again it’s been a Red Dead Redemption week for me. I’m enjoying doing the little things I never used to do in any Grand Theft Auto games. It’s keeping me fresh so I don’t suffer from mission fatigue. What a great game.

EndlessBen
I told myself that I was going to take a gaming break after the grueling 80 odd hours I put in on the two Mass Effect games but after a couple of days, I’m already getting the itch again, so this week I think I’ll try to find a copy of Alan Wake or Blur satiate my cravings.

Jadetiger CG
This week I going to attempt to hit lvl 60 on Modern Warfare 2. I love this multilayer because its fast, easy to level up, and lots to unlock. This week I’ll be attempting to complete the goal of sticking 5 grenades to people, and sticking a team mate with one. Team mate won’t take any damage and they can run in to take out the opposition.