I have to come out of the gates with a confession: Crysis 2 was not on my radar until launch week, but I am very pleased that this game flew into my airspace. I know that this year is back-loaded with a lot of triple-A shooters, but this military-based sci-fi shooter should be in any discussion around FPS of the Year.

Destruction can be gorgeous

It should come as no surprise at what feature immediately leaps out about Crysis 2. Allow me to paraphrase Derek Zoolander: This game is really, really good looking. No other shooter released (so far) this year looks this good. The visuals are so striking that I found myself gazing at helicopters as they flew overhead, crashing out of control into a skyscraper or watching the sun’s reflection off of New York Harbor. If you need an example of “massive destruction,” the game is full of occasions where buildings fall or bridges collapse. This destruction creates a chaotic environment that adds to the feel of realistic turmoil within the playable environments and Crytek never shies away from destroying notable areas of New York. Watching FDR Drive crumble into concrete dust and rubble is one of the many breathtaking visual displays early in the game. 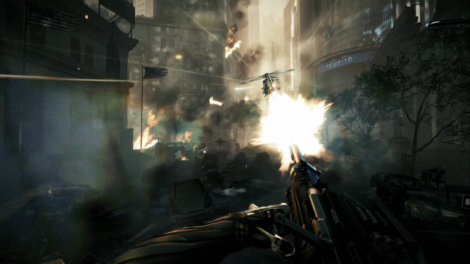 It's a beautiful disaster.

The use of light is incredible: when you’re roaming New York during the day, you know damned well it is day time. Shadows lean off of buildings the way and reflect into large office buildings perfectly. Crysis 2 also allows you to use the shadows to your advantage as you sneak around the map. This fantastic use of lighting allows you to fully immerse yourself into the game. Fighting at night is also a totally different animal from other shooters. The CryEngine 3 does a great job of altering the visibility during dark engagements while keeping the draw distance consistent. Following enemies from across the map in the dark is difficult (as it should be), but because it’s dark, not because the graphics technology can’t handle it. Crytek’s mastery of visuals in this game makes the city of New York a character in itself. Power outages and the crumbling city will alter both your mission path and your ability to track your enemies. I have to admit: I love it when a recognizable location becomes one of the game’s characters. It adds to the mystique of the game and, in today’s crowded FPS genre, a well-done and recognizable environment is a rare and welcome thing.

Don't mess with the suit.

You play as Alcatraz (a Force Recon Marine) who ends up near death in a warehouse near Battery Park after his squad’s insertion submarine is sunk in the harbor by forces unknown. Through a nice tie back to the original Crysis story, you find your rapidly expiring life saved by a nano suit. Anyway, it really doesn’t really matter who held the suit or is wearing the suit…because the suit itself is the main character in the game. The nano suit allows you to jump higher, run faster, create a thick skin of armor or cloak into a stealth mode. A key strategy to the game is learning when to go in and out of cloak or armor.

As you move through New York, you will find yourself in positions prior to entering combat where you can look over a combat zone and your suit’s AI will inform you that there are tactical options for your inspection. By pulling up your visor, you’re given a summary of your options and their distance from you. In addition, you’re able to persistently mark enemies, tactical objectives, and ammo: when you turn off the visor, any item or enemy you have marked will stay marked on screen with an unobtrusive floating triangle. From there, you can plan your approach, whether that be to go in guns blazing or to take a more tactical option. These look-before-you-leap situations happen throughout Crysis 2, and more often than not, you need to use your head vs using brute force. A run and gun approach in this game will leave you dead very quickly.

Although I occasionally ran into enemies that had momentary lapses of intelligence and spun in confused circles, this was a rare event. Generally the AI was anything but brain-dead. I spent more time triggering alarms (and consequently having to hide out for a minute) due to botched stealth attempts than I did hosing down dumb enemies who seemingly ate a lot of paint chips while they were concept sketches. Your augmented-reality visor doesn’t just give you a tactical overlay, it also has a function called “nano-vision” used similarly to night vision, which is necessary for the many dusty and dark encounters you face. These tools, along with thoughtful use of your suit’s stealth and armor abilities are a requirement, not an option, in completeing the game’s tactics-heavy gameplay. 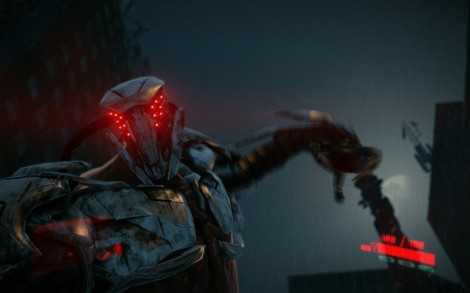 I demand shooter of the year nominations!

While introducing a bit of thinking-man’s shooter wouldn’t make Crysis 2 stand out on its own, the verticality of the environment is what gives the game its edge. Vertical options abound for sniping and/or sneaking up on your prey. Climbing up towers and buildings to snipe enemies before progressing to the other side of the map never got old. Sniping while cloaked was even more satisfying. Watching my enemies look around in confusion and panic was a refreshing change from the standard FPS formula of battling endless waves of enemies. In Crysis 2, it is very common to work your way from one enemy blockade to the next while minimizing your detection. Often your only first option is to hide your approach from the enemy before you can work your way through the area. The level design and artistic style of Crysis 2 is very different from the many shooters on the market right now and learning how to sneak around and use the terrain to your advantage is well-execute making it a fresh and enjoyable approach to the FPS genre. It is also worth noting that Crysis 2 isn’t limited to just tactical gameplay as it does a great job of appealing to many types of FPS players. The suit’s powers allow you to employ a variety of tactics to suit your style.

I was looking for something different from the FPS genre and Crytek totally delivered for me with Crysis 2. This is one of the best looking games I have played this year and it provides a fun experience for both the solo gamer and for the multiplayer fan. I have nothing but praise for the game and I would strongly suggest FPS fans and action fans strap on the nano-suit.