Sometime I would like to just go on a camping trip without anything but great camping happening. I know that’s a stretch because there is always something that can go wrong when off road vehicles and tents are concerned. Bears are scary, but so are extremist left wing groups wanting to liberate America. Even though this last camping trip wasn’t full of great camping, I did learn how to overthrow the Restoration, thanks to the lessons I learned in Shadow Complex.

The Lessons of Shadow Complex 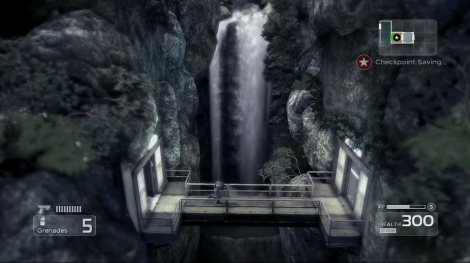 Don't let the tranquility of the waterfall confuse you.

I learned something today. I understand the lure of a busty female journalist as much as the next guy, but when they ask you to go camping with them, be suspicious. Your version of camping is going to be wildly different than her version. Yours involves a lack of clothing in a secluded outdoor environment, hers involves being kidnapped by Cobra looking dudes. Of course, she also expects you to save her. What is the deal with women always getting kidnapped and expecting us men to come and save them? Don’t be afraid to stand up on your own two feet, ladies. You aren’t just a tight ass and big bazoongas for us to ogle. We might have better things to do than save you. Too bad you already know that we are always there and prepared, like the Boy Scouts. Thanks, Shadow Complex.

Secret military complexes should be avoided

I learned something today. It’s not every day I come across a secret military complex, but when I do, I know how to handle myself. In the past, I would have simply turned and walked away, but not anymore. I mean, what could go wrong with breaking into an otherwise secure underground fortress? Besides having every person in the base trying to kill you, I don’t see the big issue here. The funny thing about secret military complexes: they always have cool weapons and armor lying around just waiting there to be collected. In fact, they even hide ammo upgrades in secret places. I’m not exactly sure why. Maybe it’s because certain doors can only be opened by that ammo and they don’t want any regular old Nolan to find it. Not to mention they tend to scatter their pieces of their most bad-ass technology throughout the base. Good plan to separate the suit, bad plan on keeping it protected. Even a guy just going out for a morning camping trip could become an elite supercommando with all that stuff. On second though, feel free to check out any secret military complexes that you come across. Thanks, Shadow Complex.

Everyone wants a foam gun

You can build bridges that you've burnt.

I learned something today. Do you ever find yourself in front of an enemy with nowhere to go? Do you need a bridge immediately? Well if you carried a trusty foam gun around with you, your problems will just melt away (after solidifying and solving your problem first of course). “Where do you find a foam gun?” you might ask. Remember that secret military complex? That place is full of em. “But I’m just a regular Joe, I’ve never been to a secret military complex before.” You sir, are out of luck. Look, I can’t hold your hand through all of this. There are some things you should just find on your own and I can’t just create a military complex in your neighborhood. However, if you want to come over I’ll show you how to use the foam gun. You know, in case you ever need a bridge or something. Thanks, Shadow Complex.

Jesus isn’t the only one who can walk on water

I learned something today. Actually, I learned something back in the day at Sunday School. There was this man named Jesus who walked on the surface of the Sea of Galilee. Impressive in his day, no doubt. But with the suit I obtained at the secret military complex, I too have walked on water. Now, I’m not saying I’m as good a human being as Jesus was or that I am the Son of God, if you believe in that sort of thing… but Jesus’ “miracles” aren’t as cracked up as they used to be. Just let me strap on my friction dampener and I’ll be running across the oceans, not just merely walking. Man created religion to explain the world. Man created science so he could laugh at those who still believed. Science made it possible for me to run on water without sinking. Advantage: science. Thanks, Shadow Complex. 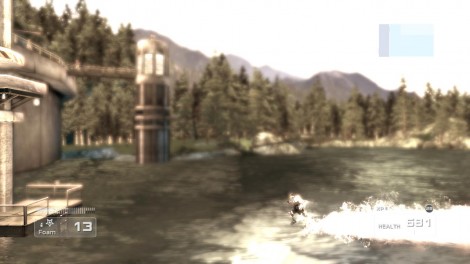 JC ain't got nothin on me!

We live in a free country. People are able to believe in what they want to believe. We can even start militias that are anti-government gun freaks who live in the woods of Michigan. And that’s okay. But when it comes to building secret military complexes on a piece of land where I was trying to get laid, there need to be some checks and balances. The real government has these in place, why can’t fake governments? The Restoration is a joke with a cool name and poor security. Instead of restoring the nation back to what it once was, how about we restore the nation back to the early 90’s. Bring back Hypercolor shirts. Science still hasn’t figured that one out yet. Thanks, video games.