I’ll admit it, I had my doubts that Captain America: Super Soldier would be able to overcome the negative reputation of set forth by most super hero games, let alone clear off the layer of filth that comes with seemingly all movie tie-in games. I’m happy to report that, by the end of my playthrough, I was pleasantly surprised with the experience, although my bar was pretty low and I was not exactly overwhelmed with greatness by any stretch of the imagination.

I’m not sure whether the events in the game run parallel to those of their silver screen counterparts, but the gist of this title’s plot is that Captain America has to punch some Nazis or else the world will explode (they’re actually called Hydra but they have similar Nazi intentions and accents). Fans of the Captain America mythos will probably recognize the villains and side-kicks present throughout the game, but they were entirely new to me, as my only experience with Captain America was seeing a drunken man dressed as him puking in an alley during a bar crawl in college.

I suspect that the real Captain America would never allow inebriation to get the best of him, seeing as he’s the result of a scientific experiment to create the perfect soldier. This allows our shielded hero to perform acrobatic stunts, punch robots with his bare hands and have a genuinely high level of self confidence when faced with odds that would make most men urinate in their pants. Captain America is a solid hero and anyone that loves apple pie and Toby Keith will surely be enthusiastic about this adventure, at least on the surface, anyway. Unfortunately, Captain America suffers from some pacing issues from the very beginning which takes the steam out of any momentum created by his entrance. After arriving out of nowhere to aid some American soldiers, Cap goes on a butt whupping spree filled with explosions and robotic bad guys. So far, so good. However, the very next scene has Cap slowly walking back and forth aboard a plane as part of a tutorial that appeared to demonstrate how to pick up the many collectibles dotted throughout the game. The tutorial’s appearance was abrupt, it took far too long and a seemed unnecessary, though I did find myself scanning for collectibles more than I probably would have normally (that’s behavioral manipulation, Next Level Games). 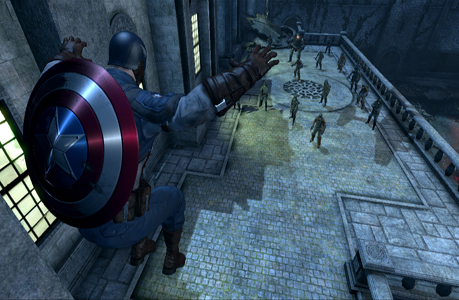 Do my super powers include falls from great heights?

The pacing issues are present throughout most of the game as Cap goes from objective to objective. The game is a mix of combat and platforming with a couple simple and rather unnecessary puzzles strewn about. The platforming is guided by quick time events and traversable objects highlighted with yellow markings. You’re rated on how well you time the jumps (which translates to upgrade points), but the controls are inconsistent and the hand holding becomes tiresome after a while. Two specific puzzles in particular wore out my patience. One puzzle requires that the player guide matching letters so that they overlap just to aid in the opening of doors, and the other, which is referred to as “hot wiring,” involves Cap pressing two wires together until he’s eventually electrocuted (You’d think he’d be more adept at this, but like a buffoon, he gets shocked every time. It was slightly funny after awhile). There’s really no sense of accomplishment with either of these tasks and they work against the flow of the game as opposed to aiding it in any way.

Combat is a high note in the game, as groups of enemies are dispatched with a combination of punches, flying kicks and grapple moves. Those familiar with Batman: Arkham Asylum will instantly recognize the control scheme, but it’s never quite as fluid as when the Dark Knight carries them out. Still, jumping around and thrashing enemies isn’t complicated and it looks like a carefully choreographed Hollywood fight scene.

In addition to standard moves, Cap can also hurl his shield at enemies and perform special movies when a meter above his health fills up. The special moves are key to dealing with certain enemies as they are more powerful, cannot be blocked and include such things as turning an enemy’s weapons against them and even super charging the Captain for a short session of invincibility. The shield is not just for blocking attacks, as it can also be aimed or double tapped to hit multiple enemies and is an integral tool in select environmental puzzles as well. Upgrade points are earned from fighting enemies and can be used to make Cap’s attacks even more powerful or for purchasing additional moves such as a shield smash that stuns groups of enemies. The game does do a pretty good job of making you feel powerful throughout Cap’s adventure in the Hydra fortress, but after a while it can start to feel as if the enemy’s AI is holding them back. Enemies seem hand picked to lose as they rarely attack in groups and even limit their gunfire to a shot every couple of seconds. The shots are fun to deflect back at the enemies, but again the flow of the action feels stunted. 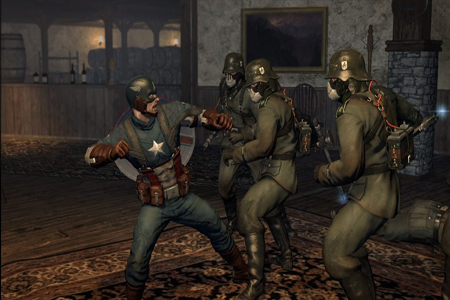 Some of the more powerful enemies make impressive entrances, but are easily taken down by spamming the “dramatic slow motion super move” that the Captain has access to when only one bar of his power meter fills up. There are a couple of boss battles mixed in and, while varied, they all can be completed pretty easily with the same strategy mentioned above (some can literally only be defeated with the power move). The pacing issue creeps back in during these encounters, as most bosses require a quick time event performed in order to defeat them with failed attempts leading to their health being restored a bit. Additionally, boss characters may look vulnerable for attack at times, but that doesn’t mean you’ll actually be able to cause them damage. Each seems to have a very restricted window of opportunity for attack and doing so outside of that window tends to trigger an unavoidable counter attack that can do significant damage. While patterns in boss fights aren’t uncommon, there’s really no indication in these battles when the prime time to strike happens to be. Finally, you’re also required to fight bosses multiple times which makes the already long and relatively boring battles even more so. There’s just plenty of oppurtunity to take advantage of these over-the-top characters, yet they function as if they are being checked off of the Captain America inventory rather than being integrated into the story and given some gravity or importance.

Cap is looking good, not great.

The graphics are solid, but not very diverse, especially in regards to the environment. The Hydra Castle is a huge location, but felt rather sterile, similar in the way games were before 2005. It was never fun to roam around the place in between action sequences and playing the game quickly became more of a chore than a pleasure. There is a sewer system introduced later in the game that was supposed to be used as a means of quickly navigating through the environment, but aside from maybe two back-tracking requirements, it seemed like a waste of resources. I’m sure gluttons for punishment may be able to utilize the system for locating all the collectibles (if you’re into that kind of thing) but those individuals either have OCD or only own one game and need to make the experience last.

Character models look OK but appear to be missing a few animations during certain sequences, like when Cap loses his shield and then has it magically appear on his back after somersaulting over it. The normal characters with exposed faces are even scarier than the bad guys with the intentionally scary masks, as their eyes are lifeless and their mouths move like those of ventriloquist dummies. These little problems are scattered throughout the game and add up by the end to detract from the overall game experience. 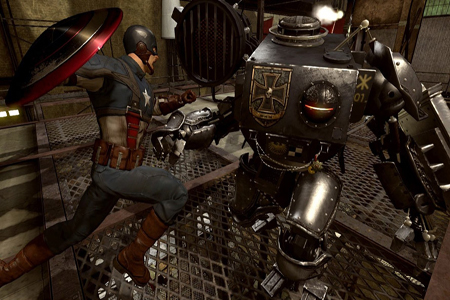 Compared to other movie-to-game and superhero game translation attempts, Next Level Games was actually successful with bringing a decent movie-based game to players. I can’t let Captain America: Super Solider off the hook though, just because its competition sucked. The game is short, lacks polish and passion and its one good component (fighting) is a watered down version of another game. The collectibles, side tasks (such as destroying AA guns) and challenge rooms add a bit of replayability to the game, but nothing that’s all that rewarding or worth revisiting (unless you like unlockables like diaries and pictures). While playable, it’s just not a whole lot of fun and unless you’re a Captain America fan and I can’t recommend it at full price. Personally, I’d like to see tie-ins like this released for budget pricing or even XBLA/PSN pricing. What I can recommend, since I hear the movie is pretty good, is to go watch it and then come back and play the much more affordable Arkham Asylum so you can play as a superhero that takes his daily tasks a bit more seriously.