Even though I wasn’t a fan of the game strictly because of Baby Mario’s annoying crying, having a nursery decked out in all things Yoshi’s Island is pretty damn cool. I don’t know who the parents are, but I’d like to nominate them for coolest parents of all time. Just having the artwork on the wall is cool enough, but these parents went all out. Imagine falling asleep to a Lakitu holding Yoshi mobile. Incorporating the Lakitu was a damn clever idea. Plus, having music from the game as the soundtrack for the kid’s sleeping habits in his/her formative years, can only lead to mastery of video games as the child grows up. There are studies out there that show that having a child listen to classical music in the womb and as a baby leads to them being smarter or something. Imagine what world problems could be solved by listening to a chip tune soundtrack? 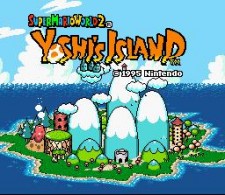 Great idea for a baby's room!

Some of the Cursed have kids on the way real soon and this Yoshi’s Island room might inspire some of them to create their own little video game themed nursery. That is, if they can talk their wives into it.

1 Comment → How Cute is this Yoshi’s Island Themed Nursery?