Ever since Supergiant Games started demoing coverage of the creation of their new game Bastion, I was hooked. It was a game that I couldn’t wait to get my hands on and knowing that I would have to wait until Summer 2011 to play it was almost excruciating. That being said, whenever I get that excited about a game I have to steel myself for disappointment. Often times a game can never live up to the standard I have created for it in my head. This time however, Bastion far exceeded anything I expected.

The Bastion wakes up

Bastion is hard to classify as anything but a hybrid. A singular hero waking up at the start of a game to begin his adventure, collecting weapons, while defeating the enemy along the way sounds familiar enough.  There are some RPG elements there, but it is very accessible and not overwhelming to people new to the genre. While the quest might not be as long as some full releases out there, it’s no less of a game because of that. Bastion places you in the role of the Kid, seemingly the sole survivor of the Calamity that has destroyed his country of Caelondia. Well, it hasn’t destroyed the land. More like broken it up into floating islands. Each of those islands has a collectible that will help the Kid restore the Bastion, a safe haven where you can build buildings that will help you on your quest. Those buildings provide the ability to change the way the game is played. Whether it be the distillery or the arsenal, the different load outs you can choose from each building can alter your experience in the game. 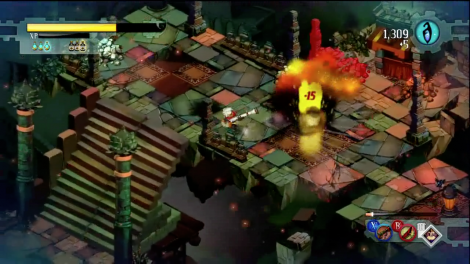 Yes, there is a Boomstick.

Bastion‘s gameplay is set on an isometric plane where the control is tighter than I expected. Before getting hands on, I was worried that I would be falling off the edges all of the time because I didn’t know how well the analog stick would be adapted to fit that world. Even though I did fall off the edge a number of times, it wasn’t due to the control. It was due to my ability to mash on the roll button at all sorts of inopportune moments causing the fall. When you aren’t falling off the edge of each island, you must contend with the different enemies that populate the broken Caelondia. Starting with Gasbags and Squirts and moving onto my favorite enemy name in the game, Anklegator, the variety of baddies make the game that much more compelling. Each enemy has a different method of attacking that keeps you on your toes always looking for the best way to defeat them. Whether it be reflecting projectiles off the Kid’s shield or using a variety of weapons the Kid picks up along the way, you’ll find yourself discovering what works best for you.

Load up the arsenal

There are a variety of weapons the Kid collects on the way. From the Scrap Musket that has shotgun like properties to the trusty Cael Hammer you pick up 20 seconds into the game, the Kid can carry two weapons at a time at any combination.  There are 12 total weapons in the game that you collect all of the way up until the end of the game (which is well worth the wait for the record). That’s the thing about the weapons in Bastion. After getting comfortable with a certain combination of weapons, the player will come across and collect a new one that is just as easy to fall in love with. New weapons change the way you play but you can always go back to your tried and true weapon combos if you desire. Most levels have an arsenal somewhere on the map that allows you to switch weapons mid-level, which is handy if you don’t like the new weapon you just picked up because it automatically takes the place of whatever class of weapon it is. If Supergiant hadn’t included the option to change mid-level, I could see this being frustrating but the weapons are all pretty good so it’s not an issue. 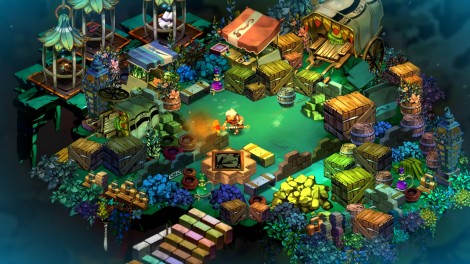 Don’t think your weapons are just static items either. Once you gain access to the forge, the Kid can upgrade each of the weapons with varying abilities. To be able to upgrade, you first need an item that corresponds with that particular weapon. These items are found throughout the different islands as well as the Proving Grounds levels that appear after a new weapon is acquired. Each Proving Ground is associated with a certain weapon. There are three prizes presented to you at the start of each level, and in order to win said prizes, you must finish the Proving Ground in a certain parameter. In the Breaker’s Bow Proving Ground, for example, you must destroy all of the targets with 5 shots or fewer. The third and second prizes are fairly easy to attain but the first prize can be quite the challenge. I have yet to get first prize on all the levels, yet I keep going back and trying. There was one particular Proving Ground where I spent 30 minutes in and still never got first prize. Frustrating? Yes, but they are also very compelling to those completionists out there.

Don’t talk to strangers. They’ll talk to you

I would be remiss if I didn’t mention the outstanding addition to gaming that Supergiant Games has created with their dynamic narration system. Usually the Narrator is a character who tells something at the beginning or end of the story. In Bastion, the narrator is talking through the entire game. Right from the intro where the Kid gets out of bed, and the narrator says “the Kid wakes up” the player can already feel they are in for an unfamiliar kind of storytelling. It’s a great way to start the game, obvious but compelling. But it isn’t always blatant like that first sentence. The Narrator conveys the story of Bastion as well as the history of Caelondia leading up to the Calamity. The writing is excellent, and I finished the game wanting to know more about the world. Without spoiling anything, the stuff you learn in each of the challenge rooms about certain details of the world was a great way to tell some backstory without bogging down the main story. It’s purely optional so if you want to know, you can. But if you just want to enjoy the main storyline you can just stay on the path. I recommend going into those challenge rooms, both for the story and for their tough difficulty level. 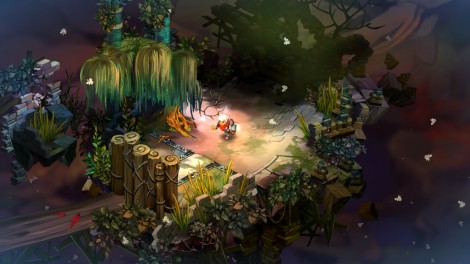 The Kid is determined.

No faults in a broken land

There are a lot more things I could and want to discuss, but I want people to experience them first hand. I haven’t even mentioned the art style, which is gorgeous. Upon seeing only the title screen for the first time, my wife (who isn’t a big gamer) said “Wow this game is beautiful.” The music is another absolute standout and people (including JDevL and myself) have been clamoring for a soundtrack to be released. There are also a couple of late game moments that I absolutely loved and wished I had more time with, but that is really the only complaint I can muster. The collecting of the monument pieces might seem like an old video game cliche but it works within the well crafted Bastion storyline. Supergiant Games has made a beautiful entry into the world of video games and I can’t wait to see what they have in store for us next.