There has been a recent trend in the gaming universe of releasing special editions of the game with collectibles contained within. These range anywhere from night-vision goggles (Modern Warfare 2) to Master Chief’s helmet styled game case (Halo 3). Both of those were released along side the game’s launch.

However, Rockstar has done something different with it’s recent huge success, Red Dead Redemption. At the Rockstar Warehouse you can buy some items that are frequently used in the game’s awesome mini-games. If you wanted to play some Liar’s Dice or Texas Hold’em with Red Dead branding now you can. 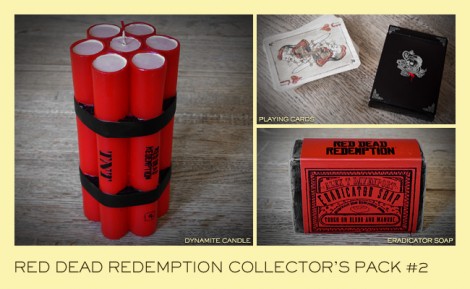 For the smelly gamer in all of us, they have also released a candle shaped like a bundle of dynamite and a bar of soap that is “tough on blood and manure.”

Check out the Rockstar Warehouse for these items, which by the way, are very reasonably priced.