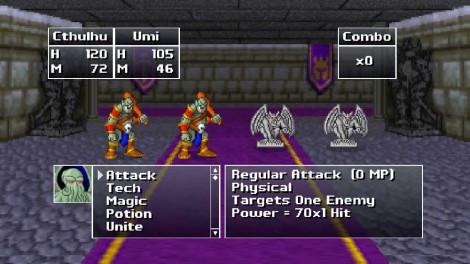 Seriously, we sound nuts but we're pretty sweet games. Just give us a chance.

Zeboyd, creators of Breath of Death VII and Cthulu Saves the World has been openly critical about the way indie games get exposure on the Xbox Live service, exposure that could lead to revenue for smaller studios such as their own. Those that think the developer is just upset because their game wasn’t as cool as they may have thought should look no further than the incredible thrashing the Xbox Live sales of both games took compared to the Steam release, which sold over 30,000 copies of a bundled package (that included both games) in only 6 days! Obviously they’re a competent couple of games.

Robert Boyd, apparently the Boyd in ZeBoyd (Bill Ze was not available for comment) went on to say that while the set up of the Xbox Live Marketplace is great for new developers trying to gain visibility for their games, it doesn’t translate to money for the developers that create a higher quality product (I hope to god Mr. Boyd isn’t referring to Baby Maker Extreme, there’s nothing more high quality than launching babies).

Right now, developers have a choice between Xbox Live Arcade (which features more prominent developers) and the Indie Games channel (which features everyone else). It may be beneficial for Microsoft to create a peer review system that could launch solid titles from the Indie Channel to XBLA, that way awesome games aren’t lost in the sea of crap that populates the Indie Games channel. My recommendation, buy Breath of Death VII and Cthulu Saves the World on both systems, just to confuse the numbers (it’s pretty darn cheap).