In our search for websites focused on gaming news and game culture, we have been on the lookout for other local up-and-coming blogs that share a passion for their hobbies much like we do at Horrible Night. Recently, we came across GEEKSOAP.net run by our new friend, Lesley, who makes a wide array of geek related crafts. We were particularly excited when we saw the game related soaps and that she is based in Indianapolis (just like us!), so we reached out to find out more. We had a ton of questions about GEEKSOAP™, and she was more than happy to tell her story. 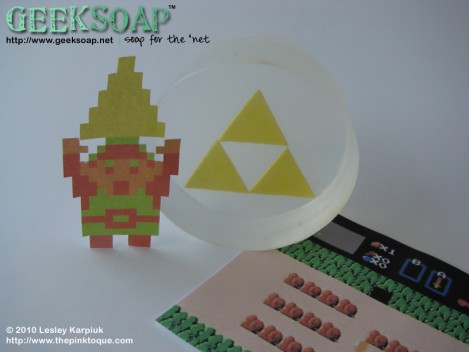 GEEKSOAP: Well, why not? I’ve been making things for as long as I can remember. I’m always trying new crafts or cooking up something handmade. Painting, scrapbooking, knit, crochet, soap, sewing, etc. I love it all! What I heart the most about soap is that I can create something in a fun flavor (like geek) and not only is the end product creative and fun to look at, it’s practical, too!

GS: I am a HUUUUUUUUUUUUGE geek. Like, seriously. I love sci fi, computers, gaming, and everything in between. I currently just finished up the school year where I taught Computer Applications at a middle school – I got to geek out at work and at home. It’s heaven. The creations I make represent my passions and my obsessions, and so geek was a natural subject for my soapy work.

HN: How long has GEEKSOAP™ been around?

GS: I’ve been formally selling my handmade goods since October 2006 on Etsy, but back then it was mostly sewing, knit, and crochet. GEEKSOAP™ has technically been around since May 2009 when I created my first Batman soap, though I didn’t start really selling geeky soap until later in 2009 on Etsy, alongside my knit and crochet creations. (Cthulhu knit and crochet creations to be exact.) When I started making more and more geeky soap and getting more and more interest in it in early 2010, I decided to officially separate my soap from my knit and crochet. Sometime in late January/early February 2010 is when I registered geeksoap.net and started promoting it as a separate entity. 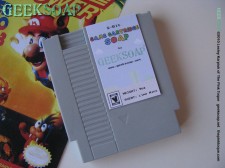 Remember to blow on it

HN: What is your most popular GEEKSOAP™?

GS: The most popular GEEKSOAP™ is a tie between my D20 Soap on a Rope and the 8-Bit Game Cartridge bars. Both are custom molds I created myself and have been featured all over the Internet!

HN: How do you choose what will be your next GEEKSOAP™?

GS: It’s hard to say exactly what will spark my next soap design, but usually the designs are inspired by something I’m doing or some geeky guilty pleasure I’m indulging in… like playing some old school Nintendo games or watching some of my favorite movies or TV shows.

HN: Which type of geek needs the most soap?

GS: I think the geek that needs soap the most is the gamer geek. As a gamer girl, I know that it’s hard sometimes to drag yourself away from the game to go bathe when you’re in the middle of some epic raid or up against an opponent. The movie geek or the comic book geek can put their geekery down and come back to it after a bath and it’ll still be there, but sometimes the gamer geek just can’t pause a raid or encounter with their peers.

HN: If you could only play one game for the rest of your life, which would it be?

GS: Hmmm… only one game for the rest of my life? Can I cheat a little and say the Mario series? I am a HUGE sucker for all of the Super Mario Bros. games!

GS: Hands down, the customers. They’re an infinite source of inspiration and encouragement that motivates me to keep creating and to make each bar of soap the very best that I can. Special thanks behind the scenes goes to my patient and supportive husband Lucas, and other soapers like @KyleeLane who has been a tremendous support to helping me perfect the craft and all of the little things that goes with it.

Visit Lesley’s booth at GenCon in Indianapolis this year from August 5-8.
Find out more on her homepage – http://www.thepinktoque.com/

3 Comments → Clean Up Your Gamer With GEEKSOAP