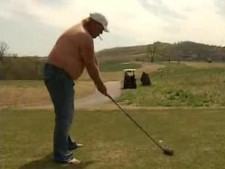 Looks like Tiger Woods PGA Tour 11 may have some competition for the first time in years, as John Daly is set to promote his new golf game John Daly’s ProStroke Golf at E3 this year. Maybe competition is a bit of a stretch, but there will be multiple golf games available for the PC, Xbox 360, and PS3 this fall.

So far no indication has been given that the game will sport any of “style and personality” of John Daly that makes him such an interesting PGA Legend, such as

John is taking the game seriously and goes right at Tiger in his statement: “For too long, the golfing genre has been dominated by one franchise, but with ProStroke Golf’s great game play, control and realism, that’s all about to change. I’ve had the time of my life gripping and ripping it on the PGA Tour, and now gamers everywhere can see what it’s like to step into the Lion’s Den and bomb it down the fairway.

Mr. Daly will be appearing at E3 this year to promote his game, something that the dominant franchise can’t say about their namesake. Best of luck to John and the game’s developer O-games, and here’s hoping they borrow a few ideas from South Park’s vision of what a golf game should include (NSFW).