It’s an awkward thing, writing for a video game website, expressing opinions and reviewing games with some level of competence and confidence and knowing, deep down in your soul, that you have never, ever, ever spent more than 20 hours playing a huge, influential segment of video games. It’s even more awkward when you realize that, to preserve your integrity and your readers’ trust in you, you have to come clean with them.

So, here it is, folks: the closest I’ve ever come to making an investment in the subcategory of gaming now known as Japanese Role Playing Games (JRPGs, coined to differentiate them from Western RPGs like Mass Effect, Knights of the Old Republic and The Elder Scrolls) is beating Sword of Vermillion for the Sega Genesis and putting in 5 or 6 hours into Kingdom Hearts (before deciding I really didn’t like it all that much.) That concludes my active relationship with Square Enix – I watched a pledge brother plow through Final Fantasy VII, requiring him to take a week “off” from class and I’ve seen The Spirits Within and Advent Children (which I mainly found confusing).  For some reason, the guys at Square Enix just set my teeth on edge.

It’s kind of embarrassing to admit this, because I’m not an illiterate meathead with the attention span of a goldfish. I love games with a lot of loot and inventory management (Diablo II, Borderlands and I was  little irritated about Mass Effect 2‘s removal of  customization options.) I don’t have trouble managing a lot of different tasks or party members (I love both real time and turn-based strategy games including Axis and Allies, the table-top version.) I don’t have trouble following in depth story lines with multiple branches. Once upon a time, I even played the old pen-and-paper granddaddy of them all, Dungeons and Dragons, so I’m not averse to dice-roll based damages, buffs, resistances and attributes.

How can I call myself a gamer without ever having spent hundreds of hours immersed in a critically important part of the fiber of the game universe? What is it that’s kept me away from knowing Cloud’s back-story? 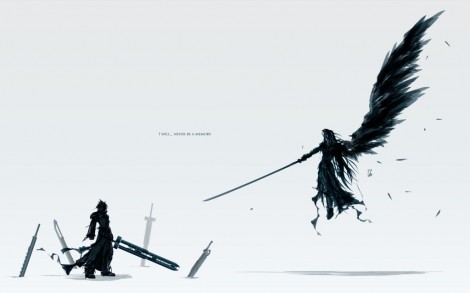 I don't care how big your sword is, I can't take you seriously with that much product in your hair.

Coming up with this confession required a little bit of thought and analysis to figure out how it was that, over 25 years of gaming, I’ve never been tempted to really get into the genre, especially considering my love of science fiction and fantasy epics. At the end of the day, I think it’s about control. It’s not a neat explanation, as you’ll see, but it’s the closest thing to a real answer I can come up with. There are enough similarities between the sub-genres that I can see the draw (who doesn’t love the 2 L’s: loot and leveling?!) for others, but it just doesn’t do it for me.

Control seems to me to be the defining difference between JRPGs (as defined best by Square Enix) and WRPGs (best defined by Bethesda and BioWare.) Oh, sure, there are differences in the storylines due to mythological heritages and storytelling histories, but if I try to differentiate the two, I think that’s the key element: WRPGs let you have direct control and JRPGs do not. If my party gets into a battle, I want to be able to do something other than pick the action and let my character do the rest. I actually want to swing the sword, aim the gun or trigger the forcefield while circle-strafing the crap out of my opponent and leveling up for my skill.

Conversely, I think the fact that the WRPGs (which I’m defining somewhat liberally to include a spectrum ranging from very-RPG-ish games like Knights of the Old Republic to action-games-with-RPG-elements like Borderlands, Diablo II and even Rockstar Studios’ games) are built around direct action/control is what pulls me in. Even the turn-based KotOR put the action pretty front-and-center with its on-screen interface allowing you to bypass going into menus. 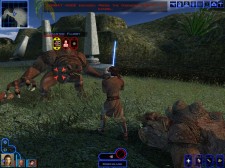 It's the interface that makes the difference.

This is where it gets messy

Unfortunately, even after really thinking about it, my theory’s still full of holes. While I don’t/never did have any interest in Mario RPG/Paper Mario, I really enjoy the Legend of Zelda games (which are, arguably, more action adventure than JRPG). I got a kick out of Quest 64, despite its undeniable heritage. Sitting around watching my minions do my fighting in Civ V or Warcraft 2 doesn’t bother me in the least, I disliked Fallout 3 even though I love questing, grinding, talking to random people and completing hundreds of random sidequests.

Regardless, my confession stands: it doesn’t matter if it’s Final Fantasy, Kingdom Hearts, or Star Ocean, if it’s a traditional JRPG and/or from Square Enix? I haven’t played it and I’m not gonna’.