Back when my wife and I lived in California, we would come to Indiana about once a year to visit with family and friends. Usually that meant going to Justin Lacey’s, of gamertag JDevL fame, where after carousing at the local watering holes we would come back to his residence and play video games. It was last fall where I was first introduced to Splosion Man. I had read about the game but never actually played it. And that trend of not actually playing it would continue because my wife was hogging the controller. Except when a part got “too hard,” then my video game mastery would come in to play and I helped her get past the tough spot. Once a game gets the wife’s seal of approval, it’s usually an immediate purchase. That wasn’t the case this time, but right around the holidays I finally bought Splosion Man. I played it for awhile, but then more important life matters got in the way, like moving back to Indiana, and, to be honest, I forgot I even owned it. It wasn’t until Ms. Splosion Man was released last week that it dawned on me that I had yet to finish the first game in the Splosion series and got right back to the action. 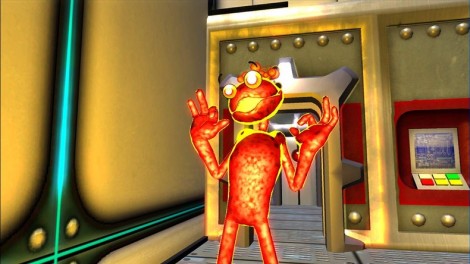 Let off some steam, scientists.

Splosion Man is a 2D puzzle platformer which puts you into the radioactive body of its titular character. After a horrible lab experiment gone awry, Splosion Man is created. He is a molten lava being capable of using his abilty to “splode” to propel himself through the air.  This is the only gameplay mechanic in the game. You can splode up to three times in a row before Splosion Man is drained of his energy. After that you need to find a surface, whether it be a wall or the ground, to recharge. Once fully charged, the ability to splode returns. Every face button on the Xbox 360 controller is capable of this action and this action alone. The barrier of entry is almost nonexistent but the challenge rises as you dive further into the game.

If you have been looking for a game that harkens back to the difficult 2D side scrolling games of old (and have already played Super Meat Boy), then Splosion Man is what you are looking for. With many modern games, people who once played video games but haven’t played since the Super Nintendo are often extremely intimidated. In the case of my wife, she doesn’t like games in a 3D world. She gets lost and can’t follow the action very well. But put her in front of a game like Splosion Man and she’ll be cackling along with the most jaded of us video gamers. That’s the awesome thing about this game. It plays to both sides of video game fans. The casual gamers can pick it up and be successful fairly quickly without getting mired in difficult controls. The hardcore gamers can appreciate the ramp in difficulty as you go along, as well as trying to find all the hidden cakes in each level. Splosion Man gives both sides of the gaming world something to appreciate, not even mentioning the fact that the game is hilarious. Look, I grew up watching and enjoying cheesy Arnold Schwarzenegger movies. I might have even been part of a group of guys who tried to count how many people John Matrix ended up killing in Commando. For Splosion Man to reference so many of the former governor’s films was right up my alley.

I’ve been playing for the past week or so and regret ever putting Splosion Man down in the first place. I shouldn’t be surprised by the fact that it happened, because it is definitely a habit of mine. I actually wanted to start the game over from the beginning to regain the skills I lost. That didn’t happen because I couldn’t find a way to reset my progress so I jumped back in from where I left off. Whatever I thought I might have lost came back quickly and I was sploding through the levels. I haven’t finished Splosion Man yet but I will, even if it means skipping a few levels (though I fully intend to go back and beat them…whatever that means).

If you haven’t played Splosion Man, stop reading this and go buy it (it’s only $10 bundled with Trials HD and Limbo at Best Buy this week). If you have been gaming since the late 80’s, you’ll appreciate the style and difficulty contained within. Even if your first taste of video games came in the form of something after the great Nintendo/Sega wars of the early 90’s, the humor alone is worth the price of admission.

1 Comment → Splosion Man Reflex Review: Splode Because You Can