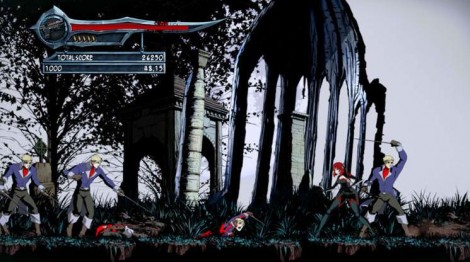 You seemed to have left yourself behind.

As a diehard Castlevania: Symphony of the Night fan, I’ve been disappointed with Konami’s choices concerning the series on the major consoles. Since I hold that game up to such a high standard, I know it’s hard for anything to reach my admittedly lofty expectations. However the new sidescrolling BloodRayne: Betrayal looks like it might slide in where Castlevania has since disappeared. I’m not very familiar with the BloodRayne game franchise so I don’t really have any expectations. The last game, BloodRayne 2 came out in 2004 to mediocre sales before the franchise was tarnished by the inimitable (in a bad way) Uwe Boll.

Majesco and WayForward Technologies look to reverse that stigma by taking Rayne and putting her in a 2D sidescrolling universe where she can slice and dice to her heart’s content. There will be 15 levels of vampiric action, featuring environmental puzzles as well as biting enemies and turning them into walking grenades. The art style WayForward has gone with looks amazing. Instead of trying to compete with a ton of other 3rd person 3D action games, WayForward has decided to live up to their name. BloodRayne: Betrayal is set for release on August 31, 2011. You can get it on the PlayStation Network and Xbox Live Arcade for $15 (1200 MS).