It is unfortunate that Shadows of the Damned looks so generic from the outside. Bad title, bland cover and when seen in stores, the only thing it screams is, “I fill out this shelf!” Only by staring a bit closer can you sense that this may be a different experience entirely. If the phrase “A Suda51 Trip” on the box, under the title doesn’t excite you, then keep reading and allow me to express why it should. For everyone else, just know this is the best true game that Suda51 has made, and your purchasing decision has already been made. 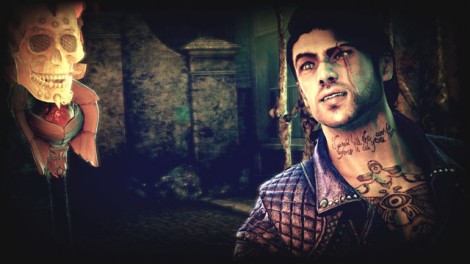 Shadows of the Damned is a demon hunting action game / road movie starring Garcia Hotspur. Garcia is as bad ass as his name and is off to the underworld to kill the demon lord that stole his girl. He is accompanied by his British, floating skull-demon pal, Johnson, who has the ability to transform into various upgradeable guns for Garcia to use in exact retribution from his evil foes. That’s as plain as it is going to get. In the intro, you are immediately introduced to the punk-rock-infused characters of creator Suda51’s world. The difference here is while Suda’s previous games have had excess style and lacked in substance, with Shadow of the Damned, he has addressed that side of the game develpoment puzzle by teaming up with Shinji Mikami. The introduction serves as a tutorial for the player to get used to basic movement, controls, and gunplay that, love it or hate it, is immediately reminiscent of Mikami’s Resident Evil 4. Me? I love it. Suda’s games don’t need a revolution of gameplay, they just need a solid foundation from which his crazy ideas can work from without breaking the experience. Shadows of the Damned has that foundation and that’s exactly what elevates it to being Suda’s first great game.

Even for fans who adjust to the over the shoulder aiming and the fact that each gun changes multiple times, the action does have one concerning weakness, repetition. The developers must have recognized early on that shooting would only carry them so far, and, in what turned out to be the most surprising discovery for me as a player (and the smartest design decision on their part), this game has variety to spare. Each action sequence has a fair checkpoint system and tends to be no more than 10 minutes long before breaking to a cut-scene or switching up the scenario. Shadows of the Damned is well paced all the way to the ending, where I felt, for the first time in a long while, that the ending came right where it needed to be. Not out of the blue and not drawn out.

Come into the light and say that.

The main mechanic that drives a lot of the variety is the use of darkness. Just as you get comfortable in a new area and start picking off enough enemies where it could get tedious, the darkness creeps in. Depending on the situation, the darkness can only be removed or escaped by hitting the appropriate trigger. Triggers can be goat heads, targets only vulnerable in darkness, fireworks that temporarily dispel the darkness, and a few other twists on those ideas. While in darkness, Garcia takes damage and enemies get stronger. All of the sudden, zombie target practice becomes an urgent puzzle that you have to solve before you die. While darkness is used throughout Shadows of the Damned, most encounters require a slightly different method on how you can get rid of it. This kept me on my toes and prevented me from just biding my time until the next cut-scene or until a bigger change-up came my way.

Damned’s handful of boss fights introduce demons that inhabit 3-4 stages. This gives the player a smaller goal to work toward while trekking toward the ultimate battle with Fleming, the Lord of Demons who is responsible for all of this. The bosses all have a backstory, which Garcia and Johnson discover through the form of individual books that they take turns reading (and adding their own commentary) to one another. This is Hell, after all, and these once-upon-a-time-human demons all have twisted tales. All of this serves well in adding a bit of weight to each of the boss battles, which otherwise would appear much more random than they are. The character of the bosses and the light puzzle solving you have to do to deduce their weak points make each boss battle stand on its own. They are never particularly hard and definitely could provide more feedback to the player as to when you are and are not doing damage, but whether it is the set piece itself or Garcia’s trash talking, they are memorable and a blast to play through. 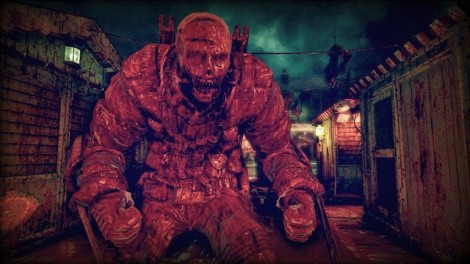 You do know that you are covered in blood, right?

Scattered throughout Shadows of the Damned are smaller distractions like the interactions with a redneck, half-demon shopkeeper named Christopher, tense chase scenes starring your possessed girlfriend and a weird light up fish that you must follow through particularly dark areas where you can be attacked from any direction. The stages mainly serve as backgrounds, but Damned does take you to many different locales from towns, forests, towers, catacombs, and even some trippy sequences involving traversing across your giant (and mostly nude) girlfriend. The levels themselves are separated and displayed on a papercraft map that serves as a loading screen that took me back to Ghost ‘n Goblins. Cool enough on its own, this style ends up being used multiple times throughout the game when Garcia needs to travel long distances and the game becomes a side-scrolling 2D arcade shoot-em-up. It employs the same weapons and darkness mechanics as the main game, but again, just as the game is about to devolve into repetition, something like this comes along to shake it up.

Of course, though, my favorite diversion actually involves the most awesome and divisive part of Shadows of the Damned: its sense of humor. You see, one of the variants of guns that Johnson can change into is called The Boner and at one point The Boner evolves into a powered-up version of the gun called, The Big Boner. The Big Boner is used to take down a series of giant demons during a turret sequence and Garcia can’t help but to exclaim, “Taste my big boner!” while shooting the giant gun. I was laughing my ass with every kill at this point. Yes, it is sophomoric and unfortunately things don’t start off too strongly, as getting used to the delivery of some of the first bursting-with-innuendo jokes takes some patience. However, shortly after the opening scene, the game hits its self-aware stride. It’s crude, it’s dumb… but it’s also damned funny. Somehow, the entire package of style just works to exemplify Suda’s mad genius.

The great one-liners in this game more than make up for any that fall flat. The over-abundance of boner jokes takes it past the realm of  tiresome to funny & ironic. I actually started to find myself being disappointed when I thought the game missed an opportunity for another joke. Throw in a few homages to Evil Dead and Ghostbusters, plus a nice catch phrase for Garcia with every boss battle and it was hard to wipe the smile off my face as I continued to headshot my way through every demon I encountered. Even if the humor isn’t your style, the bravado of Garcia paired with the cheekiness of Johnson will win you over by the end. 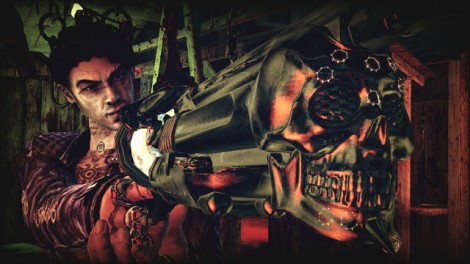 I want to hear that again

The voice acting is fantastic throughout the game. I was a bit put off by Johnson’s voice at first, as I didn’t expect him to be either light-hearted or British, but as the game goes on, it all comes together. Garcia does most of the talking and there are a few scattered encounters throughout for him to play off of others, but the bulk of the narrative comes down to Johnson and Garcia, who comfortably carry the game. It would have been easy to have the characters hate each other and bicker but their playfulness keeps the game’s tone lighter among seriously grim and twisted events. Shadows of the Damned could have worked as overly-serious and effective, scare-filled survival-horror experience, but the humor almost makes it endearing… if that’s possible for a game out of the grindhouse genre.

The sound quality doesn’t stop with the voices, as, not surprisingly, Akira Yamoaka’s (Silent Hill) soundtrack is a perfect fit. From the heavy metal motorcycle ride to the bizarre and funky sushi track, I wished I had preordered the game so I could get my hands on the physical soundtrack easier. The ambient music throughout the adventure manages to have the creepy undertones of a survival horror game, but enough of a personality of its own so that it can keep up with Garcia’s flare.

I could get nitpicky and go into some of my frustrations with small glitches and AI issues I ran into (sparingly) throughout the game. Shadows of the Damned isn’t a high budget, overly polished production. Most of the general issues exist in seemingly every other game out there that has licensed the Unreal 3 engine. Texture pop-in is noticeable, but none of the issues detract or break the experience.

No matter how you carve it up, Shadows of the Damned is a dangerously fun experience. There’s an undeniably great game formula buried beneath a maniacal underworld that will leave you cheering for gaming’s most memorable new hero, Garcia “Fucking” Hotspur. Demon hunting has never been so arousing.