I want to be great. Hell, I want to be famous. If there is anything I learned from A Knight’s Tale, it’s that in order to achieve these two things along side a kick ass modern day soundtrack, you need to be adept at the joust. I can’t just walk into my local hardware store and ask for training. I don’t even know what a Renaissance Fair is, let alone what it can teach me. My LARPing buddies think they’re cool, but I want no part of that menagerie. I turned to the one constant in my life, video games, and set out on my goal of greatness thanks to the lessons I learned from Joust. 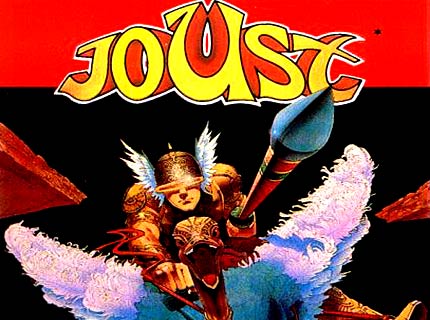 The Lessons of Joust

Ostriches are better than horses 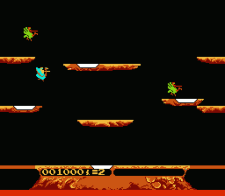 I'd be a sitting duck if I was on a horse.

I learned something today. In my quest for greatness, I had to seek out a noble steed as my mount. I traveled to India for an elephant, but Dumbo was too large. I went down the road to Churchill Downs to pick out a horse, but they just ignored me. Then, I remembered this place that raised ostriches. If that wasn’t a unique way to “joust,” I don’t know what would be. I purchased 3 immediately. I didn’t know how difficult my task would be. My partner, who liked to be referred to as Blue Knight, bought 3 as well. He thought he would help me out, sometimes. As you might know, ostriches can’t fly. They can run really fast, but flying is the last thing they want to do. Me and my boy Blue had to change the ostrich way of thinking. A strict training regimen along with a healthy diet finally worked. We broke them, and taking to the air made all of the difference in the world. We would have never been successful if we stuck to the old ways. Thanks, Joust.

There’s something in the lava

I learned something today. If you have ever read any fairy tales, you know that trolls are a fairly common enemy. Whether they be a part of the Department of Transportation, internet douchebags or just big meanies with huge clubs, they are always prevalent. However, I never expected them to survive near lava. Lava is always burninating the countryside whenever volcanoes erupt, so you would think that trolls would stay away from something that might hurt or kill them. I turns out that “lava trolls” actually exist and are quite territorial. You never see its face. You don’t actually know if it’s a troll in there or not. Though… what else would actually find a home in lava but a troll? If you ever go near an open lava pit, especially when flying atop an ostrich, beware of the troll hand. You might escape, but it is never easy. Thanks, Joust.

I learned something today. In a typical jousting match (based on my extensive Medieval Times experience) two knights atop horses gallop towards each other holding very long… spears. The goal is to knock the other knight off his horse and then, for some reason, jump off your own horse and… sword fight. All references to overcompensating aside, this makes no sense. Wouldn’t the knight want to gain the advantage by getting the higher ground? If we learned anything from Obi-Wan in his battle with Anakin, it’s that lower ground results in losing limbs to lava trolls. Getting above your opponent is the best tactic, otherwise you’ll have to use the more risky maneuver of stabbing those damn pterodactyls in the mouth. Thanks, Joust.

Those aren't birds in those eggs.

I learned something today. Recently, I read about monotremes, which are mammals, like the platypus or Knuckles, that lay eggs instead of giving birth to live offspring. Though those animals lay eggs, I had never heard of a animal turning into an egg when it perished. When I finally got my ostriches all trained up, I entered the tournament. After getting my bearings, I won the first joust. However, I was taken aback by the result of killing an enemy. He turned into an egg. I wondered if there was any documentation on this matter. Did Darwin get a chance to study these creatures? I’m sure his whole theory would be laughed at like the people who think the world is less than 10,000 years old. Thanks, Joust.

After all this work training ostriches and avoiding lava trolls, I’m not sure the art of jousting is really my cup of tea. But my boy Blue has decided to continue our legacy. Funny thing is he, took my yellow insignia when I dropped out. I might have to get back in there, take it back and finally kill that land ravaging pterodactyl. Blue won’t be able to do it on his own. Thanks, video games.