Even though history tells us that video games and movies don’t go well together, there is a new crop of movies based on video game IP’s that might buck the trend. Not too long ago, we heard about the Uncharted movie being directed by David O. Russell with Mark Wahlberg taking on the role of Nathan Drake. It didn’t turn out to be the take on Uncharted that anyone, let alone fans of the series, wanted to see. That project along with a Mass Effect movie and Rockstar registering Rockstar Films looks like they might try to change the way video game based movies are perceived and received. 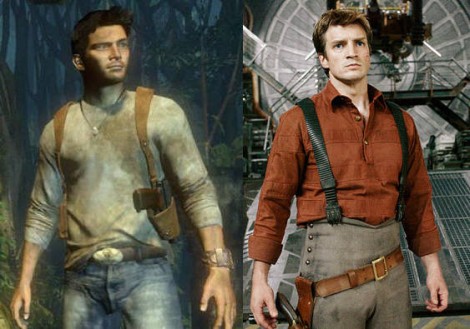 Fillion as Drake? We're still on board with this idea

The latest news on Uncharted is that a new director has taking the helm. According to Variety, Neil Burger (The Illusionist), has come aboard to tackle the huge operation of trying to bring the world traveling, treasure hunting Drake to the big screen. There hasn’t been any word on whether or not Mark Wahlberg is still attached, but let’s hope not. He had a relationship with the previous director (David O. Russell) who directed him in The Fighter. Nathan Fillion has always been the fans’ choice and he has even spoken out about wanting to take on the role. He would be perfect, but the studio might not think he’s bankable enough. The movie version of Uncharted is still a long ways off from even starting production, let alone coming to theaters.

Not much has been heard about the Mass Effect movie. We know that Legendary had optioned the rights of the video game a couple of months ago, in May. The big news about this one is the fact that Legendary is going to show something about this film at this year’s San Diego Comic Con. Legendary’s panel on Mass Effect will consist of BioWare’s Casey Hudson and the screenwriter Mark Protosevich whose credits include Cell, I Am Legend, the upcoming Jurassic Park IV, and this summer’s Thor. No information other than that is available right now until the Comic Con which is later this month.

On December 21, 2010 Take-Two Interactive registered a trademark for Rockstar Films. The summary of the trademark which was considered complete in mid-June states:

While the trademark doesn’t spell out anything specific, gaming fans can begin to speculate on which properties might see a movie tie in. I don’t know how a Grand Theft Auto movie would be produced, but if the storytelling Rockstar put in to Red Dead Redemption can be transferred to a different entertainment medium, than Rockstar Films will have products that I’m interested in.

I realize that there isn’t much actual “news” in this post. However, just that fact that these three properties exist is bound to get any gamer, including me, excited. I can’t exactly spell out the reasons why I would want to see these stories on the big screen other than I love them on the current media in which they exist. It is just something that I want to see. We’ll keep you posted on any new information coming out on these and other film properties in the future.